After winning an all expenses paid Hawaiian vacation for two from a local radio station, Jessica and her younger sister, Gloria, head to Honolulu with high expectations. Jessie meets and hits it off with a man who happens to live in the LA area, where she's from and is suddenly looking forward to returning to LA.

Gloria, a showroom dancer in Las Vegas hotel, also meets a man, Kino, a Hawaiian hunk, who is renowned for his lothario like exploits. Just when she's resolved to sharing his company as a summer vacation romance only, she discovers they have something compelling in common.

Is there romance after vacation with this Hawaiian godlike incarnation?

Gloria doesn't think so, but don't count Kino out

NOTE: This story has a loose connection to Bananaz and Bananaz II 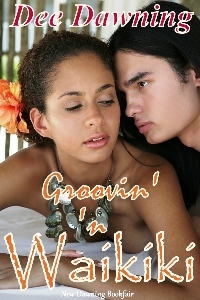 Happily Ever After Reviews

While nursing a broken heart and self-esteem issues, two sisters, Jessica and Gloria, head off for a fun filled all-expense paid vacation to Hawaii.

Upon their arrival they meet the sexy islander Kino who is instantly attracted to Gloria. Their steamy love affair begins to play havoc with their intense feelings for one another. Jessica meets her own lover, Del, who melts the wall that she has built around her heart.

Set in the lush tropical environment of one of the world’s most romantic places, Groovin’ 'n Waikiki will be sure to please Dee Dawning fans and recruit new ones. The heat literally leaps off the pages and satisfies to the very end.

Hurriedly, she stripped and casually walked into the shower. “I hope it’s all right. I changed my mind.” She squished her nose as she pretended to smell her armpits. “I smell a little ripe.”

He didn’t say a word, scanning her body for the longest time. She smiled through squinting, knowing eyes. “I don’t suppose I can borrow the soap?”

He looked at his hand that held the bar of soap. “Oof. Sorry.” He threw the soap and she caught it.

“Thanks, this water is kind of cold. Is yours?”

“No, let me feel yours.” He came over and she nearly jumped in the air as his beautiful cock brushed her thigh while running a hand under the water. “It is cold. Ahh, this knob was turned down. How’s that?”

“Much better, but I’m still cold. Do you think you could join me under the water and hold me?”

He stepped into the stream of water and embraced her, wrapping his muscular arms around her. He kissed her ear just under her curly ringlets. She gasped as she felt his hard weapon jabbing her in the back. She turned and kissed him back passionately.

“Ooh.” He sighed as she began stroking him, using the soap bar as a lubricant. Through repetitive groans, she whispered in his ear, “I need to make sure this is nice and clean since I plan on taking it into my mouth.”

She handed the soap to him and turned so her back was toward him. He started with her shoulders and worked down. Washing the sway of her back, he spoke, “What a sexy ass you have.”

She laughed and subtly parted her feet. The continuous spray of hot water and steam highlighted the ambiance of their liaison. She had gone from cold to warm in seconds, and with Kino’s help, was getting hotter by the second. Stooping to wash her ass and legs, his fingers explored her inner thighs and the wildly sensitive area just above. She widened her stance further and reached out to the wall to steady myself. Her eyes closed to direct every ounce of concentration on the divine sensations that were emanating below—from the erotic activities of his talented digits in her nether regions. Her heart raced and her breathing came in short gasps with each sensuous thing he did to her. When his fingers parted the crack in her rump, she bent over and stuck her ass in the air like a cat in heat. The invitation seemed to be too much for the Hawaiian hunk as fingers entered her pussy and anus simultaneously. She could barely stand—her legs felt like Jell-O. She spread her legs even more and locked her joints in place. Like the gymnast she used to be, she rested the palms of her hands on the tile floor and offered her ass up as if it were a sacrifice to this man/god.

“Don’t move.” She watched him run to his clothes, which rested on a bench beside hers. He pulled a foil-wrapped condom from his wallet, held it up for her to see and grinned.

In seconds, she quivered and gasped as he entered her ravenously hungry pussy. As the hot spray shot out from the wall directly to her ass, the mist swirled around them. The walls of her hot lubricous channel surrounded and clenched around him tight with each thrust of his godlike organ. Tremors of pleasure/lust spasmed through her with each hardy thrust of his magic wand.