Lady Tess Ashworth grew up with, and at fifteen, fell in love with Lord Gareth Caldwell. She has had seven years since they last met to mature into an elegant woman. And seven years to nurture resentment for the man who declared undying love, then married someone else.

Now widowed, Gareth has returned to capture Tess’s heart. But she has acquired a reputation as an adventuress and will not be easily won. To intrigue her into his bed, he dares her—she never could resist a dare—to join him in a ménage a quatre. Tutored by his deceased wife, he and his two mates have perfected the art of pleasuring a woman while sating their own appetites.

Tess accepts, but not for the reason he imagines. While Gareth is devising a means to thwart her uncle’s plot to murder her, Tess is devising her revenge for Gareth’s betrayal.

More From The Lady Dares

She smirked with a tilt of her head. “I am not easily won.”

“You will make me pay for leaving by keeping yourself from me when we both know what we desire?”

“I know what you desire.” She stood to run a hand across her bosom, down her abdomen, down to cup the part of her he wanted most.

“This? Is this what you want?”

He was fairly panting for it. Watching her from across the long gallery all evening, he could think of nothing else save the way he’d played with her body when they were adolescents and the way she’d played with his. He could taste those nipples, feel the warmth of those lush lips on his shaft. He’d burned then. He burned now.

She leaned back provocatively, elbows against the railing. “Then you must propose something inspired. Heighten my sexual desire with experiences as yet unknown to me.”

“I could frighten you with my inventiveness.” What he’d heard about her must have basis in truth. Damn the skies if he were too late, if her love were lost to him forever.

“Frighten me? Never. You may recall I ever accepted your dares and oft won our many wagers.”

“I recall everything about you.” He waited for a reaction. She gave him none. “Here it is, then.” Would this be the biggest mistake of his life? Would he alienate her with his unorthodox tastes or win her? “Did you notice the two gentlemen who accompanied me this afternoon when I arrived?”

“Yes, I commented to Daisy, my personal maid you met earlier, that you were the beauty, the huge one the ogre, and the other, perhaps, a delicate fairy-tale maiden.”

“Yes, Sir Brand Guiles is quite effeminate and foppish. He loves clothes and jewels as women do. And Damian Luth, his manservant, can be most brutish. We three have been mates since I arrived at my late wife’s abode.”

Tess pursed her lips and swirled to give him her back. She could not disguise her hatred of poor Lottie, though she knew the marriage had been arranged by his father.

“Are you not a bit off the subject of your inventive mind?” She bit off the words in a staccato rush.

“The men in question are part of my proposal.”

“Ah, how so?” After a pause, she faced him anew, a spark of mischief in her eyes. She once again became the Tess riding her uncle’s prize horse wildly over the moors, dipping unclothed in the lake, climbing treetops to spy on unsuspecting victims.

“Are you intrigued?” The world seemed to tilt on her answer.

“Possibly. Go on.” She tossed her head, raised her chin, and looked disdainfully down her nose. The Globe Theatre would have been proud to have her trod its boards.

“Are you quite certain you are courageous enough for my ingenuity?”

“Don’t be a bore. I am ready for any play you are capable of staging.”

“Here it is then.” He rose to confront her, wishing to gauge her expression when his words registered. He felt her sweet breath on his cheek, inhaled the aroma of cloves, and struggled mightily not to reach for her.

“We shall, Brand, Damian, and I…we shall, all three, have you and each other in one night of supreme pleasure for all.”

Not an eyelash flickered. She floated regally to the door of her sleeping apartment. “Inform me of the time and place. I am indeed intrigued.”

She leaned forward to give an ample view of her bosom. He did not wait for an invitation. With both hands, he reached inside to massage her breasts. The nipples turned to pebbles under his fingers. Damian inched up her skirt to give all assembled a view of silk-clad legs cross-gartered with grosgrain red ribbons. He slid his hand farther up and caressed the fleshy lips. Surprised, Tess jumped a bit, and then settled, laughing.

“You are a delight, my dear,” Brand whispered as he urged her into a prone position, still toying with her nipples. Damian began his fondling in earnest, massaging her nub, making it difficult for her to keep from creaming all over his hand.

“Do not hold back, lovie. Please me by coming into my hand. You must please us all night, and we shall do the same for you. You have but to ask for what you want.”

Gareth came to the other side of the bed, leaned across, and replaced Brand’s hand on her nipple with his lips. That was all it took, she pushed back into Damian’s hand moaning loudly as she spilled onto it.

“I will taste you now,” he said as he bent between her legs.

For a big man, he was exceedingly gentle, lapping her with gusto, but not so she’d empty again too quickly. Delightful sensations suffused her, sending her body into tensions she had not known existed. She felt as she imagined a snake felt, coiled and wanting to strike, but having to wait for the victim to move into place.

Someone removed the sleeves of her bodice and undid the laces to her skirt. She felt cool air on her breasts before she realized she wore nothing but pearls, stockings, and scrunched-up skirt. Then she was sucking cock, no idea whose, except it wasn’t Damian’s since she was well aware where he was.

Tess gave the cock in her mouth her all, circling the ridge and seam with her tongue and using enough pressure to pull in her cheeks. As soon as the delicious cock began to spout, it was removed, and another took its place. She licked to wet it.

“Harder, suck harder,” someone moaned, and she sucked harder. Unfortunately, so did Damian, and she lost concentration as she exploded into his mouth.

When she surfaced from a delicious orgasm, she resumed attention to the member ’tween her lips. Someone attached to a breast yelped as ejaculation spilled down Tess’s throat to her chest. They all laughed, and Gareth brought a dampened cloth to clean her face, hair, and chest.

“No worry, mate,” Gareth said as he helped Tess stand. “Do step out of your skirt, lovie,” Damian asked.

She unlaced it and let it slide downward and pool at her feet. Three sets of hands fondled her body as they helped her step out of her skirt.

Then, she was nude before three pairs of hungry eyes. She was flushed with the heat of their ogling and petting. Although she’d just had a release, two actually, she became wet again seeing three steel-hard male rods before her.

As Daisy had warned, they wanted her to pose for them in all positions. She wore nothing except her white silk stockings and the rope of pearls. First, they had her stand against the wall, arms raised over her head, one knee bent. They sat her in the rocker, propped her on floor pillows, on her tummy, and on her back, legs in the air. She posed against the bed bolster arms raising her hair, her rope of pearls looped over one breast, then the other. They had her cross and re-cross her legs, then spread them wide for an unobstructed view.

On her knees, rump in the air, seemed to be their favorite, and they requested it again and again. Finally, all three were gigantically hard and ready to use their weapons.

“Since I have not had satisfaction yet, I shall be the first to enter her,” Damian declared.

Gareth took him aside, but Tess interrupted. “Do I have no say?”

“Of course you do,” Gareth replied with a grin.

Tess laughed inwardly at his smug look. He was certain she’d choose him, the arrogant fool. She crooked her little finger at Damian. “Come here, biggie. I want you first.” She was gratified by the look of shock on Gareth’s face. It calmed the trembling inside her. Damian’s shoulders were broad, his visage comely, and his man part of a size to tempt any woman, yet doubts again crowded in on Tess. Would he fit in her little-used opening without some pain involved?

Be brave, she told herself. She could not falter so close to achieving her goal of denigrating Gareth Caldwell. He would crawl before she was finished with him. Head high, she reclined upon bed pillows in a provocative pose, arm behind her head, one knee bent, foot arched, breasts thrust forward.

Gareth sputtered. Brand clapped him on the back to quiet his protest. “No fair interfering. You know the rules. The lady’s wishes precede ours. Always.”

Damian’s joint expanded e’en more as he neared Tess. Doubts crowded in on her again. Could she handle this huge dagger, tame this fierce instrument? She was grateful when he lubricated the sheep’s bladder sheathing him. God’s blood, if it killed her, she’d give dear Damian the ride of his life and hope Gareth suffered through every gasp of pleasure she uttered, every praise she heaped upon Damian’s prowess. And judging by Damian’s determined look, she’d not have to fake it. 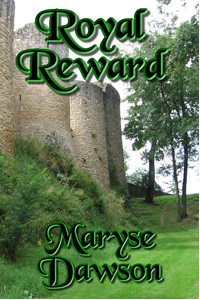