Trouble is brewing in Paradise, as Mark moves away from Blake and toward Todd. How can love survive when fear gets in the way? Things become complicated as Todd encourages Mark to spend time with him, going behind Blake’s back. It’s a good thing Blake has Clay to fall back on, to be his rock as Mark slips further away from him. The real test of their relationship is going to be the Homecoming Dance. But first there’s the matter of the class rings…

Nothing is easy and nothing is written in stone… not even love. 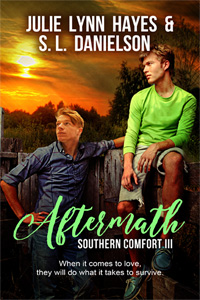 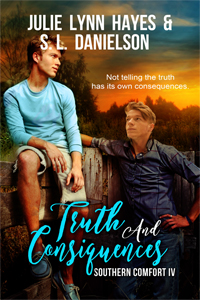 Mark Wittington eased his lanky frame into the hard, metal-backed chair. His business management course was just about to begin. Students filed into the room, glancing at their schedules as if to make sure they were in the right place. It was 11:00 AM—only one more hour to go until lunch. He was already bored despite it being the first day of school. He was tired of being given new books, tired of being handed novel-length syllabuses that threatened to put him to sleep—he was afraid to think what the classes themselves would be like. He was tired of seeing fellow classmates he’d gladly forgotten about over the summer. Face it, he was just tired of school. He already knew that he and Todd Benson, his co-worker at the Krystal Castle, as well as his one-time friend, would have four classes together, plus lunch. Much to his disappointment, he’d no classes in common with Blake, his boyfriend of three months. That was probably because Blake was following a more collegiate track, whereas Mark just wanted to graduate and get on with his life.

While he waited for the teacher to call everyone to attention and begin the usual first day spiel, he doodled in his notebook, his mind focusing on anything and everything other than education, but mainly on his boyfriend. Not that many people knew Blake was his boyfriend. That was the problem with being gay in a small Southern town that would be quick to condemn them if they knew. They couldn’t be out about their sexual orientation. They were forced to keep their relationship a secret from everyone, except their closest friends.

Mark ran a hand through his hair; it had almost grown past the tops of his ears already. He was glad his hair grew back so quickly. He was growing it out for Blake because Blake liked it that way, liked to run his fingers through the thick strands. Mark didn’t think there was much he wouldn’t do for the handsome blond boy who’d captured his heart. Except come out of the closet.

Mark focused on the paper before him. He began to sketch Blake’s initials, although discreetly, so no one could detect his true intention, or make anything out of it.

Being gay was dangerous enough in general, but in the small Georgia town of New Liberty, some might consider coming out to be a hanging offense. Closeted they were, and closeted they would remain. At least for now.

In another part of the school building, Blake Davis sat in his fourth period class—Concert Band. He’d brought his flute, naturally, but he doubted they’d ever get around to playing. This was just the way every school year started, with the director, Mr. Bartlett, going over what concerts they were playing, what some of their music would be, and other topics of band interest, such as the bake sale to be held in early October. No time to play.

He felt a nudge in his ribs and looked up, shaken from his daydreaming. “Check that out.” Violet nodded toward a young man who’d just entered the room.

Blake recognized him at once. “That’s Clayton Mitchell. Clay,” he corrected himself. “We’re in AP History and English together.” The newcomer carried a trumpet case in one hand, searching for his place among the brass players. Passing near where the two sat, he smiled at Blake.

“Very nice,” Violet said, giving him a nod of approval. Turning back to Blake, she asked, “Hey, gonna challenge me for first chair this year?” She grinned at him, as if daring him to do it.

“Nope. I like being second chair just fine. I know you’re better than I am, and that’s cool with me.”

“You’re not chicken of me ‘cause we used to go out, are you?” she teased him.

Blake rolled his eyes, playing along with her game. “Yeah, that’s it. You’ve got me shaking in my boots.”

He couldn’t wait to get home to see Mark again. It sucked that they had no classes together. Not even lunch. After band, Blake would go to homeroom while Mark ate. Then Blake would eat, while Mark went to his homeroom. Perhaps, if they were lucky, they could exchange glances in the cafeteria.

He pined for the stolen kisses in out of the way places, for the exchange of mysterious glances even during the rush of the workplace frenzy, the hint of the forbidden that came with a secret love. But even once his classes were done, he’d have to wait. Then would come an hour’s worth of marching band practice. He hoped Mark didn’t mind waiting for him since they drove in together in Blake’s car. Well, not Blake’s. Technically, it was his mother’s old car, and he got to use it. It was a compact station wagon, and it was nice. She’d gotten herself the same model but newer, in a different color. That meant that Blake could come and go as he pleased. Within reason, of course. Not like he wouldn’t tell his parents where he was going. And of course he was responsible for his own gas. But he was splitting the cost of insurance with his dad, and that helped.

Glancing casually around him, he noticed that Clay had found his place with the other trumpets. They’d compared schedules earlier, after their first meeting. They also shared homeroom/lunch, and chorus, it turned out. Blake found Clay easy to talk to. He couldn’t help noticing that the girls had their eyes on him already. Heaven help him with that. Blake was glad he didn’t have any such problems with the opposite sex. He’d given those up when he’d fallen for Mark.

His attention wandered back to Violet. She was openly bored, balancing her flute on her lap along with a spiral notebook. He glanced at what she was writing, a smile flitting over his face. “Mrs. Dylan Zurkowski? Seriously, dude?”

Talk of the Town
Caitlin Ricci
In Shelf
$1.99