Hope Miller has been through a lot. After being trapped in a basement, witnessing her mother’s murder by her father, then being shot, too, before her father killed himself, she’s not the most normal girl. But she has a plan—she’ll graduate high school, move out of town, and leave the memories behind. Part of this plan means tutoring other students, which brings her to the Carsons’ home.

Beast Carson has tortured, maimed, and killed, all in the name of business. But seeing the curvy woman in his library, he’s instantly intrigued. She’s his nephew’s tutor, and way too young for him. Determined to give Hope a new life, Beast promises her a future that she can’t say no to. There’s no denying they want each other, and when Hope asks him to teach her, he can’t refuse.

Lessons soon turn into something more, and Hope knows she can’t walk away from this man, even though her plans say otherwise. But Beast holds a secret that could tear Hope away from him. When she learns the truth will she stay? He’s her Beast, and he’ll fight to keep what’s his.

They were alone, in his library, and she held a book that suddenly felt like fire within her grasp.

“It’s okay to be curious. What do you like?” he asked.

She stared down at the book, and he moved her so that her back was to him. She wasn’t able to see his face, which unnerved her a little.

“You like seeing a man take his cock into his hand.”

“It’s a beautiful drawing,” she said.

“This is more than a drawing, Hope. It’s a temptation. Don’t you see that?” He reached out as she held both hardback covers, and he turned the page. It was hard for her to not gasp. That same cock was seen running through the lips of a woman’s pussy. “Our bodies are made for fucking. These are just pages, giving a glimpse of the real thing.”

She closed the book up, not even wanting to deal with that temptation, and slid it back into its spot. Her emotions were all over the place because all she could think about was a cock sliding inside a woman’s pussy as perfectly as that book did in that space.

When she turned around again, Beast was close. He placed one hand on the books beside her head along with the other one, staring down at her, trapping her against his hard body and the books. She didn’t mind at all.

In fact, there was nowhere else she’d rather be.

“What more is there to be?” she asked, tilting her head back, staring at him. She couldn’t look away, nor did she want to. With how close he was, she wondered if he was going to kiss her. His body was so close to hers, and she didn’t want him to back away. She craved his touch.

They were the only two people in the world as far as she was concerned. Anything could happen.

Her gaze went to his lips, and she bit her own. What would it feel like to have his mouth on hers, to take what he wanted without any thought from her?

No one had ever kissed her before, and she’d never wanted anyone’s kiss. Slowly, she placed her hands on his chest.

He was rock-solid, and she’d seen the gym that he kept near the pool house at the bottom of the garden. She had yet to see him work out in it, but that didn’t matter.

“I don’t care.” She didn’t have the first clue what she was doing, only that she couldn’t stop herself as she stepped close, bringing her body to his, finally feeling him against her.

One of his hands fisted inside her hair, tugging on the length, making her gasp as he pulled her head back. 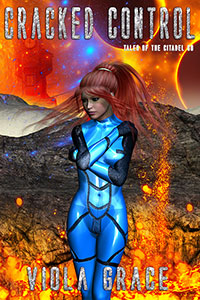