I’ll return for you. I vow it.

When Cami DuBois winds up on a Manassas battlefield, she stumbles across Confederate re-enactors too deep in character. One of the men looks at Cami and she feels an instant connection, a familiarity she can't ignore and a lust she doesn't want to. Until he vanishes before her.

Left in limbo, Christophe Sinclair is bound by his vow. Promising to return to his love after the end of the Civil War, he’s overjoyed to have his Camille back—and to truly have her in his arms again is his singular focus.

Christophe’s tie to Cami is strong, one that might defy the rules of space and time.

If the Voodoo Gods allow it. 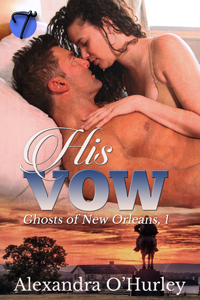 More From Ghosts of New Orleans

“Is it polite to point a weapon at a lady?” Jasmine smiled widely as she spoke.

Slightly lowering his weapon, the man eyed her closely. “What’re you doing out here? There are a few thousand men converging for battle. You need to seek refuge.”

The leader’s eyes swung to Cami after the last syllables dropped from her lips. His dark stare roamed over her, and a look of utter shock took over as his jaw slackened and his eyes widened. His uniform made her nose wrinkle as she glanced over him once more. He was quite handsome, even with the silly goatee and handlebar moustache he wore, although his overgrown beard was filling in around that from lack of upkeep. Make that stunningly handsome, even with all that facial hair and the rebel costume. He was all male, and her body reacted to his steely glare, even with her misgivings. There was a light in his eyes that pierced through her very soul and made her crave to grow closer, touch him, and crawl into his embrace.

His eyes raked over her from head to toe and back again, and she felt heat flooding her in response. Her nipples pebbled against the thin cotton dress she wore. Her body swelled, even with the cool air around her, and she felt a throbbing in her pussy. Cami wanted to jump up and run into his arms.

A chill moved down her spine. No one had called her Camille in years, not even her own parents. It was usually reserved for when she was in serious trouble as a child. Hearing it now made her uncomfortable, especially considering her emotional reaction to him. “Do I know you?”

“Camille, it’s me, Christophe. Has the war changed me so much?” He stepped closer to her, the air getting colder as he approached.

The war? Was he so deep into character that he couldn’t get out of it? Or was he simply crazy? “Christophe, I’ve never met you before. I don’t know who you are.”

“Ma Belle, it’s me. Your love. How’d you get here?” Christophe moved another few steps closer, a smile stretching his handsome face. Her heart began to beat harder again as his gaze locked with her own and she felt drawn into his enchantment. “I don’t know how you got here, but I’ve missed you so.”

He walked to her and pulled her close with one arm, lowering his gun away with the other. His embrace was ice cold, yet it warmed her through and through. Cami sighed as she melted into him, her brain fuzzy. She tried to rationalize what was happening, but her thoughts were drowned out by the emotional response of being in his embrace again.

Again? She’d never met this man, let alone been in his arms.