Kelly handed him the flashlight. He held it above their heads as she looked at the complex wires of what was probably a $40,000 car. She had a basic knowledge of a car engine, thanks to her father teaching her all the basics when she’d first gotten her license, but today’s engines were much more complex and mostly computerized.

Feeling her throat close on a pending sob, Kelly shook off the memory of her father instructing her with his tools. She wiggled several wires that looked like they’d been chewed through or singed by something. Kelly bundled the wires together and rerouted them into what she thought might be the alternator housing, thinking that may be hindering the vital connection he needed.

“These wires look a bit tattered, did you know that?”

“No,” he mumbled, leaning closer. His clean, rich scent assaulted her nose, nostrils that weren’t accustomed to a fragrance as intense as his.

Their eyes held. Their faces inches apart. She leaned away slightly, thinking she’d felt his warm breath on her mouth. God, I hope I don’t stink. She’d just taken a shower two days ago, but it was hard to keep the odors out of her hair, which she kept tied up.

“I’m gonna go get some electrical tape and see what I can do,” she told him, stepping back.

He walked around the car and sat down in the driver’s seat to wait. Kelly wiped her hands down the front of her jeans and headed for the restroom.

Sam had been generous enough to leave a Rubbermaid bin on the floor underneath the sink for her with an assortment of items. Sam really wasn’t a bad guy, just ornery at times.

Kelly ran over to the side of the building and went into the restroom, retrieving the tape. She kept her eyes on him as she quickly walked back to the front of his car. He was back on his feet, his back to her, his white dress shirt an iridescent reflector in the dark.

She wrapped the wires, feeding them through and securing them inside. When he returned to the driver’s seat and turned the key, the engine suddenly came to life. Kelly lowered the hood, closing it gently. The car door slammed closed before the window lowered between them. He glanced up at her.

“Thank you. I’m Drake, by the way,” he said, extending his hand. Gelled waves of hair fell over his brow, his appearance fading in the late hour. Kelly’s gaze dipped down to his outstretched hand. Hesitation barreled through her at the thought of disclosing her name.

“My hand’s all oily,” Kelly said, her words rushed.

You’re nothing but a homeless loser. He won’t remember you by the time he gets to the nearest intersection

“Kelly…Kelly Jenson. Glad I could help,” she said dryly. Did I just give him my last name? She backed away from his vehicle, waving. “Have a safe trip,” she called, not wanting to continue with any sort of conversation. Kelly quickly turned and moved toward the woods, wanting to slip back into the darkness, unseen and hopefully forgotten.

She sat down, suddenly feeling exhausted. She’d find Steve tomorrow and thank him for the sandwich. Despite the darkness, a thicker gloom seemed to slowly drip over her. Seeing and talking to people like him just made her circumstances all the more ugly.

Kelly sipped from the elegant champagne flute. Crisp, cold bubbles prickled down her throat, chilling her insides before everything ignited out of her control. Drake was stunningly handsome.

Corded muscles and raised veins ran over his tight flesh. He was art. Curved biceps and sloped thighs only enhanced the decadent gift that was the focal point of any man, nestled below an abdomen that she could bounce a quarter off of.

His cock was at full mast, stretched outward, its ribbed flesh smoothing with energy and strength. Splashes of inky hair sprouted from his skin right where it should be. His nipples were perfect, like the delicious beans of an exotic coffee she wanted to nibble and chew on.

Kelly set her drink down on the wide rim of the tub and scooted out of his way. Drake’s eyes held hers as he gracefully stepped into the tub. He lowered himself into the water and reclined back. Water ran over the rim, slapping the tiled floor, as their bodies shifted. His hands steered her shoulders, pulling her back into his chest. Their heat joined, enveloped by the water. His voice went deeper, reverberating into her back.

“I want you to relax. I feel your joints tightening. That’s not the goal I have in mind,” he said softly, kissing that responsive spot behind her ear. “Easy, let it all go.” His instructions were riding on a sigh.

Kelly sank back into him, acutely aware of his cock. Its hard heat snaked along her spine, teasing her with its intentions.

“That’s it,” Drake said, coaxing her. “You’re so incredibly beautiful.” Wet warmth traced the shell of her ear, his tongue skilled and clever. His legs opened wider for her. His hands smoothed over her body, giving her the hot, wet touches of an experienced masseuse.

The water level rimmed her body, right at her breasts. Her nipples beaded, poking through the foaming suds. Water fluttered against her body when Drake moved his hands. His palms gently covered her breasts, forcing a hissing breath from her lips.

“Let me soothe and pleasure you, please,” he said, speaking through a mouth that was busy and attentive. His cock slithered against the small of her back, a gentle reminder of a pending promise.

His touch was electric, recharging her body. As his hands neared her center, her inner core stirred, inflamed with a need that was so great. He was awakening her, resurrecting a body that’d been out of commission for ages. His fingertips were soft. Drake gently spread her legs. His touch slowly slid through the layered tissues of her pussy, finding that nub of nerves that gave such intense gratification.

Drake stroked the edge of his thumb over her clitoris. Kelly closed her eyes, soaking up the feel of his hands on her. His other palm slipped under her knee, pulling her leg back to achieve greater access. When his finger ventured inside her body, all reality was lost.

“Drake,” she whispered, her voice edgy.

“I’m right here, let me touch you so you can feel,” he said, his words slow and hypnotic. Another finger joined the first in a rhythmic thrust and retreat that was turning her body inside out. His free hand returned to her pussy, petting her clit, scoring through her folds, both hands in sync. “I want you to come, say my name through your orgasm, please, Kelly,” he begged. His chest lifted behind her back. Their breaths became unified, now matching and erratic.

Her toes curled. Drake opened her wide. He had her vulnerable and starved for more. Her forehead beaded with either sweat or steam. The air was weighted, thick like a fog after a heavy rain. Kelly lifted her leg, anchoring her heel on the rim of the tub.

“That’s it,” Drake groaned, his chest heaving behind her. His hands worked faster. His fingers plunged in and out of her body while his other hand worked at teasing her clit. Kelly lifted her hips, suddenly wanting to demand that he fill her body with his. It was a barreling rush, seconds of an irrational state that she couldn’t see through. Her ribs caught, stuck and struggling for air. 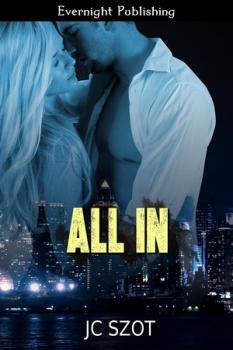