We’ve all seen them, those boney women with straw hair that resemble brooms more than lovers. What guys crave are real women with real bodies, built for comfort and ready for action. These women are cute, soft, and cuddly. Real women who want real things in life, and a little fantasy to spice things up. They are the HOT COMFORTABLE WOMEN. 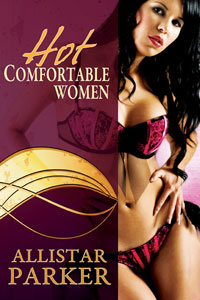 After the ride home across the mountain, Ginger was ready for some action. She knew the boys would all be out and about in their cars, at least the boys she cared about. Her sister might have been a prude, but she certainly was not. With her short legs, shapely butt, and breasts out far enough to hide a gun in her cleavage, she was built like God wanted her to run wild. She listened for her parents to climb the stairs to their bedroom before inching the window open. It was midnight, just before Daryl was supposed to meet her in the field with his car.

The stroll to the field gave her time to light a cigarette, and start a fresh stick of gum. Her ponytail bobbed back and forth, as she waltzed her way down the sidewalk. Turning by the old gate, she followed the white painted fence to the Mustang parked by the swing set. Right on time.

Daryl leaned against the posts, smoking a cigarette. His long shirttail hung over his jeans just enough to entice a glance from Ginger.

“Nice bulge. Think you are getting somewhere, tonight?”

Daryl pulled a long draw on his cigarette. He didn’t respond to her remarks. Smoke slid from his nostrils as he rolled his eyes up and down her full length. Ginger could feel each eye flutter across her bulbous breasts, curvy hips, and short legs There was a heat to his stare that she felt in her spine as he purposely gazed at the telltale camel toe visible in her pants. She knew her body was the hottest ticket he would see that night and she enjoyed the fact that he was visibly staring at it.

“We could stay here at the park for a while.” Daryl crushed his butt into the grass.

“Aren’t the guys waiting for us at the coffee shop?”

Tense seconds passed as he thought of another response besides yes. “We’ve got time. They won’t leave before midnight.”

Her hand slid in her pocket. “We could go to the car.”

Kicking her tennis shoe along the ground, “It’s too wet. Let’s just drive to the coffee shop and spend some time with the others.”

Ginger walked over to him, holding out her hand. A gentle pull freed him from his leaning and helped him along the path leading to his car. The grass was wet and freshly mowed. She just didn’t think it would be too romantic.

Ginger slid into the front seat of his Ford, a blood-red 66 Mustang built for speed. The newly installed red interior still smelled of leather, even after being several weeks old. Her body began to feel a strong vibration, starting in her groin and reaching all the way to her lips as Daryl turned the key and brought the monster alive.

A slip of the clutch and the wheels squalled loudly as he flung the car around the corner. With each shift of the transmission, Ginger sank into her seat a little more, covered by that riveting wailing of the exhaust. Wanting more than just a fast ride, she grabbed his hand from the shifter, sliding it a little ways down the waist band of her pants, just enough for him to feel the soft hairs at the top of her pubs.

A smile rolled across his face. “I knew this beast would get you.”