Spike is known for messing around, constantly taking whatever pussy he wants. He’s loyal to his club, and would never dream of changing who he is. One night after a party, he decides to take to the road, to clear his head. Something is wrong with him. He no longer wants the club pussy, nor does he get off on watching them be fucked.

That one late-night ride changes everything.

Star is used to being bullied by people. Even though she has dropped several dress sizes, they still bully her. Now a very handsome man is protecting her, and it is … surreal. He’s a biker and he’s dangerous, but she can’t resist.

How can it be possible for two strangers to find happiness? Can Spike share his club with her? Does he even want to? Or will they keep that distance between them forever?

He placed his hand on her hip, trying to keep her still so that she didn’t feel the pressure of his dick digging against her ass.

Her body was so soft and curvy compared to his. He was having fantasies about her pussy wrapped around him, and that was not helping.

She did as he asked, and turned her face toward him. “It’s horrible.”

“The taste will grow on you.”

He sipped his own beer, and when he couldn’t stand it anymore, he took her bottle from her, and led her onto the dance floor.

“You seem in a really weird mood tonight,” she said.

Spike took her hands when she held them by her sides, and placed them on his shoulders. “You have no idea what you’re doing,” he said.

“As a matter of fact, I do.” He placed his hands on her ass pulling her in close. Not caring that she felt his erect cock, he focused on her. The rest of the bar fell away until it was only the two of them.

Her cheeks were flushed, and he watched as she licked her lips. Even though they were in a crowded room, he wanted her to feel surrounded by nothing but him.

“I wonder if I could make you change your mind,” he said, knowing he was confusing her. She didn’t have a clue that he wanted her, and that he was trying to seduce her.

He swayed her hips, keeping her against him. With one hand on her ass, he used the other to sink into her hair. He was much taller than she was, so he could easily command her to do as he wished.

“There is one thing I want to know,” he said.

He slammed his lips down on hers. Plunging his tongue inside her mouth, he finally tasted her. For the past three weeks, every single night when he’d watched her leave his bike, he had been wanting to know exactly how she tasted. 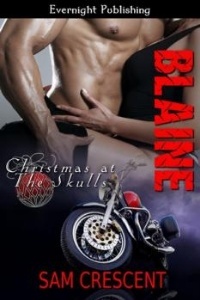