In the Beginning (MFM)

Love Beyond All Dimensions 4

Margal, a beautiful young healer, leads survivors to new lands as storms devastate 6000 B.C. Norway. They discover entire villages washed away and countless lives lost as they paddle south to Denmark, a route given to her by the spirits.

Her destiny is revealed when the Universe places Jailan and Eirkr on her path. She is to create many offspring to blaze a trail into the future. Eirkr is attainable, but Jailan is not. He becomes her hearth mate when their parents join. He is also the son of her new leader, a man who makes her life difficult.

Can love break old taboos as she strives to achieve an unheard of status: female with two mates? Slip back to an ancient time where men protected their women and women willingly cared for them. Discover that love and passion were always there—in the beginning.

In the Beginning (MFM)

Love Beyond All Dimensions 4

4 CUPS: "Margal knows she is different. As a healer, her word should be law but there are those who oppose what she has to say. Jailan is her true mate but many obstacles stand in the way of their happiness. The most major being that when Jailan’s father and Margal’s mother unite, it makes them hearth mates and they are not allowed to be sexually involved. Eirkr is Margal’s other mate. He keeps her sexually satisfied even as her heart cries out for the man who is not available to her. Margal, Eirkr, and Jailan start on a journey that contains passion, danger, and a change that will rock the foundation of their people’s beliefs. Can Margal get her fellow villagers to see that she has special needs that can only be met with not one, but two mates? Will the taboo of having a hearth mate being her one true mate be breached? But most importantly, will Margal finally get the respect and understanding that is needed in order for her to become the great healer she is destined to become? In the Beginning has a very strong plotline with solid characters and vividly decadent scenes. Ms. Water takes the reader along on Margal, Eirkr, and Jailan’s journey as their paths cross time and again to shape their futures. This tantalizing tale not only encompasses the erotica genre but includes important subject matters such as prejudicial thoughts in Margal’s community. A highly hedonistic read with wonderfully strong characters and scenarios, this book will give you the entertainment you crave." -- Danielle,Coffee Time Romance

More From Love Beyond All Dimensions

“I agree, no more talk,” he whispered in her ear. His warm breath caused shivers through her body. When he kissed her ear she melted into him. Mar went willingly as they led her to the furs.

Eirkr kissed her lips before trailing a path over her breasts and down to her pussy. When his tongue slipped inside, she moaned softly. He licked and sucked around her clit and then backed off slightly. He did this repeatedly, her pleasure building to a higher level each time. She’d forgottenhow skilled he was with his tongue. When he finally began to suck on her clit, she gasped. She hadn’t pleasured herself in moons, and the sensations he aroused were exquisite.

Jai lay next to her and stroked her hair. His eyes never left her face. “You are beyond beautiful, especially when aroused,” he whispered. When she gazed up at him, the lust in his eyes filled her with even greater excitement. Suddenly she wanted to try something she had always wanted to do.

“I want you both at the same time,” she uttered. Jai’s hand on her hair stopped as he gazed down at her. He gave her a slight grin and got on his knees. When he poised above her to lower his cock into her mouth she shook her head no.

“No, Jai, not in my mouth, but inside of me. Both of you,” she panted. Eirkr lifted his head at her words and got on his knees.

“Mar, you and I tried that before, remember? You did not like it,” he said softly. She nodded and sat up.

“I’ve always wanted to try it again. Now is the time,” she said. “Get me my herbal basket, Eirkr.” When he rose to get the basket in the wall niche, she admired his tight buttocks and strong back. His body was chiseled to perfection. Jai leaned over and suckled her breasts. She moaned loudly when he squeezed both together and got both nipples in his mouth.

When Eirkr returned, he passed her the basket, and she rooted around until she found the plant extract. Then she slathered his cock generously with it as Jai watched.

Then she turned to Jai. “Lay down,” she whispered. He obeyed immediately, and as soon as he lay down Mar lowered herself onto his thick cock. It slid in easily. Immediately he grasped her hips and began pounding her. As she buried her face in his neck she breathed in his scent. It drove her wild with lust. But before they could get lost in their fucking she pulled off him a little. They were both panting heavily.

“Eirkr, do it now. Use more extract if you have to,” she growled.

“And watch where you put that thing,” Jai ordered. She laughed out loud and then bit his neck playfully.

“We’re trying to be serious!” she laughed.

“I am serious,” he laughed back.

“Both of you be quiet,” Eirkr said. She heard the laughter in his voice, but at least he managed to keep focused. When she felt him enter her anus she winced and pulled away a little. But he didn’t withdraw. “Shh, Mar, it’s okay,” he soothed.

Jai stayed motionless beneath her, but he did begin to kiss her ear. She moaned softly. He knew that was the one thing that always melted her. Eirkr kept pushing in a little bit at a time, then stopping. It stopped hurting once he got past the outer rim. All the while Jai kissed her neck or suckled her breasts. Soon she had both men fully embedded inside of her, and she wondered if one could actually die of pleasure.

“Can I move now?” whispered Jai.

She simply nodded and moaned. Speech was incomprehensible to her. When both men began to pump their hips she moaned even louder. It was the most incredible sensation she had ever experienced. She rode up and down Jai’s cock as Eirkr held her hips firmly. He almost slipped out several times, but he managed to hold on tight.

When she began ramming herself down on Jai very hard, his head rose off the pillow, and he cried out her name. She felt his thighs twitch as his body shuddered with release.

She buried her face in his hairy chest while Eirkr pounded her from behind. She had no idea it would feel this good. 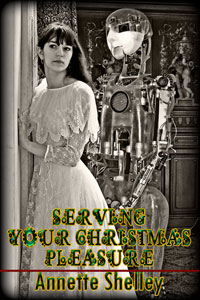