This novelette also includes a bonus read of the first chapter of "Blackout." 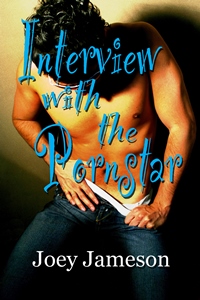 “So…Why porn?” Max’s question shot through the air like a bullet and with just as much repercussions. He studied Adison’s face for a moment, trying to get a sense as to how this path would go over. To his pleasing, Adison’s eyes flashed their arctic blue stare and a sly smile began to twitch at his mouth. He inhaled a deep breath through his nose, causing his muscular chest to rise. A moment passed between the two men which only added to the tension in the air.
“I bet when people read this they’re going to be expecting my story to be a tale of woe and despair: I was abused, I hate my mother, and all that crap,” Adison waved his hands dismissively in the air for emphasis. “And I hate to disappoint, but...”
“No abuse?”
He shook his head in response. “I’m afraid not. I come from a great family. Mom and Dad have been together for thirty-some-odd years, I’m the youngest of four, three sisters all very well educated, mother was a dentist and father was a writer.”
“Wow, well it seems like you were born with a silver spoon, if I may.”
“So how did I end up like this then, eh?”
That same flirty smile from before danced across his lips again. Adison leaned forwards in the booth, closing the distance between him and the writer. Maxfield realised they were close enough for him to smell Adison’s breath. Without thinking he inhaled deeply; it was fresh and minty as it invaded his nostrils.
“Fact of the matter is, I’m here…Doing what I do…Because I love sex.”
The way he spoke the last word sent an odd sensation running up and down Max’s arms.
“I have since my very first time.”
Adison had Max’s eyes in a stronghold. “Do you remember your first time, Max?”
Max swallowed, unsure as to what or where this tingling sensation he was feeling was coming from. “I do, but I have a feeling it pales in comparison to yours.”
“Was it with a man or a woman?”
“Uhh, a woman,” Max answered once again slightly uneasily.
“Hmm,” Adison murmured through pursed lips. “Can’t say I’ve ever been with a woman, myself.”
“Really? Not even when you were younger?”
“Especially not when I was younger.”
Max tilted his head as if to question why.
“My first time was something of a revelation, that afterwards, I knew there was nothing on this earth that a woman could do for me that a man couldn’t do a hundred times better.”
“But how can you be so sure if you’ve never-”
“Trust me. From that very first time…I knew.”
“Well please, enlighten us.”
Adison moved on to his martini and without breaking eye contact, took a sip from the glass. Like a seasoned vet he raised a hand in the air and snapped his fingers to get the waitress’ attention, who was surely hanging very close by in case she was needed again. Without even looking over he held up two fingers to signal he wanted more drinks. Adison was used to people being at his beck and call and loved showing off the ‘powers’ he held over others.
“I hope you have enough battery power left Max, cause you’re in for a bit of a ride.”