When Nola Delaney retreated to an old fishing cabin on Caddo Lake after a robbery, she sought nothing but solitude and healing. As she adapts to life on the mysterious, beautiful lake, Jean Batiste Loutrel shows up with a stringer full of fish and a neighbor’s welcome. Nola needs a friend and Jean Batiste, Johnny to his friends, offers the richness of their shared Cajun heritage.

Their friendship soon evolves into something more but Johnny has a secret—cursed by a voo doo woman, he can shift into a alligator. Love may not be enough for a happily ever after unless they can figure out a way around the curse so Johnny can be all man once more. 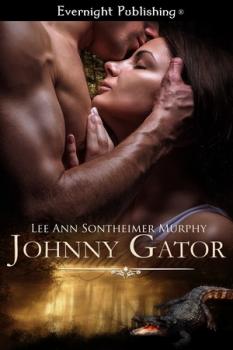 He frowned. “Something happened to me, something that changed everything about my life and who I was, cher. That’s all.”

Nola noticed how he’d begun to fidget, hands twitching, feet tapping. He didn’t seem able to remain still, consumed with nervous agitation. “What was it, Johnny?”

Her voice dropped to a soft croon. She wanted, no, needed, to know.

When he replied, his eyes had changed from emerald to almost black, dark with inner anguish. “Nothing you want to know about, woman,” he said. His voice became almost a growl. “I shouldn’t have said nothing at all. I gotta go home anyway.”

How did this happen? Nola had no idea but their quiet, easy evening had turned emotionally volatile. I’m upset, he’s upset, and I don’t have any idea why. She cared enough to try to find out. “You know what happened to me,” she said. Keeping her voice level was a struggle. “I’m not going to judge. You can tell me. We’re friends, right?”

Johnny muttered a few sentences in Cajun French, too low and fast for her to follow. Then he stepped closer. “We’re neighbors,” he said. “Friendly neighbors—but it’s not what I want, boo. But I can’t have what I do want, not in this world or any other, not now.”

“What do you want?” Her outcry came from desperation.

“You, cher,” he said. “I want you in every way a man can want a woman. But I can’t have you and I know it. Don’t you know it tears me up every night and day? I keep coming back for more and wanting more.”

All the feelings that had simmered for more than a month boiled over. “I want more, too, Jean Batiste. I want you, too.”

He groaned like a man with a bellyache and wrapped his arms around her. Sweet baby Jesus, he had a powerful grip, and when he locked Nola into his embrace, she gloried in it. She had waited so long for this moment and savored it. When she ran her hands up beneath his T-shirt, his skin wasn’t warm the way she had expected. She stroked the cool, dry flesh and marveled at how rough it was beneath her fingers. Johnny touched her, his hands almost reverent as they moved over her body. He planted one hand behind her head and leaned closer.

When he kissed her, her world rocked on its foundation. His lips caught hers and held them tight, fastened together with a mighty pull. His urgent hunger matched her own and she kissed him back with everything she had to give, amazed and pleased her absent desire had awakened. Johnny’s mouth called her out and made it impossible to hide the emotions she’d been harboring any longer. Nola had been aware from the first time he showed up that she liked him enough to trust him, but over the weeks her feelings had grown into love. Until now, she hadn’t dared to name it or believe it but the evidence existed in his kiss and her response.

Johnny kissed until she had no breath but Nola made no effort to end it. Delicious, sweet sensations traveled from her mouth throughout her body. Her limbs went limp, her nipples turned hard, and her pussy grew wet. Every neuron in her system screamed with pleasure and the marvelous anticipation of longing for more. The kiss brought more physical response and emotion than sex with any man she could remember. This packed a punch and the intensity was strong enough to overwhelm all her senses.

Just when she yielded to it with her total being, he pulled his mouth from hers. He gripped her upper arms and pushed back until they stood separate. Panting, he stared at her, eyes glittering like bright stones. “Cher, I’m sorry,” he gasped.

His passion vanished and anguish twisted her features. “You would never believe me, Nola. And it’s better if I don’t. Believe me.”

“I need to go,” he said. His body twitched from head to toe and he winced.

Nola didn’t believe it. She scrutinized him. He leaned forward, arms and legs extended in such a way he appeared to be about to drop down on all fours. If she didn’t know it was impossible, she would’ve sworn his back appeared broader and his face somehow longer. “You look like you’re in pain.”

He grunted out a few words. “I’ll be fine. I’ll see you maybe tomorrow or the next day.”

A Place to Belong (MFMM)
Becca Van
In Shelf
$4.99
Tweets by
sirenbookstrand