The Eagles of Great Wing 4

The Eagles of Great Wing 4

More From The Eagles of Great Wing

Weston had seen it all, witnessed the way they worked. After six months they were a well-honed partnership, she, Dion, and Jag. That was why it made such sense for them to team up full-time, as a trio. They’d give each other support and sexual relief, and they were at least fond of each other. Robyn would go so far as to say she loved her tiger cowboys. And that obsession she felt whenever Weston touched her or communicated with her? It scared her.

She shoved the thoughts away and despite her fear, opened her mind to Thane. The tingle, a bit like a low electronic hum was stronger now. They were approaching a series of doors, each of which had separate security locks. They easily bypassed them with the right authorization, and thanks to the man they’d overpowered a few corridors back, they had it. A few card swipes and finger presses later, and they were through.

The blast of desperate longing from Weston nearly made her reel, and then Robyn discovered it wasn’t just Weston. The unthinking, instinctive part of her cried out for joining. Thane was so close. If it weren’t for the two guys with her, she might have thrown caution to the wind. Experienced though she was, the urge to run through the featureless passageways to where she knew he was waiting almost got the better of her.

A thread of consciousness wound its way through her to Weston. It was combined with bewilderment, a strange, needy wanting and confusion. That wasn’t surprising if they’d kept him out most of the time. Her mind shied away from what they must have done to him.

The Grid wanted his sperm, her mind told her, despite her efforts to concentrate on the task in hand. Since shape-shifter sperm died shortly after emission, the only way they could get it was from a live shape-shifter.

This time she succeeded in blocking it out, and she suspected Weston had helped her with that, because the barrier was better than the one she’d constructed alone. He confirmed that when he said, “Keep safe. I want you back here when this is done.”

Those terse words meant far more to her than they should have. He cared, despite his resolution not to. He was concerned with her, not just his breed partner.

At last they were through, and they found themselves in a surprisingly busy place. By keeping to the wall, they stopped people noticing them. Even if they’d been wearing the white coats that seemed to be normal here, they would have been noticed because they were strangers. They didn’t have long to grab Thane and get out of there, now they were through the secure areas.

Someone would notice when they didn’t get back from their lunch break, and then hell would break loose.

Thane’s presence dragged at her with an insistence that sent her nearly mindless. She hadn’t imagined this kind of pull. Oh yes, she’d known it would be strong, but not like this. Not as if it was a choice between breathing and not breathing. “He’s along here,” she said, indicating an area where she could see two people moving, one into a room and one out. “Speed or stealth?”

“We don’t have a choice,” Jag said grimly.“Speed. You go for Thane, we’ll get the women. On my count.”

The whole team waited while he counted down. “Three, two, one, go!”

She burst out of her hiding place, head down and racing for the room where Thane was. Once in, she didn’t look back, but kicked a woman who was entering out of her way and found something to keep the doors open. A wedge. She didn’t want them locking her in.

Weston was in her mind, but heavily controlled, as if forcing back every emotion.

Thane lay on a gurney, a light sheet covering him. When she entered, his eyes cracked open, a gleam of blue showing through the reddened skin. His skin was dry, but she didn’t see any marks. A line from a drip went under the sheet. When she tore away the covering she discovered a single drip to his arm, which she eased out of him. Despite her haste, the need to cause him the least amount of hurt went deep, and she couldn’t have ripped it out.

His arms and ankles were padlocked to the gurney with leather straps. Instead of fiddling with the padlocks, she took her blade and sliced through them all. Thane moaned and lifted his hand to his head. “Fuck, that feels so good.” He mumbled his words but she sent up thanks that he was conscious and not raving.

Predictably, he wore nothing. They’d catheterized him so she got rid of that, too, and the monitors checking his heart rate. She was slightly surprised not to find something attached to his dick apart from the catheter, but relieved, too. Her vivid imagination had provided images something like a milking machine that farmers used on cows.

“We’re getting out of here. Can you walk?”

“Robyn?” he said, dazed, blinking at her. The bright light in the ceiling must have shone directly into his eyes, dazzling him.

The bastards had done only what they needed to keep him alive. Drips containing narcotics and nourishment, and monitors to ensure his basic functions were working. She’d seen it before, though she didn’t know precisely what drugs they used. She knew the drill. She hadn’t expected such rage to consume her, to see this man brought to a mere thing, something to be used. A person without a soul.

An overwhelming urge swept over her, to hold him, soothe him and stop him hurting. She could feel his pain, the agony of spirit that they’d brought him to.

“Cut off, Robyn. Let go, we have to separate.”Weston sounded desperate. For her, not for him.

Weston flipped the blankets back over the bed and laid her on them. The slight roughness abraded her skin deliciously and she moved on it to get more of the sensation against her sensitized skin. Weston groaned, and reached for the bedside drawer. Without taking his gaze from her, he groped inside and drew out a linked string of condoms, tossing them on the top of the nightstand. All except one, which he tore off and opened. He watched her as he rolled the protection over his cock, deliberately, with intent.

Almost afraid of the intensity of his gaze, she glanced to Thane, who was coming down on the bed beside her. Every trace of his trademark lightheartedness was gone, that lazy smile nowhere to be seen. Instead, he stared at her, his light eyes stark with need, his mouth slightly open, showing sharp white teeth. With a groan, he bent to her and kissed her, his tongue lashing into her mouth, unfurling with whip-like accuracy. That spank on her bottom, light though it was, tingled back into life and he spoke into her mind. “I felt that.”

He spanked her again, but this time against her pussy, tapping her mound and catching the tip of her clit. She gasped into his mouth and arched up toward him.

Weston kissed her throat, then touched her breasts, cupping and teasing, before he tapped. The tingle, the slight edge of pain sparked a reaction inside her and it went straight to her cunt. “Fuck, you are hot as July in Texas,” Weston said, and slapped her other breast, but not so hard as to cause real pain. Thane did the same to her pussy. “Rosy cheeks, hot cunt,” Weston murmured against the soft skin of her breast. “Isn’t that a saying?”

Robyn couldn’t reply because Thane was still kissing her, lavishing her mouth with his caresses, as careful as his slaps. He drummed his open hand against her pussy, not attempting to open her up or do anything except give her what she’d never realized she would enjoy. “Shall we stop?”

“Fuck, no!” she answered instinctively, from some deep well within her that these men had uncovered. Something she’d never suspected before, how an edge of pain could titillate her, and turn damp into wet.

Weston sucked her nipple deep into his mouth, and then nipped, before turning to sucking and licking. A series of licks and nips, unpredictably delivered by Thane. His caresses changed from taps to pulls and pinches. He spread her labia and plunged inside her, taking her with one finger.

A wicked finger that stroked and curled inside her, beckoning her to join in, to come and take what she wanted. He, pulled out and she wanted him back, but he moved further down, to the soft area between her channel and her ass.

Would she let him? So far they’d given her two huge surprises, both of them amazingly wonderful. First, that she could please two men at once, and secondly, that she enjoyed the pleasure-pain idea she’d only ever read about before.

Of course she’d let him.

He circled her asshole, gently raising the sensitivity, making her want to take him, to use him, and to accept anything he had to give her. Then he slipped it inside, just the tip. She squirmed, not sure if she wanted this.

Thane moved his finger away at Weston’s sharp note of warning. Weston removed his mouth from her nipple long enough to say, “Another time.” Thane finished the kiss and they both watched her. “We’ll do that, and we want it, never doubt it, but not today. Not now. If you let us play, that’s enough.” Thane nodded his agreement. His lips were swollen from the kisses he was delivering her, and he bent his head to give her lower lip a playful nip. “I guess I’ll just have to make do with fucking your brains out.”

She’d never liked that expression before, but she’d let Thane do whatever he wanted. As long as he didn’t take too long, because she was burning up for him. And for Weston. This was so, so confusing.

Weston kissed her, as brutally as Thane, but in a different way, licking into her mouth and taking possession, working his lips over hers and moaning. When he moved to straddle her, Robyn opened her thighs wider and lifted her knees, letting him settle between her thighs. His cock probed insistently at her entrance, and she squirmed, shoving her wet clit against his groin as he came down onto her.

He worked his cock into her. He still had to ease himself in, even though she was wetter than she’d ever been in her life, eager to let these men fuck her any way they wanted. Just as long as they filled that gaping hole deep inside her, the one she’d firmly sealed shut when she’d turned her back on Thane and her husband all those years ago. Desperation filled her and she grabbed his buttocks in an attempt to drive him in deeper.

Weston lifted his head, and gazed into her eyes in a connection as profound as any she’d known in her life. Then he smiled. “Naughty, naughty,” he murmured. “I don’t want to hurt you.” 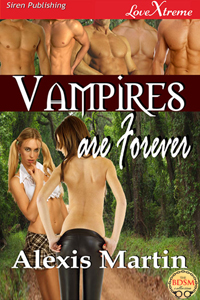 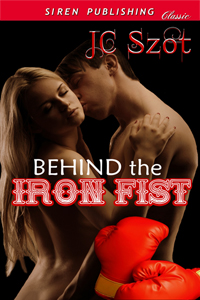