Are you sure you’re ready to see what’s inside?

S Club dancer and extrovert, Jay, has worked very hard for this eye-opening moment with his reluctant and shy friend, Kelley. Unfortunately, a humorous attempt to get her to open up serves to push her further away. Now it’s nearly impossible to convince her he’s not just out to play.

Hundreds of scars in need of hiding…

For good reason, Kelley has yet to let Jay see all of her, whereas he takes his clothes off nightly for a living. Her respect for him runs unmatched because she sees who he is inside. There’s just no way to ever reciprocate and that’s not fair to him. His interest in her has never made sense. The best option is convincing Jay there really is nothing to see.

One dark night to shine some light on their healing…

Sometimes, it just takes one very patient man, one dimly lit room and one safe set of arms. 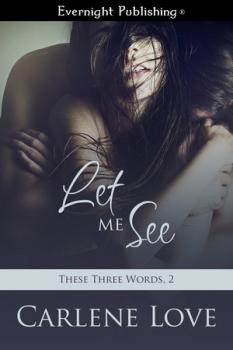 More From These Three Words

Kelley gave a full look around to her surroundings. Plenty of summer school students and faculty walked the middle school campus and enough cars drove by on the streets to make her feel safe-ish. Maybe that was what let her decide to finally look back at him because it sure as heck wasn’t that her heartbeat had calmed back down. No, that was still out of sorts.

She glanced his way and an immediate sense of calm washed over her.

He still had that same smile planted firmly, firmly on his, um, his very kind looking face. She noticed he had his hands placed together and positioned over his chin and lips like he was praying. For what? That she wasn’t about to scream bloody murder? She should.

Okay, and his beard wasn’t the scraggly unattractive type she’d thought he had a minute ago. Looking at it now and feeling slightly less frazzled, she noted it was blond so it had appeared thin and sparse. But it was nicer, on this second view.

Slowly, her gaze slid up from his chin to his lips where she became momentary goo. Sneaking in a breath through her teeth, she saw that his lips were pursed like he was holding some big secret inside them. Of course he would have the cutest lopsided smirk going on because apparently the man upstairs wanted Kelley’s run-in with this man to leave her tongue-tied. She’d paid attention to plenty of crush-worthy celebrities on screen over the years, but she’d never studied a man in this way. In person. So close. Kelley didn’t dare stop at his perfectly strong male nose. No, just a few more centimeters upward and she made it to the most intimidating, daunting set of eyes she’d ever seen.

Seriously, did he realize how intense his stare was?

Did he always intrude on people this way?

He looked like the typical guys Anyell had told her to stay away from with his clear love for athletic wear and fit build to go with it. But, there was just something about him that refused to let her be so judgmental as Anyell would have been. The longer she gazed back into his eyes, the bouncier her heart became. What in the world was the organ doing in her chest? It was like the thing wanted out of her body so it could see the dazzling blue depths for itself.

Without a second’s notice, she blurted out, “How old are you?”

“Oh, um, uh, yeah I’m 26,” he stuttered out and then his mouth naturally seemed to go back to that grin that had her blushing. One corner looked like it was really pulling.

Twenty-six. Why in the world did I just ask him that? Ugh.

For a moment in time, they returned to staring into each other’s eyes as she pondered certain things. It was then that she had her answer as to why she’d asked. With his hair pushed back from his face as if he’d let it dry that way after a shower, she could see the beginnings of lines and creases across his forehead and framing his eyes. He’d just told her he was 26 so he wasn’t at all old. This made Kelley instantly curious to know if the lines were from smiling all the time or because he’d had a hard life. Anyell’s eyes were actually the prettiest she’d ever seen and held something similar to this man’s. Her brother had lived both a life full of love and smiles and also hardships. Maybe this stranger had too. Who in the world knew why she’d become so fascinated with him so quickly. She watched as his arm muscles flexed with just a simple movement and how nice his tan complimented them.

“How about you?” he asked, and it was as if they’d met hours ago, not seconds. It was like her asking him had been the most normal thing in the world.

“How about me what?” she said in return, not meaning to frown but doing it anyway.

Grinning, he said, “How old are you? Wait, let me guess.”

They paused walking and then the most amazing thing happened. Okay, about five most amazing things. She may as well be an ice cream cone shivering like that, with the way he slowly looked her up and down from head to toe and back. Her second treat? He may have made an mmm noise. Might have. If not, she was making it part of the story anyway. But she was pretty sure he had. His fingers were no different than the rest of him because they reached out and touched her cheekbone without asking if it was okay. For the record, although it made no sense, it was okay. Four and five? His fingers rubbing across his own lips as he thought, and then, the wink. The wink! Who winked at her, ever? No one.

For a moment, she wondered if this was sheer desperation she was exhibiting. It didn’t feel very good, if she was being honest. Too desperate. Too needy. Hanging on this stranger’s every little notion the way she was? Probably not good.

But guess what? There was no helping it.

Nerves busted through the thin veil of coolness she had found and latched onto during his observation just now. “I’m twenty-two,” she practically squawked.

“That’s totally what I was going to guess,” he said, his voice leaving her completely undone. “Your skin is really nice. And pardon me for saying it, but you have a rocking body.”

Her brain, it was having a heart attack. A lump formed in her throat but didn’t stop her next words. “Your voice is like a cupcake that’s actually good for me.”

What in the world did I just say? I am such a dork!

“That is by far, the most freaking wonderful and fantastic thing anyone on this planet has ever said to me. But now you gotta tell me, what flavor?” His grin melted her worries away that she’d just gone complete freak show on him. He was totally okay with it? Maybe he really was a psychopath.

She began to shake her head no, trying to convey to him that she could no longer trust her mouth and the insane things that might fly out of it.

“Come on, pretty please?” he begged nicely. “Is it red velvet or birthday confetti?”

Oh boy. She thought about it, unbelieving she felt this comfortable around him so soon. Her eyelashes closed over her lids and when she opened them back up, she figured why not just say it. “Dark chocolate. Definitely.”

Those words made him smile so big. And the laughter that came pouring out of his mouth wasn’t the kind that others had done to her when they were poking fun and being mean. It was a joyous, hearty laughter, one she felt good about having caused. He ended the fit by giving her a very sly smile, like her answer had been seriously entertaining. If there was some secret, inside joke about dark chocolate, she wasn’t aware of it.

“That was a really odd thing for me to say, wasn’t it? I’m sorry. I have no idea where that even came from. I don’t get out much. I mean I do. I actually attend UNLV. You’d just never know it. I’ll be quiet now. I promise I’m not normally like this.”

“No, no. I love chocolate too. Chocolate is great. The darker the better. I think you’re adorable. You can just blame it on me. I have that effect on people sometimes. Plus, the way I just came up on you had to be startling. I just couldn’t help myself. I had to meet you.” He winked and smiled and then finished it off with another wonderful chuckle.

His reaction made her feel so good that she couldn’t help laughing herself for a second.

Kelley was so glad she happened to look at his face just then and catch his expression. She had no idea what had caused it, surely not her… It was so overwhelming that she had to look away and catch her breath for a moment.