Marshmallows and the Snow

Ruben, a young man from London, enjoys his first vacation with his first boyfriend in Norway. But soon, the ski-adventure turns into a nightmare. First, Ruben finds Toby fucking one of the hotel’s employees in their bed. Then, in his haste to flee the horrible situation, he becomes lost in the cold woods. And when he finally finds shelter in a remote cabin, the owner welcomes him with a raised shotgun.

Aleksander is stunned when the tiny guy he thought was a burglar faints right in front of him. To make it up to him, he peels the cute slip of a man out of his soggy, icy clothes and tucks him into bed. The meteorologist and self-declared hermit plans to get rid of his guest as soon as he wakes up. Ruben is less than thrilled though.

The blond, Nordic God might have a habit of swinging shotguns, hatchets, or axes, but he’s kind, caring and hot as hell, too. Ruben is instantly smitten and falls hard for the older man. He tries everything to seduce him and even considers to uproot his whole life in London for Aleks’ love. But Aleks has been burned in the past. Can he accept the love and future Ruben offers him, or will Ruben return to London for good?

Marshmallows and the Snow

Ruben was freezing. Really freezing. The only things surrounding him were trees and acres of snow-covered, fascinating, and picturesque landscape. Problem was Ruben wanted to spit on everything romantic. It wasn’t so much the cold or the wetness seeping through his shoes and turning his socks into squishy, icy lumps that had ruined Ruben for the beauty of his surroundings.

No. Finding your boyfriend fucking one of the hotel’s employees in your hotel room, while you were supposed to ski down the hills, did that to you. Everybody would’ve been a little unappreciative of the amazing Norwegian nature after such a run in, right?

His first fucking vacation with his first fucking boyfriend and now Ruben faced the possibility of having to spend another week with a lying, cheating prick. However, what should he do? Go home? No way! He’d longed to visit Norway for years. He’d collected every spare penny finally to be able to visit this country. He wouldn’t leave.

That Ruben wasn’t fond of sharing the room with Toby any longer presented the first problem. Second, he wasn’t confident enough to tell Toby to move out of their room and fetch another. Toby was some critical inches taller and broader than he was.

That put him in a tight place. Maybe he could ask at the reception if the hotel offered a solution for emergency breakups. The expensive hotel’s website promised service around the clock. Furthermore, they would do everything in their power to make this vacation the best of their guests’ life. Well... they could start with giving him a new room and moving his clothes to said new room, because he sure as hell wouldn’t go back into his old one to pack his stuff. Better yet, they could offer Toby a new room and move his shit—preferably through the window. After all, Toby had been the one cheating.

But first, he had to find his way back to the hotel. Enough with the lonesome, heartbroken wanderer persona. This behavior wouldn’t lead him anywhere. At least not where he should be. It was getting late and soon it’d be pitch dark and much colder.

Ruben stopped, stood, and surveyed his surroundings. But no matter which way he turned, everything looked the same. Shit. A worried shiver worked its way down Ruben’s back when he realized that he—in his haste to bring as much distance between him and Toby—had walked without keeping track of his direction. With the result that Ruben had no idea where the hell he was.

Don’t panic, Ruben. You can easily follow your footsteps in the snow to find your way back to the ski resort. No need to panic.

A quick look at his cell phone confirmed he’d strayed for roughly two hours. Crap. To top it off, he had no service, but who would he call anyway? Toby? Mountain search? Pfft.

Turned out, there was indeed need to panic. After a few minutes of following his footsteps, Ruben noticed the still falling snow and the wind were making it impossible to find his traces in the fluffy, cold stuff. Shit, shit, shit! Okay, now he was really nervous. The cold was dangerous. If he couldn’t find warm shelter for the night, he’d freeze to death in his wet clothes. And there were probably all kinds of animals lurking behind those trees.

Ruben felt slightly paranoid when he racked his brain for any information regarding wolves in Norway. Were there any? Thank God, he hadn’t traveled to America with Toby. They had mountain lions, bears and shit in the States. Oh, wait! What about bears in Norway?

A branch snapped somewhere behind him and Ruben let out a high and embarrassingly girly shriek. But hell, who cared? Not the bear probably ogling him from behind a tree and waiting for the best moment to strike. Maybe it was a dumb move, but Ruben turned and dashed through the snow. Despite his love for winter sports, he wasn’t the fittest guy on earth. After roughly two minutes of running through calf-high snow, he was wheezing akin to a ninety-year-old woman.

And he’d managed to lose track of his path even more. In his blind panic to escape wild, hungry animals, he’d run through the woods in a zigzag line. Oh damn, he was so fucked. This was entirely Toby’s fault! The prick hadn’t turned out to be the knight in shining armor Ruben had hoped for, at all.

He continued trotting through the snow because, really, what else could he do? Curling into a sobbing ball wasn’t an option although it sounded tempting. Instead, he treated himself to a short break under a sprawling tree to catch his breath and assess the situation.

He was a mess. A shivering, wet, frozen mess and he had no idea where the hotel was located and how to find the way back. Plus, he didn’t know where to search for shelter.

Maybe there was a cozy hut or a cabin somewhere around here. This wasn’t an area reserved for ski tourists, but for hunters. Hunters had hunters’ cabins, right? At least, in the movies and the romance novels Ruben loved to read they always had cabins. Romantic ones, made of wood, and with a hot fire burning in the fireplace. Oh and a hot, burly lumberjack who lounged on a fur in front of the fireplace, dressed in nothing but a checkered flannel shirt. 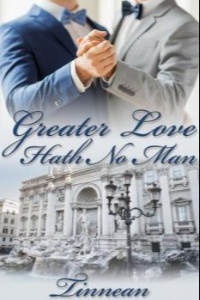 Shade of Blue
Liza Kay
In Shelf
$4.99
Tweets by
sirenbookstrand