When Firefighter Eric Freeman adopted the baby he rescued from a fire, he didn’t know he would lose his wife a year later. Charged with caring for his daughter, and grappling with the loss of his childhood sweetheart, Eric falls into a life with little happiness. As a widower, he adapts to the loneliness until he meets Reed Jennison in a counselling session. Can Eric let go of the memories, or will guilt demand he keep his wedding ring on?

Reed has just moved from the Motor City and is looking for a slower pace. Traverse City Michigan offers the perfect venue to settle down until she’s faced with a life altering decision after discovering her long-term boyfriend has been having an affair. Will Reed hand the pieces of her heart to Eric or will she give in to the sadness and leave the small town she’s grown to love? 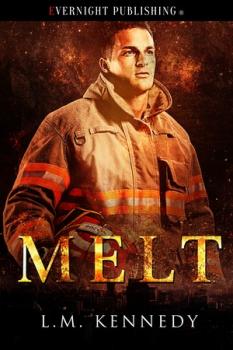 With the sound of my breath in my ear, and the crackling of the fire ripping into the frame of the house, we jogged in single file along the east side. Following an uneven stone path beside the two-story Victorian, framed on one side by ten-foot cedar shrubs, Chad used the Halligan to pry the crooked gate open. Most of the older homes on this street had smaller setback distances, some less than four feet apart. If the cedar hedge caught, the blaze could spread to the house next door, and possibly to the rest of the street.

Chad glanced up at the hedges as we jogged past, and bumped the icy fronds with his fist.

As we rounded the house, it was as though we’d stepped into another time, another world. The wind was carrying the smoke west, across the street, and the backyard grass, frozen under a thin layer of ice, glistened like a field of diamonds in the light of the moon, the night still and calm. A baby stroller sat abandoned on the stone patio, one of the wheels warped and damaged, and a man’s jean jacket, stiff with ice, lay forgotten across a wooden chair. Cigarette butts littered the patio, and a can intended to catch used filters was overflowing with burnt tips.

“Windows,” Chad yelled, his voice muffled through the face mask of the SCBA.

I nodded and scanned the back of the house.

Two windows on C exposure. One was a bedroom. The other was either another bedroom or bathroom. One window at level one. Could be the kitchen. No sign of flame or smoke on this side.

“Rescue one is at a door on C exposure,” Chad scanned the doorway as he talked into the radio. “Permission to enter. Over.”

“Copy that, rescue one. You are clear to enter. Maintain radio contact. Out.”

We crept to the door, sizing it up as we advanced, and Chad stood to the left of the handle. It was solid metal, the jam the same, with no windows we could use to gain entry. Using the flattened end of his bar, Chad shocked the door and it shuddered but held. Gesturing me forward, I placed my bar down and gripped my axe with two hands as I knelt on one knee, ready if he needed more force to pry the door open. He struck the door three more times before the jam loosened enough for him to wedge the hooked end of the Halligan in the space. There was no sign of flame or smoke from the quarter-inch gap, and his teeth clenched when he nodded at me.

“Hit,” he yelled, and I swung and struck the bar with the blunt end of the axe. My arms vibrated with the impact of metal on metal. “Hit,” he cried again, and my arms swelled as I hefted the axe over my shoulder and struck the Halligan on the blunt end. “Hit.” With this strike, the bar sank into the space and stuck. “Drive it!” I took a breath and swung four times without stopping until he yelled, “Stop!”

With one firm heave, the door swung open, the jam a battered mess, and only a trickle of smoke swirled over our heads and into the night sky.

Falling to his knees, Chad laid down on his stomach outside the door and used his flashlight to scan the darkened room beyond. He crawled into the house on his hands and knees and I followed. Blane and Mike stayed on the stone patio, ready to enter at the first sign of distress.

We shuffled into a kitchen, and a preliminary scan revealed the room clear of smoke. A flickering red line rimmed a door across the room, giving life to the fire raging beyond. The fire in the living room was well underway and would have spread to the kitchen if the doorway had been open. Despite this barrier, we had maybe less than two minutes to search the upper level for occupants and get them out safely.

After clearing the kitchen, Chad gestured to the stairwell to the right of the rear door and I followed as he crawled along the linoleum and up the wooden stairs. As we climbed, the sound of an approaching siren grew louder, and blue lights flashed on the wall of the tight stairwell. Chad paused at the top of the stairs, hand held up in a gesture to halt, and pointed to the area of his ear under his helmet.

I paused, body rigid and slick with sweat, when a sound sent a shiver of ice down my spine.