Is the devil capable of love?

Xavier doesn't do trust. He breaks. He kills. After living through hell, he's transformed himself into El Diablo, the baddest motherfucker around. His only weakness is the sister he lost as a child—the one Boss promises to help him locate. The only catch is he has to work for Killer of Kings and learn to play nice with the other hitmen. He does his job, determined to prove himself. Then she walks into his life, and nothing is ever the same.

Alesha hits the jackpot when she's hired as Xavier Moreno's house cleaner. She has her own private suite, and the wealthy businessman is rarely home. Things change in a heartbeat when he comes home drunk one night, covered in blood, and telling her stories about murder-for-hire and a secret group of assassins. He also reveals a side so broken that she can't help but fall for him. Can a killer fall in love with his cleaner, or will he add her to his hit list?

Alesha woke up with a start.

Blinking the sleep from her eyes, she frowned as she heard the noise again. Something was moving downstairs.

The sound of banging and glass breaking drew her out from the bed. Wearing a pair of pajamas, she was in no way suited to deal with a potential intruder. Xavier said she would be safe here. Grabbing the baseball bat that she took with her to every place she stayed, she opened her bedroom door.

This was the first time an intruder had invaded her home.

She only worked here. Just a housekeeper. The woman he kept to keep his life in line and perfectly neat. She cooked, cleaned, and ran the errands he asked for.

She was nothing more than a woman that blended into his life like a piece of furniture. Alesha was a couch.

Pain slashed through her at the thought of how little she meant to him. Not that she was supposed to mean anything to him. He was her boss. Nothing more, nothing less.

Getting to the stairs, she winced as they creaked beneath her weight.

When no one jumped out of her and she figured she was safe, she took the steps slowly, bracing herself against what she might face.

What if it was like out of a horror movie and they were wearing a scary mask and wielding a knife that would slash her into a thousand pieces? Or this was only a dream and she was about to be torn to bits by a man with knives for fingers? Note to self, never ever watch old seventies and eighties horror films before bed. She hated scary movies so much, but once they were playing, she needed to know what happened next.

Once she cleared the stairs, she squeezed the bat tighter.

She’d never been good at baseball.

Stepping down the hall, she walked into the dining room where she saw a large shadow. She screamed and swung the bat, hitting something. The intruder didn’t stop though. Lifting the bat, she drew it back about to hit him again when he caught the bat and pulled it from her grip.

Before she knew what was happening, the intruder tugged her into his arms, holding her still. She screamed and fought with all of her might, but whoever had her knew what they were doing.

He was so strong.

She was going to die.

She didn’t want to die.

There was still so much for her to do. Become a mother, a wife, know what really good sex was like.

“Will you fucking stop wriggling, woman? You’re going to hurt yourself or me or both of us.”

That was Xavier’s voice.

“That’s right. You’re hitting your fucking boss and all I was doing was grabbing a drink. If I let you go, promise you won’t try any of your deadly moves?”

She nodded. No longer struggling. There was no way she could use words right now.

What if she’d killed her boss? What if he sued her?

He paid her a good wage but not enough to take him on in court. Would she need a good lawyer? It would be bad enough losing this job.

Xavier flicked on the light.

She blinked a few times to get accustomed to the sudden brightness. When she did, she froze into place.

Xavier wore a white shirt and a pair of black pants. His feet were bare.

He held a bottle of whiskey in one hand.

He’d only been holding her with one arm?

The bat she’d been using for her attack lay on the ground at his feet.

“Fuck, is that how you greet every man that enters this house?” he asked.

She glanced down at her body and quickly crossed her arms over her chest.

“Nice tits. You don’t need to hide them. It’s not like I haven’t seen it all before. Believe me, there’s not much in this world I haven’t seen.”

His talk about her breasts was not what had her frozen in place.

The blood on his shirt was the reason. That and the scars she’d caught a glimpse of.

His back was to her right now as he poured some ice into a glass then added the whiskey.

Still rooted in place, she watched as he lifted the glass to his lips. “Want one?”

She shook her head. Words failed her. What was she to say?

Snarling at the Moon
Zenina Masters
In Shelf
$3.99 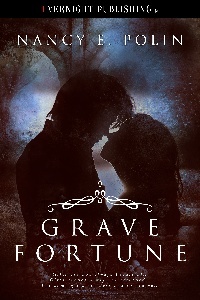