When Chase Harper and Trey Thomas opened their law firm, they never envisioned racketeering businessman, Markus Fitzgerald, being their client—or that Trey’s gambling addiction would land the firm in Fitzgerald’s debt. 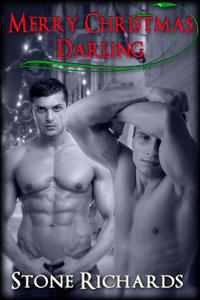 This must be the viewing room. Intrigued, he clasped his hands behind his back and stared at the men as they walked into the room and proceeded to line up as though they were presenting their wares. He stifled a chuckle and tried to make sense of it all. No wonder everything about the club seems so secretive. It’s a fucking whorehouse!

His gaze sought the first man at the end of the row. He was tall and very muscular, with long legs and big hands. His only piece of clothing consisted of a red thong and as Chase stared, he realized it barely covered his prick. Damn! Raising his gaze to his face, he noted he was staring at the floor, rather than making eye contact with him. Perhaps he wasn’t keen on servicing him that evening. His brows furrowed and he moved his gaze to the next in line.

Average height, the man had brown hair that waved slightly and touched his bare shoulders. His physique was equally attractive as the first man. His shoulders were well developed and his abdomen was ropy. A red thong covered his cock and he, too, failed to make eye contact.

His cock was pulsing against his fly as he moved his gaze along the row. The urge to fuck was quickly growing stronger but despite the tempting looks of the men, he wanted to spend the evening with someone who at least looked in his direction and showed a bit of interest in being with him. He wondered whether their salaries depended on how many clients they serviced in a night. Do they work on commission? A chuckle slipped from his throat, though he doubted any of the men were curious enough to glance his way.

“Mr. Fitzgerald has paid for your pleasure for the evening, Mr. Harper.”

Chase jerked his gaze around at the sound of the voice. The man who had showed him into the room stood just behind him, a smile on his beefy face.

“Take your time. You may choose any escort you desire. Would you like for them to turn around so you can see their backsides?” He chuckled. “Are you partial to hard buttocks? Or do you desire a long cock?”

Chase turned, directing his gaze back on the line of scantily clad men. Resuming his appraisal, he slid his gaze over the fourth man in line. He stood very straight with his hands clasped behind his back, almost defiant of being there. His chest bulged with muscles and a large tattoo of an eagle with wings spread decorated his skin. His jaw was set as though dreading being picked and his eyes stared straight ahead. He looks military. I sure as hell don’t want to spend the evening with him.

Moving his gaze along the line, he inspected the next man. A little shorter than the rest, he appeared a bit older. Dark hair was short cropped and his jaw was clean shaven. The thong covering his prick didn’t fit as tightly as the rest. Chase cocked an eyebrow. Well, he isn’t too well endowed.

As he moved his gaze alone the row, he was keenly aware that the man standing behind him was breathing heavily. He glanced in his direction and saw him ogling the man at the end of the row. He’s hornier than I am.

The second to last man in the line was slightly heavy, with rounded shoulders and beefy hands. Chase shuddered and stepped closer to the line so he could inspect the last man at the end. The guy didn’t seem the least bit interested in who was making a selection or trying to decide who he liked best. His head was bowed, and from first glance, his eyes appeared closed.

Chase cleared his throat, attempting to draw the man’s gaze. When that attempt to gather his attention failed, he walked toward the end of the line where he could get a good view of the man. 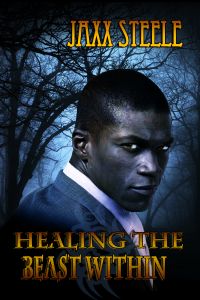 Healing the Beast Within
Jaxx Steele
In Shelf
$2.99 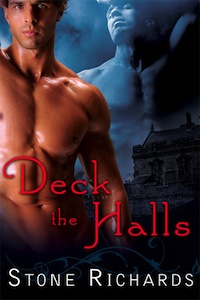