Nice Work If You Can Get It: M/M Romance

For any sort of a future together they both have to come clean.

Vinnie is a loser in love and in life – even with his good looks and hot body. He’s unable to keep a job for more than a few weeks and his love-life is in tatters. His friends see him as just another piece of ass and their idea of helping is to help him into their beds. Only his arch nemesis, Zeb, won’t indulge Vinnie’s pity party. So why does Vinnie feel a strange attraction to the only man who won’t indulge him – a man with secrets and a bad reputation? 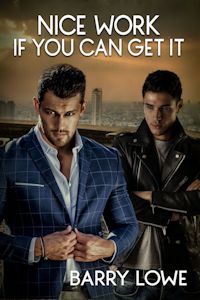 Nice Work If You Can Get It: M/M Romance

“I DON’T NEED your fuckin’ sympathy, I need your help.” Vinnie suddenly heard himself, loud, shrill, shouting like a banshee. Horrified, he lowered his head in embarrassment as his friends stared wide-eyed at his outburst. Vinnie was the last person to ever lose his temper. He knew he had to make amends. “Look, I’m sorry, but I just lost another job.” There were groans from around the table. This was the group’s weekly ritual: Friday night drinks at the Hammered & Tickle Bar to catch up on the week’s gossip. It was almost inevitable that, added to the salacious rumormongering that usually prevailed, Vinnie’s latest disaster would be a prime topic of conversation.

“I just couldn’t seem to get the bloody orders right. Caused a near riot at the café.” He smiled at the memory of the shemozzle he caused but then frowned at its aftermath. He got a right pasting from his boss and an immediate severance pay that would scarcely buy him a six-pack of baked beans to tide him over until he moved on to his next humiliation.

With luck it would be a matter of days before he found himself another position that was totally unsuited to his skills. The simple fact was – he had no skills. Zilch. Nada. Zero. Diddly squat. He was confident, but at the same time depressed, that his ability for rapid re-employment was based on his looks and his physique. He was blessed. Everyone kept telling him so. Unfortunately, with every new economic position, he was most likely to find himself in a new position sexually. Like, bent over a table in a restaurant, a dumper bin in a back alley, behind a bar, the boss’s office in a manual labor factory – you get the picture. So did the predators, but once Vinnie wriggled from their grasp it also meant the loss of another job as well as his self-respect. Not that he had that in great abundance. He wasn’t a prude – he loved sex – he just wasn’t very good at it. He was as inept in bed as he was in positions vacant. He wished he was better at both.

Vinnie was annoyed. “I don’t do it deliberately.”

“Of course you don’t, sweetie,” Maurie said, patting his arm. “You can’t help it if guys come on to you just because you’re gorgeous.” Vinnie bristled at being patronized. He detested sarcasm even more. Lenny, who had never been one of Vinnie’s biggest fans, snickered across the table. Their animosity grew in proportion to the number of times Lenny had unsuccessfully propositioned him, usually when he was pissed as a newt and all handsy so that Vinnie felt like he was being attacked by a tentacled creature from the Black Lagoon. Lenny was never going to take ‘no’ for an answer. The others at the table were a lot more subtle but he noticed how his drinks always tasted stronger in the alcohol department as the night wore on, how they all argued over who was going to drive him home (and not to Vinnie’s apartment if he knew anything about their devious plans for his body). Even the devoted couple, Glenn and Adrian, had suggested quite openly that he join them for a threesome.

It’s not that Vinnie was averse to most of the propositions – apart from the sleazy Lenny – it’s just, ewww, they were his friends. He just didn’t know how to be rude, how to turn down men who kept pestering him long after he’d told them to stop. In his innocence he thought telling them once was enough. But they took his quiet rejection as a “don’t stop”, as a signal he was flirting and wanted them to persist. He just wished he could let himself go. Get lost in the moment. Surrender to the warm exhilaration of sex. The only member of the group who seemed totally immune to what little charm he seemed to possess was the self-proclaimed kinky manslut, Zeb. They loathed each other. It had been mutual on their first meeting. They bickered and snarled and…

“If you’re so bloody useless why don’t you just stop faffing about and get down to that corner where all the twinks hang out. You can make good money on a busy night.” Zeb was totally not the caring type. He abhorred self-indulgence as much as he disliked Vinnie. It may have had something to do with the fact they were the two most attractive men in the circle of friends although Zeb was everything Vinnie wanted to be: confident, charismatic, sexually alluring, unafraid to grab life by the ass and fuck it into submission. He shuddered just thinking about being submissive to Zeb. Then he remembered the slur his nemesis had just muttered.

Vinnie raised his voice again. “Fuck you!” It felt good to use an obscenity every now and then although his face flushed at the naughtiness. He was such a loser.

“In your dreams, honey. You couldn’t cope. Besides, you’d keel over once you learned how kinky I am.”

The imputation of kink was a mystery that surrounded Zeb and he wore it like a cloak. It made him dangerous. Not one of his friends knew what his kink was although he alluded to it frequently, almost as if it were a badge of honor.

Vinnie was tired of the secrecy. He was tired of all the shit in his life and his temper got the better of him. Normally he was the mildest of people, this time he uncharacteristically struck out. “So what exactly is this kink of yours? Macramé? Golf? You kiss with your eyes closed?” 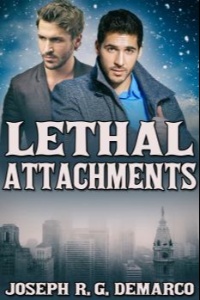