When his roommate brings home a lizard, Noah has no idea his life is about to change out of all recognition.

Uther is a shifter, a prince, and under a curse. Catapulted unexpectedly into the world of Fae and shifters, Noah must help Uther stay one step ahead of the witch who cursed him, as well as get him home in time to claim his crown.

Noah is also resisting a growing attraction for Uther. But Uther has other ideas, and when Noah's life is endangered he's prepared to do anything it takes to save his mate.

Punching his pillow for what felt like the millionth time, Noah flopped onto his back and stared up at the ceiling. Sleep wasn’t coming, and he decided he might as well make use of the time by getting a few more cakes baked. He could have them in the oven by the time he’d boiled a kettle and made tea and let them bake while he sat with the drink.

The plan held much more merit than lying in bed and staring at the ceiling did, which was the only alternative. Noah pulled on a T-shirt and headed downstairs. Rubbing his eyes, he headed toward the kitchen, almost on autopilot.

Then he stopped and stared and rubbed his eyes again. The same blue-haired stranger from two nights ago sat next to the fridge. Noah snatched up his rolling pin, which he always left on the counter, and adopted what he hoped looked like a fighting stance, the rolling pin raised.

The unknown man stared back at Noah, his cheeks bulging slightly from the cake he’d just stuffed unceremoniously inside his mouth as if trying to hide it.

Noah was stunned the man showed neither fear nor reaction to Noah standing there with a rolling pin at the ready. “James get in here. We’ve got an intruder. Hurry!” Noah shouted, keeping his makeshift weapon poised.

The stranger looked away, his gaze darting back to the fridge as if deciding what to steal next.

“Don’t even think about it.” Noah dropped his voice to a warning growl.

“What intruder? Oh fuck. Why didn’t Aunt Tawny tell me she was giving me a shifter?”

“Need-to-know basis.” The words were garbled but recognizable as the stranger tried to swallow the last of the cake.

“Hey. He’s nearly naked. And what do you mean, shifter?” Noah looked from the man sitting on the floor to his roommate as if they were in collusion. Then it struck him. “Shifter? He’s that… lizard?” Images of him pottering around naked while preparing food when James was out for the night made his cheeks burn with embarrassment.

The stranger snickered as if knowing exactly what was going through Noah’s mind. “Nicely hung. For a human.” 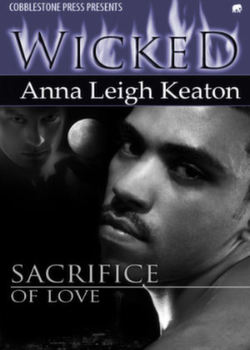