MacIntosh ‘Tosh’ Tanner has had the worst year of his life with the cancellation of his TV series, Cowboy County, and a former business manager stealing his money. And now his boyfriend has dumped him, too. He fears for his future until he receives an unexpected surprise. He’s inherited a massive, run-down ranch in Dripping Springs, Texas, from a fan. It’s worth over a million bucks. Discovering he shares this bizarre estate with another beneficiary, he wonders who it could be. Anyone would be great as long as it’s not his archenemy, Dagan Rucker.

Dagan, Tosh’s former co-star, was also swindled by the same business manager, but over his lengthy career, he invested in a lot of property. Settled in Topanga, the real cowboy heart of LA, he bought the area’s first-ever working ranch and turned it into a bed-and-breakfast. He’s happy with his life, but lonely, and thinks about Tosh often, ever since they shared a scorching encounter five years ago. He’s tried for so long to work things out with Tosh, who refuses to even consider the possibility of them being together.

“I never thought I’d get my hands on you.”

The other man grunted as he leaned into him, pressing Tosh against the side of his SUV. He gave Tosh another kiss. “Wait till we get rolling around on the back seat.”

Tosh laughed, cupping the extraordinary, handsome face he’d never dreamed in his life that he’d get to touch. “Not the most comfortable place, but convenient, no?”

“Oh, no. It’s super comfy. But I always believed in show don’t tell.” He straightened, aimed his remote at the vehicle and popped the locks, with Tosh still glued to his mouth in a succulent kiss.

I’m with Dagan Rucker. Me! A stupid, dumbass guy from Montana! And he wants me! Tosh tried to slide his arms around Dagan’s neck as the celebrated movie star pulled Tosh closer, hugging him hard, then opening the rear door. They parted briefly for Dagan to throw everything on the back seat onto the floor.

With a look that made Tosh’s cock leap inside his tight jeans, Dagan pushed him onto the luxurious leather seat. Just as he prepared to climb on top of Tosh, a cracking sound invaded their world. Something was sniffing around the brush where they’d parked on top of a ridge in the Santa Monica Mountains.

“What is it?” Tosh asked, fearing it might be some deranged paparazzo.

“I dunno. It’s black. It’s either a wildcat or a skunk.” Tosh looked over his shoulder but gave up scrutiny as Tosh grabbed his shirt collar and hauled him into the vehicle.

Dagan laughed, reached behind him, and obeyed. The seat was comfy, but they were both wearing boots. And they were a bit sunburned. Dagan looked down at him in the deepening night. Whatever was outside, broke twigs. It somehow enhanced the moment. He was kissing a genuine movie cowboy! 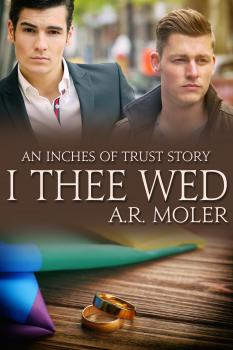 A Misunderstanding (MM)
Casper Graham
In Shelf
$3.99
Tweets by
sirenbookstrand