When savvy gossip vlogger Morgan Sidney gets assigned the breakup of porn’s most illustrious couple, she strikes a deal with her boss—if she scores an exclusive, she’ll get promoted. So when the famous and flirtatious Prince of Sin offers to fulfill her three wildest sex fantasies, Morgan must decide whether she’ll keep things professional or surrender and explore her sensual side.

As someone who despises the media, why is Chase Prince spending time with a reporter? Clearly, he’s intrigued. But can a scorched sinner—and the biggest smut star around—let a fierce civilian enter his domain? 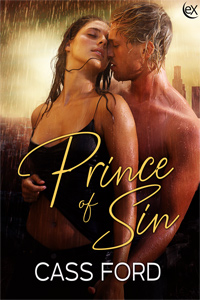 Seated at her staff desk, Morgan Sidney watched this randy round of cop and robber unfurl. Scanning smut at the office was not exactly peculiar, since any subject was fair game at leading Hollywood gossip website, Slander.

Peeking over her shoulders, she shifted uncomfortably in a squeaky swivel chair. It might have been research, but she didn’t want the entire Slander payroll to catch her in action. After repositioning her headphones, she lowered the volume and glowered at the screen. Attempting to focus, she wondered how people got off to such cheap erotica.

When Officer Prince smacked Tori with his ornate black scepter, then called her a whore, Morgan attempted a deep breath. But air caught like varnish inside her throat, blocking her lungs. She panicked, panting and heaving for oxygen.

Morgan remained still until Sean squeezed her shoulders. “Chillax, sweetums,” he whispered. “We know you were”—he paused to insert air quotes—“researching.” His yodeler’s cackle echoed, and he tugged her hair lightly, adding, “Nice pants. Bringing back the 90’s?”

Scratching her awkward oversized pants, Morgan followed Sean toward the conference room. She generally donned leggings, comfy sweaters and ballet flats, but today the twenty-six-year-old looked fresh out of a fashion feature. Instead of its usual wild beachy waves, her thick, mid-length, chestnut-brown hair was ironed straight and pulled back tightly. Her coffee-brown eyes popped, enhanced with eye makeup she mainly reserved for work events or occasional club nights. Foundation and bronzer blanketed her face, covering cute California nose freckles, plus blush, which she hadn’t worn since her sister’s wedding two years prior. Sporting vintage pumps, Morgan stood four inches taller than her five-feet-six inches. Wobbling, she tiptoed into the conference room to take a seat.

Slander headquarters sat fifteen stories high in the middle of Los Angeles, though Jason would have preferred fifty-five stories higher and in Manhattan. After joining Slander as editor-in-chief three years earlier, he’d moved its beachside office to Century City, one of LA’s most prominent business hubs. He expected employees to mimic his faux-New York City vibe, but no one measured up to his tailored-blazer-silk-pocket-square expectations. At least his subordinates had retired their flip flops.

Like every morning meeting, Jason stood beside his seat, declaring things and scribbling notes on a marker board wall. A high-end two-button jacket matched his short steely hair and darting blue-gray eyes. To exude a daunting image, standing only five-feet-eight inches, he leased customized sportscars while barely supporting two ex-wives. Adding to his identity crisis, an intern had recently labelled him middle age. Still, Jason held all the power at Slander, including the ability to promote vloggers like Morgan to a coveted producer title.

This was clearly news to nobody. “So, zero updates,” Jason said.

One month earlier, a colossal shakeup had stunned the court of Silicon Valley. Princess Tori Jade had kicked her man of three years to the curb, trading up for a greater crown by eloping with a woman, Viola Emperor, self-proclaimed Emperor of the Dykes.

“Perhaps Morgan has the four-one-one,” Marcus said, lifting his brows smugly. “After all, she just watched one of their scenes.”

She sprang to stand, nearly falling over. “No, I’m covering Fashion Week.”

“Anyone can cover buttons and frills, Sidney. I have to use my resources where they shine, and you’re clearly familiar with this breakup.”

“You said I could move off celebrities.”

Through gritted teeth, she continued, “And you said, Marcus covers film festivals. So we agreed on Fashion Week.”