Roses For My Lady

Intense, scholarly, big sister Meredith Ward is happy to see her little sister off to a country party until she discovers a Valentine card outlining plans for an elopement between her sister and the brother of an aristocrat. She leaves her cottage to halt their plans only to run into trouble herself.

Baron Gavin Sinclair learns late one evening about his brother's plans to wed a most undesirable young woman. His attempt to stop that union puts Meredith in his arms. Thinking she is the bride-to-be, he holds her hostage never realizing it will be his heart he loses. 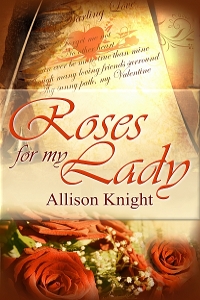 Roses For My Lady

Something pulled her from her dreams and she dragged herself into a sitting position. A dull ache behind her eyes brought her awake and she gazed about her. Bright, crisp sunlight shone through the windows. Strange, this wasn’t her room or her bed. And why did every bone in her body ache as if she had a fever?

“Well, you have finally decided to awake.”

She dove under the covers. Fear raced through her. A man was in this room.

She turned toward the voice; something about it sounded familiar.

Stunned, she froze. The events of the past night slammed through her and she stared at Gavin Sinclair, Baron Dunleigh.

What had she expected? Not the man standing in the open door. This man quite took her breath away. Never had she seen such a handsome man. He was tall, much taller than the few men she met, perhaps a good three inches above her father’s six foot.

He had the darkest blue eyes she had ever seen, and brown, arched brows were raised in question. His head was covered with a thatch of dark curls. But that voice caused her the oddest sensation as it rumbled through her. She felt hot, then cold as goose bumps crept over her skin.

“How are you feeling this morning?” he asked.

She moved her head and tried not to wince.

“It still hurts a bit, but my headache’s not a real problem. I do have a large knot that’s sore to the touch. I’m feeling well enough considering the tumble I took.”

She shut her mouth in dismay when she realized she was blabbering. Never did she chatter like that, certainly not around strangers and Dunleigh was definitely a stranger. Had the bump on her head scrambled her brains? Or was the appearance of this man somehow affecting her head?

What a ridiculous thought. No man made this strong an impression on her. Dunleigh wasn’t different than other men, surely.

“I’m glad to hear that, although I imagine you’ll be sore for several days.” He nodded and started for the door. “I’ll send Mrs. Perry up with a tray and if you feel like it, I’ll have water heated for a bath.”

She cleared her throat. “Really, you don’t need to go to any trouble. I would like to go home now.”

He gave her the oddest look and shook his head. “I think not. Bed rest is what you need, at least for today.”

She started to shake her head, but the pain she’d experienced when she awoke suddenly became more intense. She sank into the pillow, holding perfectly still, willing the ache away. Maybe after she had a bit to eat she would feel more like herself. One thing she did know. She didn’t like the sensations he caused in her and she needed to get away from this place—the sooner the better.