Brenda has been through enough relationship drama. After her husband was caught cheating at their wedding, she decides it's time to start over.

Part of her fresh start comes in the form of ranch hand Billy Joe Watkins. Brenda's taken with his gentlemanly, handsome ways. When she meets his good friend and fellow ranch hand, Salvador Rivas, the next day, sparks fly with his overly seductive nature.

Both admit to being ladies men, but claim their attraction and feelings for Brenda are sincere. They say they will do whatever it takes to prove to her they're in it for the long haul. Can Billy and Sal be trusted? More importantly, can Brenda learn to love again so quickly and easily? 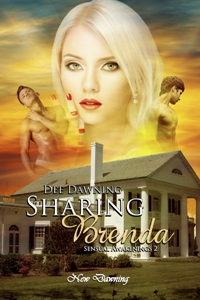 There are some pleasant twists and turns along the way that the reader doesn't know what Jaz has up her sleeve next. With some surprises and anticipations, Dee Dawning awakens the senses and breathes life into the pages. She makes Jaz real by placing her in a situation where the players must make decisions, while following their heart. 5 Angels

From Brenda Talley, The Romance Studio

The sensuality was explicit but, while a big part of the book, did not come across as nothing but sex. The ménage was uninhibited. The ending was totally unexpected. I highly recommend this book for anyone who enjoys M/F/M. The fact that there was such a strong storyline assured me that the book would be remembered. 5 Hearts

"Jasmine's Urban Cowboys is a wild read. Not sure what to expect? It will catch and keep you involved from start to finish. Beautifully written and artfully done, Dee Dawning has drawn you into her world in a glorious way. Well worth the time to read, Jasmine's Urban Cowboys will have you hoping for a couple of cowboys of your own." 4.5 Stars

"Ms. Dawning will win over many readers with her upcoming new series, Sensual Awakenings...Jasmine's Urban Cowboys is off to an amazing start. I have to say that Jasmine's Urban Cowboys is one hell of a sexy ménage ride involving Ted, Jaz and Gabe. Ms. Dawning's lead characters have lots of sexy fun in the beginning then slowly manages to seduce readers too. 4.5 Stars

"Now where were these guys when I was running loose? I smiled a lot when trying to decide which of them she'd pick (or myself, actually). I think all women would love to be in the position of being in these positions-heh heh...the humor and wit Ms. Ashton sprinkled with model dexterity throughout, plus the sex, which made me sweat, made for an overall, enjoyable read."

At four-thirty, they jumped into the ranch’s pick-up and headed into town. When Billy hit the main highway through Lewisville, Sal turned in his seat. “Brenda, my love, Billy explained to me about your special circumstance, and though what happened may have made you very sad, it made me very happy.”

Billy pounded the steering wheel. “Damn, I’m going to have to stop hanging with you. Every time you open your mouth, you stick your foot in it.”

“But why, you should be happy too? If she were happily married, would we be able to take this captivating woman dancing? Would we have the chance to hold her, to kiss her to make beautiful love to her?”

“No, but I made a commitment to Brenda. I will not push myself on her. It needs to be her choice if she wants to take our relationship to the next level.”

Brenda smiled. She got a kick out of their bantering. “That’s true Sal.You are an obvious tomcat, and I need stability.”

Sal turned more toward her and gazed directly at her. “Oh, but my sweet, let me explain. Though it is true I play around, I know when to be serious. With you, I could be serious. I will make the same commitment as Billy.”

“All right, you’re both in such a gentlemanly mood. This girl needs an escort to the Circle G shindig this coming Saturday.”

Simultaneously, they offered, “I’ll take you.”

She laughed. “Actually, I was thinking of both of you.” * * * * Tee Bones turned out as pictured, a large cowboy saloon and steakhouse with a hardwood dance floor and a raised band platform. They arrived around five o’clock and seated themselves in a booth convenient to the dance floor.

The air-conditioning, which had been set low, caused the outline of her chilled nipples to show through the fabric of her red halter. She retired to the restroom with her carry-all bag and exchanged her scanty outfit for a fully decked out cowgirl. After they’d eaten a decent steak dinner, Sal ordered a round of drinks.

As the night wore on, Billy and Sal bought her drinks, while flattering and charming her with stories and witticisms. They danced individually at first, and as the night wore on all together. They kissed, fondled, and petted her, hunger winning the battle over the reluctance in her mind. To her shame, she wanted both of these men. Is this how Jasmine felt that first night?

Lights were low and smoke wafted through the air, creating a nebulous haze. Their feet barely moved on the dance floor, swaying back and forth, body parts rubbing to the beat of Gretchen Wilson’s Heaven Help Me.

Sal stood behind her grinding his rigid manhood into the sway of her back, his lips sending shivers through her, leaving damp kisses on her neck and his hands surrounding each breast. If that wasn’t bad enough, Billy’s tongue was buried in her mouth while his hands roved her body. It was like they were a ham on rye sandwich and she was the meat. She was in a fog of desire, and when Billy’s hand went to her crotch and his middle finger slipped between her legs, rubbing her clit through the fabric, she was practically theirs for the taking.

But what about their commitment?

“Enough!” She shouted as she finally located her resolve. “You both promised not to come on to me unless I wanted it.”

“But, my sweetheart, don’t you want it?” Sal whispered in her ear.

Billy whispered in her other ear. “Then pick one of us, baby.”

She thought about that. Could I pick one? The truth is they’re too hot to discard one. It would be like having two aces in a poker hand and throwing one away. “I will not! It’s too soon and I just met both of you. I’m so confused.” She stormed off the dance floor. Everyone watched her return to the booth, then turned and watched two hot men in hot pursuit. 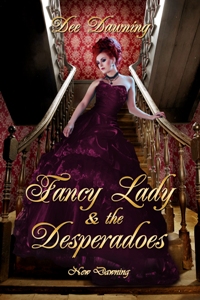