Since her mother’s death three years ago, Jenny Bradley has worked tirelessly to help her father run their business, Wesley Waterparks. Her father William plans to expand overseas, thanks to a sexy new client who Jenny finds more than distracting.

Sheikh Ari plans to expand an old water park in his home city of Dubai and make it the largest in the world. One look at Jenny, and his dream quickly shifts to thoughts of her. Despite Jenny’s lack of design experience, Ari insists she accompany him on the project or he will take his business elsewhere.

When Jenny tells her father she shouldn’t go, William confesses a secret. The family business will collapse without the sheikh’s funding.

Furious at her father’s irresponsibility, Jenny travels to Dubai out of a sense of duty to the preservation of her own dream, a water park to fund cancer research dedicated to the memory of her late mother. What she doesn’t expect are the feelings she develops for the kind sheikh, who appears to have everything but business on his mind. Will Jenny save Wesley Waterparks, and will she and the sheikh turn their dreams into reality? 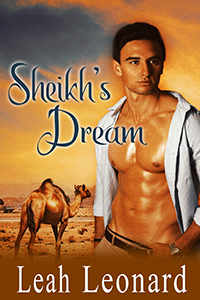 Jennifer Wesley, or Jenny, as her family called her, stared out the window at the vast sea of swimming pools surrounding the gigantic office tower where she worked.

Her father had called everyone in the entire company in for a special meeting. Their family-run business based in Orlando, Florida, had attracted a new high-profile client who would presumably take things to the next level, a dream Jenny’s father had since opening the business twenty years earlier.

The family designed water parks, and big ones at that. Nobody knew the business better than William Wesley. He’d been making dreams come true for thousands of people all over the United States. His were the most advanced water parks in existence, thanks to his incredible hydro-electrical power system which prevented water waste by keeping the water from evaporating too quickly into the atmosphere.

Jenny had been around the water park business her whole life. Since childhood she’d lived twenty-four seven inside amusement parks, floating and splashing around in swimming pools and basking in the glorious Florida sunshine. Over the years her father had shown her the ropes. The family business was her part-time job in high school, and now that she was recently graduated from college, her father had expanded her knowledge with the daily operations of the company and prepared her for this morning, when he would expect her to assist with their new client.

William Wesley wore a bright yellow shirt with starched slacks. He clasped his hands together and beamed at the twenty-five employees who gathered around a long, oval conference table. “Thank you for coming.”

Nobody but Jenny knew what her father was about to announce. She hoped the team would be more excited than she had been when she’d heard the news.

“All of you know how hard we’ve all worked to make a name for ourselves in the water park industry,” her father began. “Today I called you all here to announce that Wesley Waterparks is finally about to expand overseas for the first time in over twenty years.”

Jenny stared at the team, hoping they would take the expansion as positive news, the culmination of her father’s dream, not simply as a means to increase the bottom line. Jenny knew how hard her father worked for this, but she also remembered her mother’s wishes to keep the business local and do the best they could close to home.

“We have been charged to develop a new water park in Dubai.” He paused.

Gasps and whispers erupted in the otherwise silent room. Once the group calmed down, her father continued. “Of course part of the reason we were able to attract this business is because of each and every one of you. Our new system is quite attractive to people living in the desert where water is such a precious resource.”

Speaking of attractive, Jenny couldn’t help but notice the gorgeous man with jet black hair who stepped out of her father’s office. His tall thin frame was perfectly formed in a designer suit. Jenny studied every inch of the man, right down to his brown, polished shoes. Her mouth watered. Literally. She couldn’t recall a time when that had ever happened before, and it wasn’t the open box of glazed donuts on the end of the table tempting her taste buds, either. God was he sexy!

“One of you will be assigned to be project manager. Because of your unwavering commitment and talent, I am finally able to show you off as the best team in the world.”

Once again her father used the power of persuasion to captivate his team and ensure their loyalty to him. “So with that all said, I have someone I would like to introduce.” William turned and glanced over his shoulder at the handsome stranger. “Sheikh Ari.”

“Team, is this the way you welcome our visitor?”

The encouragement caused the staff to clap louder.

Mr. Wesley nodded approvingly. “That’s more like it. The sheikh would like to say a few words. Mr. Ari, please.”

The sheikh stepped into her father’s place at the head of the conference table. “I have engaged Wesley Waterparks to develop the largest water park in my beautiful city of Dubai.”

A team member raised his hand. “When?”

“We will open in three weeks’ time.”

Jenny hated to be rude, but this was the first she’d heard of such a ludicrous plan and she couldn’t help asking, “How?”

The sheikh turned toward her and stared.

His deep black eyes sent shivers through her. She gulped and wished she’d kept her mouth shut because now, rather than her initial concern over how such a mighty feat could be accomplished, she had to worry about the fact that this man caused her hands to tremble and her heart to pound. She hoped he didn’t notice.

Her father chuckled nervously and stepped in to answer before the sheikh could say a word. “Anything is possible when you have the best team in the world working for you.”

“We are expanding an existing park.” The sheikh never took his gaze from hers.

“I see.” Jenny’s mouth felt dry, and she glanced at the carpet so as not to betray her attraction to this gorgeous stranger. She didn’t want to embarrass herself or her father, who would likely talk to her later about her rude behavior.

“What kind of expansion?” someone in the far corner asked.

“Tripling the size of the current facility,” the sheikh explained. “I bought this park, recognized the potential in the location, and learned of your firm. I had been led to believe you are the best in the world.” He glanced at Jenny’s father.

“He is,” she said, jumping to her father’s defense. “Without a doubt.”