Gem has kept her parent's home fire burning for many years. Now she is old enough to pick a mate and the man she has chosen, Og, is too busy. She has done everything she can think of to entice him to her sleeping pallet, but he continues to be too busy.

What Gem doesn't know is Og wants to mate with her and has been hunting for the best skins to offer to her father. Gem's father, Tog, is greedy and wants only the best skins before he will give his daughter away.

Tog drags her to a different cave hoping to sell her there, but the man who offers for Gem is a poor hunter and Tog is offended when the skins he shows are tattered and torn.

Will the skins Og presents to Tog be perfect enough to please the old man?

Will Og always be too busy for Gem or will Gem win out in the end? 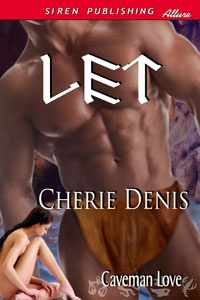 Hours later, they sat side by side at the edge of the hot pool. Close enough their bodies warmed one another in the cool night air, but not so close that they touched. Too exhausted to move, covered in blood and filth, Gem couldn’t wait to ease into the soothing waters of the heated pool. Would Og join her? He’d spent the whole evening trying not to stare at her titties and had done a poor job of it.

Gem had to smile when she thought about his long, hard cock peeking from under his work apron, making it clear he hungered for her. More than once, she’d noticed a drop of man-juice on his tip. His cock’s protective hood was nowhere in sight, the dark knob fully exposed. Yes, he hungered for her as she hungered for him tonight.

Gem had gone out of her way to rub her nipples against his arm or back more than once. Each time, his cock had grown longer and firmer. She’d also made sure to spread her thighs, giving him a good, clear view of her cunt and the honey which trickled hotly from her.

He had to be the cave’s idiot not to have noticed how much she wanted him.

“We should clean our bodies.”

Gem stood, untied her work apron, and let it drop to the cold, hard ground. “I do not think so.”

Og lifted his gaze and stared openly at her in the light of the moon. The night air was chill, but she was hot inside. She laughed softly when he swallowed. “You are not busy, Og.”

His eyes never strayed from the curls protecting her cunt. Feeling confident, Gem shifted and parted her legs, widening her stance.

Og stood as though in a trance and unfastened his work apron. It dropped to the ground with a loud thump. His massive cock sprang into view.

Gem nearly sobbed with longing. Instead, she managed to stammer, “O–Og?”

He gave her a knowing look and nodded. “Yes?”

He laughed and touched himself instead, lifting and cupping his cock and balls before letting them free. They bobbed and rolled against his thighs. His cock pointed straight at her.

His boy-child grin told Gem he was teasing, so she stuck out a trembling hand and touched the very tip of his exposed cock. A pearly drop of his seed appeared, and Gem licked her lips. “I will taste you now,” she said. She was not asking permission.

His hips bucked as though something had hit him from behind. “I think I am busy.”

Gem stamped her foot. “You are not.”

Og cupped his cock and balls, offering them up to her like a gift to the gods. “I am busy, girl.”

Gem’s heart tipped, and her eyes filled with tears. He didn’t want her.

“I am busy with you,” Og continued in his deep, rough voice, sending her heart spiraling out of control.

“Oh!” She was so excited and happy she could barely breathe.

Og moved a step closer and she, suddenly unsure what to do, took a step backward. Her foot slipped on the wet rocks, and she threw her hands up in surprise. Before she could stop, she fell, landing in the pond with a great splash, and sank like a stone to the bottom.

Gem wanted to die. How could this have happened right in front of Og? Right before she got to taste his beautiful cock? He would probably leave her now since she’d made a fool of herself.

Kicking hard, she rose to the surface and came face to face with her almost-lover. When had he slid into the water? Before she could protest, she was in his arms and he was nuzzling her neck.

He gently turned her and slid his strong arms around her ribcage. Her back was against the solid wall of his chest, his cock long and hard between her bottom and his hips. The warm water surrounded them like an extra embrace while mist rose from the surface, hiding them in their own little world.

The touch of his heated cock against her skin turned her legs soft and wobbly as a toddling baby. She was weaker than a newborn tiger cub.

She whimpered when his hands cupped her titties. His fingers pinched and tweaked at her nipples until she was writhing and crying his name. He nipped at her tender neck, sucking and licking.

Eager to give him everything, Gem turned in his arms and arched her back, bringing her nipples close to his mouth. Og took advantage of the shift of her position to dip his head and begin sucking.

“Ahhh,” she moaned, throwing her head back. Her moan echoed through the valley, ricocheting off the rocks surrounding them. “More, Og, more. Do it harder. Suck harder. Oh, it feels so good.”

Og lifted his mouth from her nipple and whispered harshly, “Silent. No one must hear us.”

Gem clamped her lips tightly together and pulled his head back toward her titties. “More.”

He eagerly latched on to a nipple, sucking it into his heated, wet mouth. He twirled his tongue around her nipple, and Gem bit the inside of her mouth so she wouldn’t scream.

Og lifted his head again. “Put your legs around me, girl.”

Gem wrapped her legs around his body and rocked her cunt against his belly. His rampant cock nudged her bottom, seeking entry to her open cunt. Gem rocked against him, moaning like a wounded animal. She had waited so long to touch and be touched by him. She was frantic with need. Her wet body slipped closer to his cock. The tip touched the edges of her cunt, and she began to whimper softly.

Gem pushed against Og’s broad, lightly furred shoulders. “Put me down. My father is calling me. He will find us soon.”

“So?” Og laughed quietly and nuzzled her swollen nipple. “What does it matter?”

“He will be very angry. He is saving me for the highest offer.”

“I will take you now. You are mine, Gem.” Og wasn’t to be deterred. His cock was sweeping between the cheeks of her bottom and would soon gain entry to her cunt. The water lapped at her body, spreading its warmth to her insides. She was ready for Og to put his cock into her. So ready, her whole body trembled in his arms. All the advice Cia had given her about what men and women could do together besides put his cock inside her made her head spin. She wanted him.