Adultery, divorce, murder . . . why did Deecey Hannaford let her twin brother, Ace, embroil her yet again in his off-again/on-again private investigator business? As an aspiring actress, she couldn't keep placing herself at risk in his ridiculous capers.

Their father, a Florida state senator, was driving them both nuts . . . Ace trying to win his approval, Deecey trying to break away from his manipulative tactics.

Yet Deecey once again succumbs to Ace's pleas to help with a casecomplete with gypsies! Will this be the case that puts both her and Ace's lives at risk? 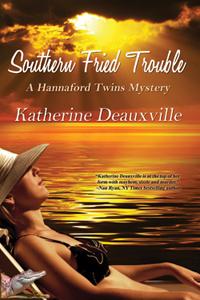 "These siblings are a modern-day Nick and Nora Charles! It's great fun!"

"A terrific read, it kept me on the edge of my chair and laughing at the same time."

"Maggie Davis (Katherine Deauxville) is at the top of her form with mayhem, sizzle and murder."

"A bright, quirky, enchanting story that kept me surprised and turning pages. One of the best I have read all year."

Deecey concentrated on the only section in the Neptune Club chain link that didn't have three strands of barbed wire at the top, at the same time juggling a beach bag containing the camera. The only help Ace had contributed so far was his hand on her leg to steady her.

Now Deecey could see the Neptune Club was virtually deserted. Instead of club patrons frolicking in the Olympic-sized pool, the only sound was a squeaky bossa nova coming from loudspeakers hidden in the flower-studded shrubbery.

As she dropped to the far side Ace whispered, "Take care of the camera. I haven't finished paying for it yet."

That particular section of the fence was the only part that offered a way into the club other than the front entrance. Ace had scouted the area twice that week, hitching a ride on the bread truck.

He watched as she lowered herself until her feet touched the pavement. Ace could melt eighty year-old half-blind widows with that look; he was truly beautiful if you didn't mind using the word beautiful for a medium tall, curly-headed male with an incomparable body. Ace's looks caused no end of trouble; Deecey could testify to that.

She turned away, determined not to hear him. Deecey was jumpy, too. After all, she was only the amateur; he was the real private eye.

It took only a second to cross the concrete and slip into the concealing shade of the kitchen building. Pressed against the wall, she could hear, over the roar of the air-conditioning unit, voices that indicated the kitchen staff was at work inside.

At that moment she was reminded that she could get arrested for trespassing on private property and posing as a burglar in a thong bikini whose individual parts were each about the size of a Florida lottery ticket. Not to mention the camera, like a time bomb, in the drawstring bag. In a place like the Neptune Club, cameras were the last thing the fun-loving clientele wanted to have around.

She started down the flagstone path, swinging the beach bag from one hand, trying to look as though she belonged there.

It had been plain from the beginning that Ace couldn't carry off the Neptune job alone. Any male found on club premises was liable to be challenged by club security and asked for his membership card. Considering what went on inside the place, that was only to be expected.

Three on the Prowl (MFM)
Tara S. Nichols
In Shelf
$1.50
Tweets by
sirenbookstrand