Finding your first one night stand at your sister's wedding would unnerve anyone. Trisha stood before the man she'd once given herself to freely years before. She felt her cheeks heat at the thought of how she allowed him to love her so unconventionally, accepting his hand and asking for more.

Charlie enjoyed his life filled with travel, new projects and always a predetermined time frame. His best friend's wedding should have been a quick side trip, but his introduction to the bride's sister changed the dynamic. The instant attraction they felt for each other was still static in the air around them.

4 CHERRIES: "Ms. Payne writes a novella filled with passion and tension. Her characters have a past they felt was in the past, yet they can't stay away from each other. I liked that they used false names during the initial tryst and that it was back story, but it worked that way. Trish, for 1958, is very independent. I liked that. She didn't lean on Charlie or expect him to solve her problems. More women nowadays need to learn that lesson. I liked that she was able to walk away. Yes, it hurt, but she did what she needed to in order to survive. I liked that Charlie wasn't a typical ride in on a white horse and save the day kind of hero. He had his issues and had to deal with them. I also liked that he didn't push her to do as he pleased, but allowed her to have control. Many men need to try that more often. Though the love scenes were hot, you felt a certain distance. As much as they wanted to be together, the differences in what Trish wanted and what Charlie needed kept them at arm's length, but also brought them together. They understood each other. If you want a sexy read for a cool summer night, then you want to pick up a copy of Magnificent Abandon. Well done." -- Tiger Lily, Whipped Cream Reviews

4 BLUE RIBBONS: "Magnificent Abandon was a pretty entertaining read, simply because it addresses a question that is relevant even now. The interaction between Charlie and Trisha was pretty humorous, especially when they were trying to work through their issues, and trying to deal with their feelings...All in all, Ms. Payne did a very good job!" -- Noelle, Romance Junkies

"If you're looking for entertainment for the weekend, there are a few eligible women I'll introduce you to. As long as it's not this one."

He watched Gary smile as his hand reached toward the woman approaching. She was a medium height brunette with a firm rack and great legs. He stirred at the instant thought of how he'd handle her and smiled broadly when Gary pulled her to his side, his arm protectively around her shoulder.

"Charlie, this is Trisha, Linda's younger sister. I'm sure you've heard me talk about her. She's the architect in the family." The woman finally turned full face toward him and Charlie almost swallowed his tongue.

"Hello, Charlie, I've heard a lot about you," she started as she offered her hand to shake his, then stopped dead halfway toward him, her eyes widening, panic setting in. In the few seconds it took to recover and shake her hand, too many thoughts went through his mind and he understood without question from the dread on her face she was thinking along the same lines.

"Hello, Trisha, I have heard wonderful things about you and your career." He hoped his voice resembled a somewhat normal tone.

He watched her eyes slip closed for only a steadying flash before she fixed a smile on her lips and answered.

"It's nice to meet you, too, Charlie. I've heard all about your engineering expertise and some others, as well!" Gary laughed openly and hugged her before releasing her.

"Be careful, Charlie. Our Trisha has a grand plan and her career comes first. And just in case your mind is working in devious directions, remember that she's the youngest in the family and all the older brothers and cousins have made it their mission in life to keep her pure."

What had been said in jest made her turn beet red. Charlie knew why but didn't let on.

"From the looks her brother is giving me already, I can assure you she'll be safe from me."

"Good, wouldn't want a best man with a cast or two trying to stand at the altar." His name was called out from the gathering crowd and Gary started to move away. "I'll leave Trisha in your company as long as we understand each other?"

"We understand," answered Charlie a bit too quickly.

Trisha stared at Gary's back as he moved away, slowly turning back to face him. He watched her draw a deep breath then look him in the eye.

"Hello, Chuck!" she managed with a strange smile. Her voice was just above a whisper. She glanced around them as if to see who might hear their conversation.

"Hello, Patty!" he whispered back.

Charlie watched her openly, taking in a long look from head to toe. She'd evolved since their last meeting, the girlish air long gone, and a mature edge had taken its place. She had been pretty when they met. Now she was beautiful. Her dark brown eyes pleaded with him silently and he smiled. Her sable hair swung chin length in a smart bob. She wore a simple two piece silk suit that hugged her ample bust and tightened around a smaller waist before widening slightly over her hips. While the skirt stopped just below her knee, he knew what the rest of her legs looked like, felt like, and he hardened at the memory.

The color was a soft peach with matching trim. A line of matched pearls sat in the cleft of her throat. She wore tan shoes that matched her handbag and kid gloves. Her caplet was the same peach, a foil for her tanned skin. His cock hardened at the idea that her cheeks reddened by his hand would clash. But by then, it wouldn't matter. The suit would be long gone and only a tanned length of her toned legs would be draped over his lap. The tips of his fingers tingled. He found he was rubbing his thumb against them, itching for another chance to feel her knelt over him, to accept how he touched her and where.

"Can I get you a drink?" he offered as a truce and watched her relax only slightly.

"No, thanks. I've got obligations to see to tonight." She visibly relaxed for just a second when she thought he'd avoid references to their last encounter.

"When then?" He held her gaze and she didn't look away. The lights in the restaurant were dulled, only candles shed extra illumination, but he saw her face heat with embarrassment.

"Not now, Charlie, please. My whole family is here." Her voice betrayed a hint of panic even though her features remained calm.

"All right, come to my room later."

She stiffened and took a step back, her armor in place as she narrowed her gaze on him. He recovered quickly, adding, "I just meant to talk, that's all." His hands moved up in a slight defensive move, but she didn't soften her look. He heard the adversarial tone she took and he let the corners of his mouth rise, managing to hold back a full out smile.

"I'm not what you think I am." Her voice was low, toxic to his ear.

"And what would that be, Patty?" He baited her and enjoyed it.

"Available!" she answered through gritted teeth. Several of the people around them suddenly noticed their encounter and she glanced around, smiling and laughing as if they'd shared a joke. Charlie inclined his head just enough for their audience to dismiss them.

"Fine, but we still need to talk. You decide when and where."

"Don't call me ‘Darlin’ like you've known me for years. What difference would it make? We both understood the terms at the time, both accepted them. Besides, as far as I'm concerned, Charlie and Trisha just met. We don't have anything to discuss." He realized she figured she had him at a standoff and relaxed slightly.

"That was before I touched you."

He wanted to be angry with her, but she'd managed to sum up their entire history very neatly, he realized. She had thought about him in the last twelve months. It was little solace to go on, but his cock overrode his brain with the motions her hand made.

Charlie opened the two upper most buttons on his shirt she wore, using his hands to push it off her shoulders, baring her as the cloth fell around her feet. She didn't move instead held his gaze almost in a dare.

"Tell me what you want, Charlie. How and where?"

His fingers grazed along her sides following the contour of her body until he could resist no longer and closed his hands around her breasts, his fingers tugging her already puffy nipples. She closed her eyes against the onslaught of his hands. She groaned from deep inside her when his left hand reached down. His fingers found her moist, slipping against her lips, just missing the intrusion she wanted.

Finally, he let his index finger slip inside her and watched as her body moved over his hand in a rhythmic motion. His cock strained against the material of his pants, but he knew not to stop. He drew a deep breath and slipped his middle finger inside her, too.

She gasped at the initial invasion and stilled until her body accepted him, her hips moving over him, her hands automatically rising to his shoulders to steady her. His thumb circled her clit while his fingers pushed higher, forcing her up onto her toes, seating her against his hand. She slickened around him and he wanted more, withdrawing his fingers only to have them forced back inside her by her own hand.

She held him in place and he could feel her muscles flexing around him, felt her stiffen when he twisted his hand, and felt her moisten his fingers a second time. Trisha slowly relaxed against him and let go of his hand, a signal he could finally pull away. The whole time he kneaded her breast, pulled her nipple, and squeezed to his liking, feeling her pussy muscles in sync.

Charlie didn't stop to think. He simply lifted her by her waist up onto her new Formica counter and dropped her there, lowering to lave her clean. She uttered words and he ignored them until he couldn't take it any longer. He dropped his pants and slipped his erection inside her in one smooth motion. 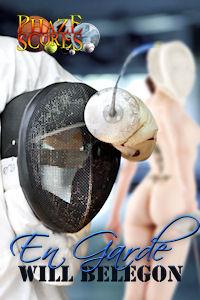