Charlie isn’t much interested in vacationing in Spain or in seeing a flamenco concert while she’s there. But she has let her best friend talk her into both, and when her eyes meet those of the darkly handsome guitarist onstage, she is instantly mesmerized.

A member of a secret blood-drinking race, Nikolas occupies his time killing daemons and playing guitar. He has given up on finding his soul mate after centuries of searching, and suddenly one night out of the blue, there she sit, spellbound as she watches him play.

Now all he has to do is convince her that she belongs to him and protect her from a pissed-off shapeshifting daemon Charlie never knew existed. 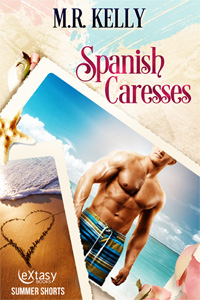 The tour bus pulled into the small village of Figueres just outside Barcelona, Spain. The grind of the bus gears shifted and the massive people carrier meandered between the closely packed homes. Ivy crept up the side of walls to end over brightly colored doors. Charlie Adams sat back against the seat, wondering again, why she had allowed her partner in crime, Tami, to pester her into signing up for this tour. Charlie already knew the answer to that question, she supposed. Tami had a thing for Spain and anything Spanish, the language…men…and really everything. The flamenco group they were seeing tonight, called Spanish Guitar, was a favorite of Tami’s and playing at a small club in the heart of the town. That was how Charlie now found herself sitting on a tour bus in the middle of an old world Spanish village. She gazed out the dust-smeared windows of the bus at the changing scenery of everyday life in a small village as they rolled from one neighborhood to another.

Although the ride to Figueres from the ship had taken less than an hour, Charlie couldn’t believe how quickly the shadows of early evening had blanketed the village. Glancing again at her watch, she hoped the performance wouldn’t be long because she wanted to make it back to the port in time to do some last-minute Christmas shopping. She looked across at a beaming Tami, who didn’t seem to have the same concerns.

Always a bit hyperactive, Tami leaned over her, excitement in every breath she took as she swung her head back and forth, trying to take in as much of the scenery as possible. “Charlie…we’re…finally heeeerre,” her friend screeched, flopping back onto her seat as the bus maneuvered into a large parking lot with only a few open spaces reserved for tour buses. “Come on, let’s go!” she squealed and grabbed her friend’s arm.

Charlie looked at the people now packed into the narrow aisle of the bus and, knowing how difficult it would be to exit right away, said, “Hey, you want to get trampled? By all means…I’ll catch up with the pulpy remains later.” Charlie laughed as they watched and waited until there were very few people in the aisle. Patiently tapping her on the thigh, Charlie knew her friend would squirm until they got off the bus. Suppressing a sigh, Tami leaned back against the seat, softly counting as each person exited.

“The musicians are going nowhere, Tami,” Charlie reminded her friend. “We’ve paid for the show, so relax, babe. We’ve got plenty of time.”

The night before, Tami had seen the poster in a bar on the mezzanine deck of the ship announcing the group’s performance and had gone over the top declaring her love for the guitarist. Charlie had to admit he was handsome in a dark, mysterious way. Not really her type, though. Personally, she had a thing for blond-haired, blue-eyed men. But Tami had insisted on their going to the performance. A bit on the superstitious side, she believed it was destiny that they were visiting the village at the same time as the group's next performance. She had insisted it was meant to be. Now she was determined to get an autograph and a touch and feel with the lead singer. It was a typical case of groupie worship, and she had dragged Charlie along for the ride and…of course moral support, she had argued. 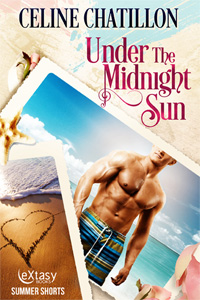 Under The Midnight Sun
Celine Chatillon
In Shelf
$1.99 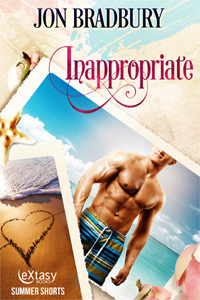