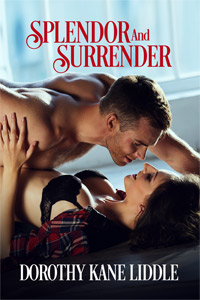 The measured thump of his footsteps coming up the walkway did not match the quickened ones of Ginny’s heartbeat. The last time Duncan had stood at her doorstep was to say goodnight. He’d said it just as he had in the past following a visit with her, only this last time he’d added a kiss. It was on the lips.

Since that moment, Ginny could think of little else. It wasn’t just a brush across her lips. It was a meaningful kiss, but what did it mean? It was firm, but too short to be strictly romantic, and too long to be clearly one of just friendship. The sound of Duncan’s approach to her door meant there would soon be another moment like the last one. Would there be another kiss this time? Would it clarify things or muddy them even more?

The importance of what Duncan would do when Ginny opened her door to him again had grown for her in the days since his last visit—grown in importance as well as in confusion and complexity. If that kiss had been a signal, it wasn’t going to be a simple case of choosing to have a suitor in her life, at this stage of it anyway. The thought of someone like Duncan providing that kind of attention was the reason she could feel her heart thumping. The physical attraction was real. His kind of looks, those deep-set eyes, luminous pale blue beneath thick brows of an embracing warmth, a face of such perfectly drawn angles to make any Euclid cry “Eureka!” His wide, expressively assured smile overflowed with humor and intelligence. He’d be irresistible to a woman of any age. That, for Ginny, was the whole exquisite problem in a nutshell. Five years earlier, Duncan Davidson had been briefly engaged to become her son-in-law.

The knock on her door caused Ginny’s breath to catch. She had thought of little else in the days since Duncan had last called on her. Time to think hadn’t helped. I still don’t know what to do if he kisses me again. I want him to, and I don’t want him to. The only thing I know for sure is that if he doesn’t kiss me at all, I will be crushed.

Crushed was an ironic choice of words, because crush was exactly what Ginny had been feeling for these last days. Though she tried to fight it, , she had to admit what that falling-elevator feeling in her stomach every time she thought of Duncan meant. Fifty-four-year-old Virginia Ambrose Carter had a crush on twenty-seven-year-old Duncan Bennett Davidson.

Ginny took a deep breath, closed her eyes, and put the kind of smile on her face she hoped would mask the mix of fear and excitement roiling inside her. She felt suddenly weak, vulnerable. Plummeting in that elevator again, Ginny opened the door and saw a natty Duncan Davidson, in a blue sports coat, open-collared, cream-colored shirt, a pair of slim Dockers and tasseled loafers, all under a mop of wavy auburn hair that draped itself thickly over his forehead and ears, guiding a girl’s gaze further to a square jaw and a Kirk Douglas-cleft chin. The outfit was something new for one of their casual visits, as was the bouquet of yellow roses in his hand.

Ginny tried to absorb the image in front of her, but the confusion only deepened.

“Hey, these are for you.” Duncan held out the bouquet. Ginny took it from him.

“Why thank you, Duncan. They’re beautiful. But what’s the occasion, if I may ask?”

“No occasion, just wanted to bring you some flowers tonight, that’s all. I hope that’s okay.”

“I love flowers. I’ll put them in some water. Please, do come in.” Ginny dropped the bouquet to her side, a reflex to what her mind was telling her to get ready for.

It came without hesitation or doubt. Duncan stepped to the door and bent his head toward her. She noticed his eyes close just before she closed hers. When their lips met, Ginny felt the same stirring within her the last kiss had caused. There was that warm feeling flowing gently over her, leaving slight tingles in the tips of her fingers. She fought an urge to press her lips harder against Duncan’s, and the desire to feel them firmly on hers flashed through her. Ginny also felt something more powerful, deeper within her, beginning to pulse this time.

The second she began to lift her free hand to slide it across the back of Duncan’s neck, she felt Duncan break off the kiss. It was virtually the same kiss as the first one, leaving Ginny just as confused and conflicted as before. This time, though, there was something she hadn’t felt following that first kiss, but which started building in its aftermath. She was pretty sure she knew what it was. It was something she had not felt in years, nor believed she’d ever care to feel again, something from a past long ago abandoned—wanton desire. 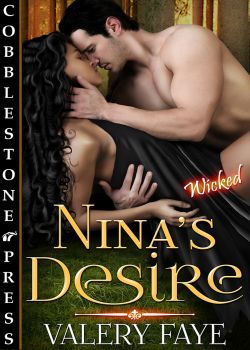 Her Dom's Secret Past (MF)
Suzy Shearer
In Shelf
$4.99
Tweets by
sirenbookstrand