As the last Shifter, the last true Wolf, Kaden has his share of problems. But he has recently become the holder of the Key. It is the key to all Wisdom.

Luke is a New York City cabbie and he’s seen his share of weirdoes and freaks. But when he spies two thugs beating on Kaden and he steps into save him, Luke enters a world that he never knew existed.

Quickly falling in lust with the young Kaden, Luke knows he will do whatever it takes to protect Kaden. Even if it costs him his life.

More From The Other 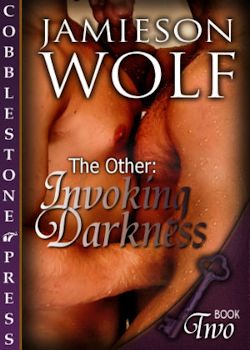 He felt it before it came.

He heard its feet padding along the ground in a determined gait. He heard it panting, its breathing labored and heavy. He smelled the blood flecked around its muzzle. But more than all of these things, he became aware of his body crying out for its maker.

The blood in his veins recognized him now, recognized the one who had changed him, remade him. A pulse started low in his belly, a throbbing energy that moved along his arms and legs, sliding deep into the crevices of his skin.

Kaden grimaced. He hated this part, loathed the pain that came after the soft tickling of energy, the subtle throbbing and pulse of power.

After the power came the pain.

It was always this way.

As he watched the moon move to its highest point in the sky, he slowly begin to change. His skin stretched, moving and contracting as if it were made of dough. A flash of pain, hot and bright, erupted inside his head, and he knew nothing for a few moments.

When he opened his eyes again the world was in black and white, color stripped from his vision with his new eyes. When the pain cleared, he sensed the other, his maker, who stood before him. A shadow among the other fragments of darkness.

His maker made a sound deep in his throat, a threatening growl that rumbled like thunder. Kaden looked up at him and, grimacing, stood to face him.

It had been like this for weeks. Each time his maker came, he was bitten. Each time a little more of his human self was taken away from him.

Tonight, the process would be complete. He would cease to be a man and become something else altogether.

Kaden didn't know why his maker had chosen him, why Edward had chosen to bite him. He would probably never know. Edward’s choice had no rhyme or reason; it simply was. Regarding his maker with his powerful eyes, Kaden knew Edward was at the end of his life.

His flank was dry and brittle. The fur that should have been shiny with health was like straw; his coat carried no sheen. His muzzle was flecked with blood that Edward had yet to lick away, and his ears, which were normally alert to hear everything around him, drooped. Once a glorious wolf, Edward was no longer beautiful.

I can't do what you want. Kaden’s voice echoed inside his head, and he knew Edward could hear him. You can't make me.

I can, and I will, Edward answered. I chose you, and you must repay me with this kindness. A cub must kill its maker. This is the way it has always been.

You created me so you can die?

No, Edward corrected. I created you so you can live. Truly live.

I had a life before you changed me.

No, you had a half-life. A meager existence, filled with insufficient experiences, half-truths, and lies. Now you are truly alive. I made you this way.

You made me into a monster.

I made you into a being of legend.

I was happy as a man.

Edward made a noise and spat on the ground in front of Kaden’s paws. You were useless, meek and nothing. Now you are a predator, a being of myth. Not many are so lucky.

You call this lucky? Having to kill in order to survive?

It is the survival of the fittest, Edward said. Such is the way it has always been.

Silence settled between the two wolves as they regarded each other: Edward with his green eyes; Kaden, with his blue ones. Their eyes were the only parts of them that remained human, the only parts that retained what they were during the full moon.

You must take me, Edward said. Otherwise, I will die in shame.

Edward came toward him and rested his head on Kaden’s flank, exposing his neck. Please.

He lunged for Edward’s throat, and his maker’s warm blood flowed as soon as his teeth punctured Edward’s flesh. The blood filled his mouth with a warm coppery taste, and Edward closed his eyes.

He has explained this part and told Kaden he would absorb everything Edward was when he took his life. Kaden would get his knowledge, his magic.

It was all in the blood. It was the way.

Edward’s body jerked beneath his, spasming and shaking with each new spurt of blood. Edward’s life entered Kaden, becoming one with his blood, which burned beneath his skin. His brain was on fire; his eyes, about to burst. His skin ached underneath his fur with a pain that made him cry out.

Then, just as quickly as the pain had started, it stopped.

Kaden lay on the ground and let the pulse, the throb, calm him. His legs began to grow back, his skin stretching to accommodate his longer human limbs. His fur receded into his skin, each follicle stabbing him like a needle.

He lay there panting, his naked body covered in blood.

Looking beside him, he saw the wolf; saw Edward. His form was still. Kaden knew he would never move again. He was different now. Edward lived inside of him, sitting inside him like an intruder. His human skin fit him wrong now. He was not free.

Sitting up, he knew what he would have to do for his maker.

Without a shovel, Kaden began to dig a hole. The cold damp earth smelled like leaves and broken promises. He did not have much time.

He ran, resisting the urge to change shape. If he changed now, they would be upon him in moments. I must keep running. Otherwise, my sister will have died for nothing.

The ground beneath his feet changed from gravel to concrete as he turned left and ran down an alleyway. Footsteps echoed behind them. He tried not to think about them, tried to focus on his own footsteps hitting the pavement under his feet.

Laughter erupted behind him, low and rumbling. He knew they were close. He could hear their footsteps echoing in the small alleyway, with the buildings on either side of him towering high above him.

Kaden’s breaths came in short, quick bursts. Then he tripped, stumbling along the pavement. Glass and rocks dug into his skin and tore the palms of his hands. He didn’t care; he pushed himself up and kept going, knowing that if they caught him, he would die.

The laughter rolled over him again in that low rumble that sent shivers down his spine. Kaden knew the laughter belonged to Roswell.

“There’s no use running,” his nemesis called. His voice was a bullhorn in the darkness, quick and abrupt. “We’ll catch you eventually. Why make it harder on yourself?” Roswell’s cockiness was legendary.

“Meat tastes better after a little exercise.” That was Rosen. Kaden would know that nasally voice anywhere. Rosen had killed his sister. Roswell and Rosen always traveled together, like some terrible version of Right and Wrong. Always filled with smiles and subtle, elegant voices. Voices like music.

Whether or not Roswell and Rosen were responsible for the vision suddenly appearing before him, he could not say: his sister, with blood on her face, her neck. Her body motionless, lying at an impossible angle. Her eyes wide open and staring at him as if in accusation.

Kaden wiped fresh tears from his face and kept running. He knew they would not stop until they killed him. He was the last. Roswell and Rosen had already killed his parents and his sister.

Only he was left.

With him gone, his kind would be no more.

Kaden pushed himself, forced himself to keep running. He thought of his mother, his father. His sweet baby sister. He wiped more tears from his face and a sob escaped his mouth.

Roswell laughed. “That’s it, poppet. Cry for your sister. She tasted so good on my tongue, so spicy. I wonder if you’ll taste the same.” Roswell laughed softly again, the rumble so close, so close behind him. “It’s only a matter of time before I find out.”

“Your father begged for his life.” Rosen’s voice was high pitched with excitement, which bit like cold icicles. “Every time we broke a bone in his body, he screamed like a little girl. Did you know that?” Rosen giggled loudly, the sound reminding Kaden of chattering mice.

Kaden said nothing but kept running, twisting down another alleyway. A flickering light gleamed up ahead and streetlamps buzzed above him. He ran toward the light, hoping he would be safer out in the open.

He reached the opening of the alley and his left ankle twisted. He fell to the ground hard, scraping his arms and hands in an attempt to break his fall. The bits of glass and gravel that covered his hands sparkled like diamonds in the poor light.

His breath was ragged now, coming out as a harsh wheeze. It took Kaden a moment to realize he was making that sound; that it was his breath making that noise. His chest was on fire. Wetness slid down his arms, his legs.

Blood. He was bleeding.

He was done now. He knew it. A fresh sob escaped his mouth, and he closed his eyes against the light of the streetlamp. The footsteps grew closer, closer, and then they stopped. Kaden willed himself to get up, to get to his feet, to continue moving.

But he couldn’t. He couldn’t move. He was done, and he knew it. The soft rumble of Roswell’s laughter rolled over him, and he said a quick prayer to his parents.

And he prepared to die. 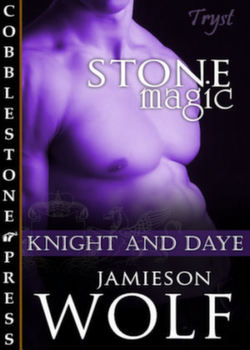 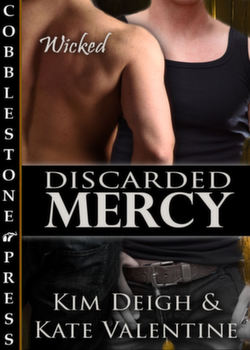 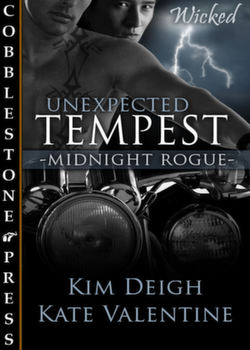