Reynard is the impoverished son of a cavalier, driven to highway robbery to support his sister, Emilia. But a puritan he robs proves to be his new neighbor--and Emilia returns to the house with her intended fiancé, who demands her promised dowry or the deeds to the family lands.

Finally a new sheriff turns up in town to put an end to the latest spate of robberies. Just when Reynard needs quick money all he can steal is the heart of an insolent roundhead who has a few secrets of his own! 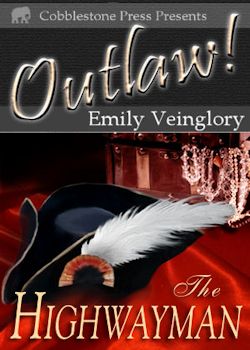 I put on my plumed hat—for it is expected—and a long coat to cover my clothes. I had only a few suits and could not afford for them to be recognized. I mounted the horse I kept pastured in the wild, high-walled garden and went towards the highway. My old stallion was a stolid, brown beast but well-conformed, and not given to moods. If I was driven to whip him, he could outrun anything the county had to offer.

There was a long-barreled pistol in each of my coat pockets and a saber by my side. Each of these weapons had been my father’s before he died; a little flashy but still sound. I had smudged soot and grease on the guns and cloth-wrapped the sword's hilt. They served me well. On a grand horse with my weapons about me—a few years ago I might have been taken for a Royalist coming home from the war—but all I could hope for now was not to be taken at all.

I passed by the old road cutting through the trees. At the crest of a hill, between the branches, I glimpsed the main house, kept closed up now. I lived in a forester’s cottage with the shutters locked to hide the light. But for my sister, I would have sold the lot to any fool who would have it and gone to be a sailor. But little Emilia, she required a few years yet to see her married off, preferably to one rich enough to return a suitably-hyphenated family to their former station. Once that was done, I could leave all this behind.

I rode down the road in the darkness of a waning moon, along the hidden ways until I passed the town, and proceeded more casually from there. It did no harm to have my robberies center upon the town. What could be more natural that that? I reined in my steed at the rumbling sound of a carriage. I was somewhat daunted, because a carriage was a greater risk than a merchant’s wagon or a single man, mounted or afoot. But my conscience rested easier as a conveyance this grand bespoke a man who could spare a little of his wealth and not suffer by it. Emilia was in the care of our aunt, and my sister had declared that new petticoats and slippers were imperative. I spurred my mount on and drew the more reliable of my silver handled pistols. I checked the flint with my thumb and set a charge in place.

A great lacquered carriage lumbered around the bend, and I put my old stallion squarely in its way. The driver urged his horses on, but mannered horses are not going to charge at anyone. I raised the pistol. Once it began, I felt a cold stillness free from fear; I became almost a different man.

“Try that again and I’ll put a bullet in the head of one of these fine bays, and you’ll be stuck here for a good while.”

My voice was low and carried without shouting. I had practiced such phrases dozens of times and was well pleased with the menace I now managed to bring to them.

Normally, people stay in their carriages ‘til poked out with the sharp end of a long blade. This man was a little different. The door swung open and a tall, grey-clad man jumped out into the muddy roadway.

“What is the meaning of this?”

“I’m masking my face, holding a gun and standing in your way. I’ll let you figure it out.”

Much to my surprise, he laughed. He was a tall, squarely-built man dressed in the puritanical way. His suit was dark and his mousy hair ragged and short, but all the same the cut of his cloth and the tilt of his head marked him as ”quality”. I sighted down the blackened barrel at his head but the roundhead did not seem perturbed.

“Do you have a pistol?” he inquired of his coachman as if passing the time of day.

The man may have had a weapon hidden away in some damp corner and as like to fizzle as fire, but he wasn’t admitting to it.

“Well, then,” the man continued. “The only question is whether this braggart would be prepared to shoot me if I made a run for it, or charged him.”

This one was certainly a talker, but he wasn’t carrying even as much as sword.

“It’s getting easier by the minute," I warned. "My finger is growing weary."

The man set his piercing gaze upon me. He did not seem to be sizing me up so much as looking me over. With a smirk he pulled a hefty purse from his pocket and tossed it into the slimy ditch at the side of the road.

“That’s all you’re getting,” he said with a shrug. “Unless you want to search me?”

I was not imagining the air of invitation in that taunt. I gestured with the pistol barrel for him to get back in the carriage. It might have been just a bag of stones on the verge, but on the whole, I was inclined to cut my losses. Most folk pretty much followed the script and coughed up their valuables. The others were more trouble than they were worth, and I had a few scars to prove it.

As the carriage rumbled away he pulled down the smudged glass window on its door and kept his gaze on me in that strange appraising way he had. I saw them linger on my hand as I edged my horse out of the way, and tracked his progress with my pistol.

After the carriage had passed from view I put the gun away. I drew my saber, a heavy weapon and not over-sharp. I fished up the purse by its string with a pretty flick of my blade. As I did it I realized my mistake. On my right hand a small ring glinted, gold with a crest upon it. How had I forgotten to remove it?

I turned and slipped away between the trees, my horse sure-footed even in the dark, upon familiar ground. This had the feeling of a fatal mistake.

The Stranger
Ardith Bale
In Shelf
$2.99