The Awakening of Alyce

Alyce Mason has it all until she is forced to choose duty to her ailing mother over her love for her high school sweetheart Gavin. Heartbroken, he leaves town for college and doesn't look back. She still loves him and regrets what she's lost, but feels that door is now closed.

Twelve years later, at Mrs. Mason's funeral, Alyce is stunned to run into Gavin, who has come home to pay his respects. But before they can rekindle their relationship, he's called away and she begins to have doubts.

"You must go out there and live your life now. I mean it. Don't get old and die with regrets like me..." These words, uttered by her mother on her deathbed, resonate with Alyce and, feeling she has nothing left to lose, makes a decision to do just that. She books a trip to a tropical resort catering specifically to plus-sized singles and their admirers.

Through the hedonistic activities she witnesses, and through friendship with a charming Italian, Antonio, Alyce comes to gain confidence in her own attractiveness and sensuality. And when Gavin once more returns to her side, she trusts in the love they still share. 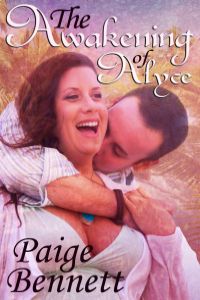 The Awakening of Alyce

“FREEDOM PARADISE,
WHERE SEXY PLUS-SIZED SINGLES AND ADMIRERS
CAN MEET AND MINGLE!
A VACATION WITH A DIFFERENCE!”

Alyce Mason read the brochure once again. The edges were getting tattered, and some of the ink had smudged off the pictures showing large people like herself dancing, and swimming, and in general, frolicking. She sighed and put the brochure back in her dresser drawer. It was just a pipe-dream, but now that she was in her thirties, she revisited it time and again. Freedom Paradise was a world away from mundane Rayeville.

She wandered over to her bedroom window. It was snowing again—thick, wet flakes that drifted in slow motion from the sky and blanketed the yard in a pristine sheet. The weather report called for record snowfalls this winter. Alyce cringed at the thought of all the shoveling ahead of her.

A pair of scarlet cardinals flew over, landing in the blue spruce a few houses down, drawing her attention to that house; the house where Lynda and Gavin had grown up. Lynda, who’d become her best friend, and Gavin who’d become her first love. It still hurt to think of him—of what might have been.

She flopped on her back on her bed and stared at the ceiling, allowing her thoughts to follow the dream just a little way. She was there, at the resort, tanned and beautiful, reclining on a chaise lounge on the beach, sipping on a fruity island drink. Gavin was there, sitting on a beach chair beside hers, holding her hand. He looked at her and smiled, telling her she was beautiful then leaning across the space to kiss her.

Alyce closed her eyes and imagined the kiss—warm, firm, and filled with passion. The kiss would deepen, and Gavin would stand and hold out his hand to help her stand so he could take her in his arms. He would pull her close, his tongue invading her mouth, teasing her tongue, his arms holding her tight.

She squirmed on the bed, feeling the warmth seep through her body, pooling deep in her groin, becoming an ache that was almost unbearable.

Alyce's eyes flew open and she sat up, unsettled at the direction her thoughts had taken yet again. Gavin wasn't around anymore. She'd had her chance twelve years before, when he'd kissed her on grad night and told her how he felt. She'd known then that her mother needed her. She'd made her choice, and she would just have to live with that.

A quick look at her alarm clock drew a gasp. “Damn! Mom's meds.”

Her mother was still sleeping when she peeked in the bedroom door. Alyce hurried to her bedside and got her mother's afternoon pills ready.

“Mom,” she crooned. She opened a fresh bottle of water, and poured some into a clean tumbler. “Wake up, Mom. It's time for your pills.”

There was no response. She set the pills and water glass on the nightstand, and sat on the edge of the bed, taking her mother's hand in hers.

“Mom,” she said, a little louder. “Come on sleepyhead. You need to wake up now.”

She peered at her mother's face, so serene, and felt a chill of fear when again there was no response.

“Oh no,” she whispered. She jumped to her feet and grabbed the phone, dialing nine-one-one. This was the time, something told her, that she had been dreading.

All About Jenny
D. J. Manly
In Shelf
$4.99
Tweets by
sirenbookstrand