The Edge of Nothingness

At the age of ten, Zach witnessed the death of his mother and the kidnapping of his sister during a vampire raid on their village. He watched as his mother's killer was murdered by another vampire, then in turn Zach was saved from a burning fire by the vampire. For years, the memory of that night, and the face of the vampire who saved him have haunted him.

Talked into the insanity of a resistance backed raid on vampire territory, Zach comes face to face with the vampire he couldn't forget.

Another completely new world. A world of vampires who rule and the humans they keep captive. 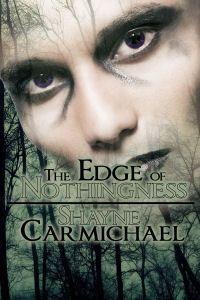 The Edge of Nothingness

Heat Rating: Sextreme
Word Count: 40,000
11 Ratings (4.1)
Paranormal Vampires/Werewolves Alternative (M/M, Gay)
In Bookshelf
In Cart
In Wish List
Available formats
PDF
HTML
Reviews
The description does not do justice to this book. This story is compelling. I couldn't stop reading. The characters, the concept, and the plot are original and well done. I wish I could give this book a 10.
Jilrene
Read more...
Excerpt

A dark flush colored Zach's face and neck, and he cleared his throat, feeling the heat. "Thank you," he said, his tone flat. "Under the circumstances, I suppose it's my hand."

"Out of politeness, I should offer to leave. But I am not a very polite person. It would be more interesting to stay and watch you. Don't worry. I will only watch. I promise not to touch."

"You can't be serious" Zach met Night's gaze. The glitter of Night's eyes became slightly more heated though the vampire made no move to touch Zach. Why did he feel as if he wanted to give into the vampire's suggestion? It was insanity. Yet, the unmistakable throb of Zach's cock showed him to be aroused by the thought of Night watching him. He hesitantly slipped a hand beneath the blanket and taking a deep breath, he closed his eyes. "I can't believe I'm doing this," he muttered, his breath stuttering for a moment. The movement of his hand beneath the blanket was obvious in its slow, up-and-down motion.

"I've always enjoyed others pleasuring themselves, Zach. Not so unusual for my nature. There is something very intense about someone allowing you to watch them in their most private moment." Night's voice seemed to caress over Zach's senses like the feel of dark velvet. "And I won't touch unless you wish me to."

It felt as if the sound of Night's voice reached for Zach, tantalizing him with unspoken promises as Night whispered to him. "So close you can almost taste it. It builds in you and shows in your face. So beautiful, so tempting. Let me see you come. I want to breathe in the scent of your desire, to taste it in my own unique way."

"Night." His hips jerked suddenly, the scent of his come filling the space between them.

As the vampire drew in the scented air, a soft growl erupted from his throat, yet he didn't move. "You smell so sweetly delicious, young Zach. I can taste you on my breath. And you called to me in your pleasure. Such a beautiful sound to me."

Zach licked his lips, shuddering through the last of the tremors. "How do you do this?"

"Do what? I have done nothing but speak to you. I do have a more powerful sense of smell that allows me to enjoy what you just did far more intimately than mortals can."

"How do you make me want you?"

"I have done no such thing to you. And I will show you." He placed his hand on Zach's stomach, and the contact sent a sudden surge of near unbearable arousal through Zach. Zach arched and within seconds had him pinned to the bed. Zach straddled Night's waist, cock hardening once more.

It was his own desire for Zach that Night fed to him. Just as quickly as it came, the feeling faded from Zach. "That is what happens when I feed my own desire to you. It is nothing like what you felt earlier, is it?"

Zach started to get up, but the sensation of silk against his hard flesh was too much. He gripped Night's wrists, pinning them to the bed. Without saying a word, he started rocking, the thin fabric the only barrier between them as he pushed their cocks together.

A low groan escaped Night with the friction. "Zach, look at me. If you wish I will take care of it, but push me no further. It may not be what you want."

Careful not to hurt him, Night rolled them both until the weight of his body trapped Zach to the bed. The downward shift of his body parted Zach's legs and he settled between them, running his hands slowly over Zach's inner thighs. The sight of Zach's hardened cock drew a hungry growl from him, he had to taste, if only to ease his own inner need. One hand wrapped the base before the heat of his mouth engulfed Zach.

Zach shouted, hips snapping up, pushing his cock down Night's throat as he shot. He tumbled hard into the pleasure exploding over his senses. His heart pounded and his body trembled with the sensations overtaking him.

With the last jerk of Zach's body, Night released him. Propped on his arms, he shifted to the side of Zach. "Perhaps your dreams will not be nightmares, young Zach."

Panting, Zach drew his hands down his face. "Gods. I can't believe I just did that with a vampire."

"It is nothing to be ashamed of. Now you can return to your hatred." Saying no more, Night silently disappeared from the bed.