Captain Tucker Conway lands on Mars with the cargo of twenty horses requested by the space settlers. The colony survives, but the planet itself has a secret, one that the young captain is determined to discover. 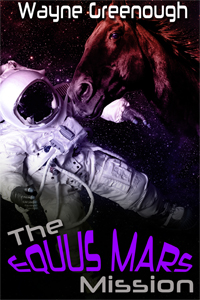 Two men occupied the Planet Patrol Academy office. An uneasy cloak of silence reigned, saturating the molecular structure of the room. Behind the desk was a tall, broad-shouldered, grey-haired man in his fifties. He was General Benjamin Crawford, the Commanding Officer of the Planet Patrol. In front of the desk was his lifelong friend, Wade Walters. Walters’ face expressed intense anger. His right fist crumpled paper.

Crawford sprang from his chair to pace back and forth. He stopped at the wall-sized window to stare as the mightiness of the Planet Patrol unfolded before his eyes. He watched the hurried rush of individuals wearing different colored uniforms, going about their duties with confidence and efficiency.

“Wade, this year marks my fortieth year with the patrol. I still remember the day I enlisted. I was thirteen and roaring with excitement at being accepted. That excitement has never left me.”

“Yes, Ben, the years have been good to both of us,” Wade Walters said. “You chose a lifelong career with the Planet Patrol, and I’ve spent decades operating one of Earth’s few remaining horse academies. Both of us met obstacles. We faced them and we conquered them.”

“You’re right. But this latest problem is the toughest the patrol has ever had.”

“Ben, I’m confident your plan will work. If it doesn’t, further colonization of Mars will be set back a good many years.”

Crawford thought again of the message from Mars.

“The colonists are becoming mutinous. A lack of free time facilities is seemingly the main cause of trouble. We must have the cargo we discussed with you as soon as possible.”

Shaking himself out of the lethargic daydream, Crawford stood straighter than he had since receiving the space gram. “Wade, all of our efforts to solve the Martian problem so far have failed. Now we come to our last, and I feel most effective, plan. The colony wants the cargo. If I work the takeoff crew around the clock, blastoff for the Mars Colony will be in five days. I haven’t picked a pilot yet, but I have one in mind.”

“Is he the lad you’ve mentioned before, Ben? This mission is a desperate one. Is he able to handle it?”

General Crawford nodded. “Yes, Captain Tucker Conway. He turned nineteen last month. Young, responsible, he’s the best spaceman in the patrol. He’s never failed a mission and I feel confident he is able to successfully complete this one. But as I’ve mentioned to you before he is a character. Conceited, arrogant, self-centered, subject to disobeying orders, plus having space hallucinations, that’s Tucker Conway. How about it, Wade? Do you think you can handle him?”

“I hope you’re right. I like the captain. I know that underneath his tough exterior there beats a heart filled with pure understanding. He’s a credit to the patrol. As far as explaining the mission to him, all I’ll tell him is that the Mars Colony needs the cargo for entertainment purposes. When he realizes the value of the cargo, I want you to inform him of its necessity.”

Wade Walters nodded. “I know you want to talk to him alone. I’m going to be busy overseeing that everything is organized and ready for shipment. I won’t see you again until blastoff.”

Out on the synthetically paved areas of the Planet Patrol a young officer was about to pass through the Liberty Gates for a twenty-four hour leave. He was looking forward to the hours of relaxation with joyful anticipation. The mission he’d completed had been long and dangerous. He therefore felt he was entitled to some peace and quiet.