Just what did Prince Alvin do that was so bad as to deserve being turned into a frog? Looking back, seducing the twin daughters of a fairy godmother was not a good idea. He was cursed until he could find the woman who would love him enough to break the spell.

Jasmine has a soft spot in her heart for all animals, no matter how many warts. She knew she had to take him home until he was healed, and just like the fairytale, she woke to find an irresistible prince in her bed after giving the frog a kiss.

Prince Alvin was more than willing to give Jasmine a happily ever after, but an evil stepmother has different ideas. Will love be enough to conquer all or will this be just the beginning of their adventures?

4 Delightful Divas Ms. Lyons has penned a cute and sensual story based on all the fairy tales we’ve all grown up on and love. I very much enjoyed reading the short read.
-Eliza of Dark Diva Reviews

Once upon a time…

There was a prince who wouldn’t listen to anyone, not even his father. He was too busy having fun. Prince Alvin wasn’t about to spend his birthday looking for a suitable wife as his father had suggested. He already had plans for his birthday, and none of them included wife hunting, despite his father inviting several eligible young women to attend a party that night. He didn’t want any proper princesses ruining his fun.

It was his birthday. Why should he have to change his plans?
Lord knew the King only wanted to marry off his son and get Prince Alvin to settle down, but the Prince wanted no part of that. Why would he want a wife when he could have any woman he wanted? He could have a different woman in his bed every night if he wanted, but that would all change if he got married. There was plenty of time to—ugh—dare he even think the words?—get married and settle down to have an heir. Now was the time to play. The night was still young, and Prince
Alvin didn’t want to think of the unsavory duty of marriage any more.

He focused his attention on the night’s entertainment. An exotic belly-dancer dressed in flowing multi-colored scarves circled and swayed, in the center of the room, prompting many of the men to whistle and invite her to take off the scarves that hid the sweet curves of her body. Her gyrating hips hinted at her experience and deftness in bed, and every motion was meant to entice.

Already the Prince’s private party was off to a great start, the women he invited were the kind he liked, not particularly bright, but every one of them had big breasts. Melon sized breasts that spilled over the tops of their dresses. They were not titled, or rich, but that wouldn’t stop the ladies from using their bodies to curry favor with a prince, and Prince Alvin didn’t mind being used this way.
Hell, he even invited a few of his friends to play tonight, and several of the women had already attached themselves to the lords, settling to the couches in positions that were too scandalous for any lady of good breeding to be in, perched directly on the laps of the Lords of their choosing.

“Are you hungry, my Prince?” One of the girls giggled next to him, holding out some fresh grapes over his head. She pretended to be coy, but she had been more forward than her sister earlier. Prince Alvin had taken a liking to a set of twins and had settled himself between them in the pillows.

“Only for you, Darling.” He gave her a wicked smile and bit at the air, as if she got too near, he might nip her. Damn, if only he could remember their names. Lily? Daffodil? Both of them were named after some kind of flower, but he didn’t want to ask them their names again. He knew he was too drunk to remember and he didn’t need to be told it by a woman, or reprimanded for his forgetfulness. He handed his jewel encrusted cup to the other woman, and turned to bury his head in her sister’s bosom. Soft folds of flesh surrounded his face. He reached into her dress and pulled one of her breasts free, sucking on the pink nipple until it puckered in his mouth.

“Alvin,” she purred, as he rolled on top of her, letting the grapes spill onto the floor. Giggling, she worked her fingers through his raven black hair. “You do have a healthy appetite, My Prince.”
Her twin sister drank from the wine glass, watching the two as they kissed knowing her own turn would be soon. Her legs crossed together, rubbing seductively. The prince’s prowess in bed have become legend and many women vied for the position in his bed as these two were now. Any woman would be proud to be share his bed.

Alvin raised his head, grinding his pelvis against the woman beneath him. Imagining how it would feel to get inside the two women made his cock grow harder in anticipation of tonight’s sexual feast. “I can’t help my hunger, when I am surrounded by such a delicious feast.” 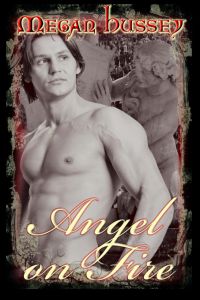 Virgin Under the Mistletoe (MF)
Paige Warren
In Shelf
$2.99
Tweets by
sirenbookstrand