The Man in My Bed

Jane Harris and Arty Harris were inseparable from the moment they met in college, until he’s sent to Iraq with his National Guard unit. An unexpected night of passion in her husband’s arms leaves her with a precious gift. 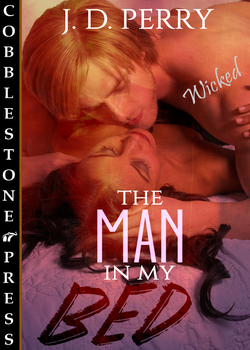 The Man in My Bed

I had seen Arty Harris on campus but had never given him a second thought. He was just another white face on a predominantly black college campus, except that he was one of the few white players on the football team. I had never been attracted to white guys, although I had always had white male friends.

Arty was at the birthday party. He had on a pair of olive khakis and a light blue, long-sleeved shirt. I was wearing a fitted pair of blue jeans that showed off my nice butt, a dark brown sweater, and heels. Our eyes met, and we barely looked away from each other for the rest of the night.

Arty was six feet with broad shoulders and a muscular body. He had played tight end on the football team until he injured his left knee. His eyes were the bluest that I had ever seen, and he wore his sandy blond, shoulder-length hair in a ponytail. I was the opposite: five feet, six inches if I stood on my toes, with short black hair and brown skin and eyes. I was the stereotypical black female, with a little junk in my trunk and large breasts.

Arty approached me after I had consumed a couple of beers. I was standing in a corner alone, debating whether to go home. He had a beer in his hand.

“See anything you like?” I asked. Why was I flirting? I didn’t know. It could have been the alcohol or a month without sex.

“Can I have the whole package?” he asked, showing me nearly all of his teeth. He had a lovely grin. Arty was a good-looking and sexy young man.

“I don’t know,” I murmured. “I wouldn’t want to give you more than you can handle. You may just hurt yourself.” I placed a hand on my hip and stuck out my chest, wanting to emphasize my attributes.

“You would be surprised how much I can handle.” He came closer, brushing my arm with his. “You’re the one who needs to reevaluate. Sometimes, you may get much more than you thought.”

“Are we talking about the same thing?” I asked, sipping from my can of beer and looking down. Damn. Why am I staring at his crotch?

“I hope we are.” He smirked. “I have been examining your package for quite a while.”

I blushed. He was coming on to me.