The Twin’s Initiation by Eva Hore

It is every man’s fantasy, a secret sex-cult, over which he presides. And every new member must go through an elaborate initiation ceremony. The twins are very willing participants – indeed they are the first women he has ever known to shift the balance of power to themselves – but then they are unaware of his identity. But for how long will he be able to stay anonymous?

Angie is the one that got away – although he fancied her for months she never wanted to be more than friends – and eventually she left the area. But when he has to go to her home town for a conference she offers to put him up for a few nights. His hopes are not all that high until she mentions her live-in partner, Chris. However, all is not as it seems and he quickly discovers that nights at Angie’s are going to be a lot more exciting than he ever dared imagine.

The Match by Kaysee Reneee Robichaud

Tough girl Joanne meets her match in the Bounty Bar when she encounter a fellow shooting enthusiast Hal Terr. She challenges him to a shoot off in Crosshairs Alley and as the tension rises so does their sexual attraction. Soon she pumping his other pistol and he gives her all barrels before shooting his load.

Nirvanaville is a blissful place of naked, happy free love and the beautiful, blond new arrivals Cyndi and Jack Mulroney are at first welcome additions to this Garden of Eden. But soon there is trouble in paradise ...

Felicity and Larry are trying to think of new ways to spice up their love life, when they are invited to a cat party where guests must wear a sexy feline costume. Felicity, feeling anonymous behind her leopardess costume, does an impromptu striptease on the bar. She is watched by an admiring Larry and several video cameras, and she discovers she has an exhibitionist streak she never knew she possessed. Soon she is having wild sex with every tom-cat in the place.

These stories have also been published in Indecent Proposals ISBN 9781907016585 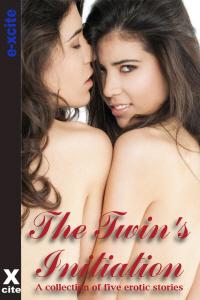 The thought of their initiation had me trembling. To see the two of them naked, and at the same time, was almost more than I could bear.
I’d organised and set up this association and was solely in charge of who I allowed to become a member. Identities were never disclosed and once united every effort was made to ensure secrecy. Only the women were allowed to show their faces and that was only when I gave the command.
So here I was, sitting up on my throne, cloaked in my hooded black robe with only my eyes visible. The girls didn’t know it was me up here and I liked it that way. My assistant demanded they remove their clothes, which they did slightly self-consciously, much to my delight.
Their bodies were glorious; perfect in every way. Their full breasts hung, swaying slightly as they breathed deeply with anticipation. My eyes feasted on their areolas, dark and inviting surrounding their perky nipples. It took all my willpower to stay quiet; not rush down to suck them joyously into my mouth.
Nice smooth rounded abdomens led down to their naked mounds and beyond, over their slits and into the caverns that every man so desires. Legs long and lean, thighs toned and muscular, their feet planted firmly on the floor. Their firm buttocks completed their flawless bodies.
I stood and took a few steps towards them, their eyes watching my every movement. Standing between their nude bodies, facing their lustful stares as they wondered, wide eyed with expectancy, what would happen next.
I waited, prolonging their agony before pushing myself between them. My arms reached out, my hands touched each exquisite face, my fingers travelling over their cheeks before slipping into their open mouths. Then downward, caressing each of their breasts, tweaking a nipple, squeezing hard, enjoying the moans that escaped their full and pouting mouths as their nipples hardened under my touch. Then my hands travelled further, gliding over their mounds to rest on their quivering slits. The heat emanating from them nearly sizzled my fingers.
They tilted towards me, desire weakening their will. Quickly, I parted the folds with experienced fingers, slid one deep into each hot, wet cunt before withdrawing to probe their outer lips, to part like petals from a flower and smear their velvety juices over their clits, the nubs hardening under my touch, desperate for a good rubbing.
I chuckled deep into my throat, waking them from their trancelike rapture as their eyes lusted over me.
‘Lie on the floor,’ my assistant demanded.
They eyed each other and then me unsure of complying.
‘The floor I said,’ she snapped.
They quickly did as they were told.
‘Open those legs wide,’ she said. ‘Pull back the hood from your clits and begin to masturbate.’
Hesitating for only a moment I watched excitedly as Julie quickly brought herself to an amazing orgasm, her juices oozing, her eyes beckoning me to come and taste her sweet nectar. Sarah’s back arched, her breasts jutting forward, her nipples rigid as she screamed with relief as she too exploded only seconds after her sister.
They writhed on the floor languishing in the aftermath of ecstasy now oblivious to everything except their own needs, their hands roaming over their flesh revelling in the touch as though it were a lover’s.
I clicked my fingers and my assistant dropped her purple robe. She was dark, with skin like ebony with a wild bush of black, pubic hair. She stood there, naked before them, breathing hard, her nostrils flaring as the scent from my two beauties assaulted her.
She paraded before them, their eyes never leaving her, skirting them as though a lioness ready to attack her prey. I drank in the atmosphere, breathed it in through every pore, enjoying the power I had over all.
The girls looked intently from her to me and I could see the wonderment flashing in their eyes as they dared to hope about what was to happen. Who would be pleasured first? Again I made them wait. Watched their legs shake as they lay before me, still splayed open, unsure of what they should do. Another flick of my fingers and my sultry assistant threw herself into Sarah’s waiting pussy. 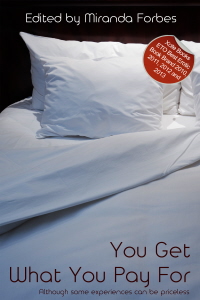 You Get What You Pay For
Miranda Forbes
In Shelf
$2.99