In the mythical land of Baraht, beautiful princess Sanji lives a life of soft but lonely comforts. When her brother's enemy, the ruthless warlord Raj-Kumar, kidnaps her and takes her deep into his mountains, he begins a campaign of seduction on her senses, awakening her to pleasures she has never known. Little does this barbarian know though, that his heart is also under siege, and Sanji might just be woman enough to win his love. 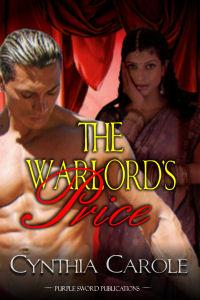 "The Warlord Raj-Kumar is looking for retribution from the Prince for his aid in the attack of Raj's people, to be paid back in grain and cattle. When the Prince is not cooperative, he kidnaps the Princess Sanji instead and asks for a ransom for her safe return. During the ride alone with her to his home, he could not resist his attraction to her and from that moment on, he made the decision to keep her with him forever.


"While Princess Sanji is riding with Raj-Kumar, she is seriously thinking over her life at the palace with her brother, the Prince. The conclusions did not look too bright for her even if she returns and on top of not feeling loved at home, she is trying to suppress her stirred emotions for Raj-Kumar. As the time arrives for the ransom payment, Sanji's stubbornness kicks in fully, and she almost loses a chance to be truly free.

"I was totally fascinated by The Warlord's Price because it had both the elements of betrayal and love involved from beginning to end. Sanji's life is not a happy one. With the death of her parents, her brother takes over the kingdom, which leaves her to deal with his wife. Cynthia Carole has written about the lives of both the desert people, who fight for domination of others, and the mountain people, who are not what Sanji expects from the tales she's heard. I found the two characters charming, very likable, and prideful to a fault. That made them that much more real to me because they showed their true feelings for each other and the sexual attraction was not one they could avoid. My only problem is that I wished the book had have been longer."

"Mountain people don't keep slaves. We follow the Book of the Gods more closely than our northern brethren." He reached out and cupped her face with his large hands. She closed her eyes while his fingers ran over her skin. One hand moved to the back of her head, holding her still while his other hand caressed her neck, sending chills over her body, chills and heat too. He ran a single finger down the delicate side of her neck and to her shoulder, leaving a burning trail of awakened skin.

She tried to concentrate on his words instead of his hands. Must remember to breathe! "Soso youyou think of us as brethren?" She opened her eyes to stare back at him, her dark eyes meeting his strange golden ones.

He scowled, but didn't withdraw. If anything, he moved closer, his scent wafting over her, making her knees feel weak. "I used to. Until your armies torched our fields and slaughtered the innocent. Now, I think of you as a scourge, and I wonder when the gods will teach your people a lesson."

She was so shocked by the disparity between his harsh words and his gentle tone that she gaped at him in confusion. He leaned down and kissed her, taking her open mouth with his and holding her head in place with one strong hand. His lips moved over hers while his tongue pushed forward, plundering her with slick forcefulness. This was nothing like Mal Jorher body arched with response, heat flooding her from her groin to the tips of her nipples. Her thoughts fled as he pulled her against his hard chest, pressing her breasts tight, her body bending and molding to his. Could anything in the world feel this good? Was this what the ladies in the hareem giggled about when they talked of the passion of men? She felt a demanding swell against her stomach, she groaned into his mouth.

He is my enemy. He wants to use me to hurt my brother. These thoughts were like cold water on her passion and she struggled, half-surprised when he released her. She stumbled away, a hand to her swollen lips. He stared at her with a glazed lusta seething, burning intensity that made her worry that he would grab her up and finish taking her.

The Seduction of Anne Ruby (MF)
Samantha Lucas
In Shelf
$5.99
Tweets by
sirenbookstrand