An afternoon spent avoiding his sister places Rush Donovan on a collision course with Fate. Interrupting a possible violent disturbance brings him face to face with the one woman he never wanted to meet. His mate.

Rush Donovan is used to being in charge and protecting others. He has been protecting his sister since they were teens. He is also the Alpha of the local pack and a detective. Protecting others is second nature to him. When he sees a pretty woman being harassed by a man twice her size, he steps in to help the lady.

Grateful for Rush's help, Kaisha “Kay” Noelles doesn’t understand why her ex-boyfriend has all of a sudden decided to start harassing her. She also finds Rush to be handsome, sexy and completely irresistible. When her ex’s treatment lands her in the hospital, it is Rush who comes to her rescue again. He takes her in and helps her heal both body and mind. But Rush has a secret that might just drive Kay away forever. She doesn’t know that he is a werewolf. Once she does know, will she run or stay to be the mate of an Alpha who will love her forever?

Alpha Awakening by Diana De Ricci is a beautiful love story. I loved Rush, the overly protective big brother and warm-hearted man with a heart of gold. I like how he is willing to help others and doesn’t think of the impact on his own safety. Kay is a strong lady herself; she just finds herself in situations in which she needs help. Otherwise, she is independent and self-sufficient, but also soft and loveable. I found this combination a likeable quality. She is definitely someone I would want to know.

I found this story to be endearing and well done. I would love to find out how Rush’s sister fairs in the future, so I hope there will be a sequel for her. When you're in the mood for a heart-warming love story, try Alpha Awakening. It's a thoroughly engaging read.

Imagining his hands on her body and the rough pads of his fingers caressing her, sent tingles up and down her spine. Her nipples budded into aching points beneath the t-shirt, rubbing beneath the soft cotton. Her head tipped, feeling the exploratory touch over her breasts to tweak and play with them before he cupped each to tug at the nipple with just a twist of pain. The shock sent a jolt of awareness straight down to land with a pulse between her legs. She moaned breathlessly, gripping the edge of the sink to stay standing. Her legs trembled and liquid heat dampened her pussy.

The warmth of his breath would flow over her neck, his lips and tongue teasing her the same way his fingers would, with flicks and nips of teeth and fingertips. The trail of his hand would linger on her stomach, tracing her bellybutton, making her squirm. Laving against her pulse with a slow, torturous tongue, his fingers would delve between her legs, gliding effortlessly into the moist folds of her sex. A shudder racked her frame as desire spilled into her bloodstream.

“Oh, God,” she moaned. Shaking, she drew a breath, collecting herself. She was in his bathroom for heaven’s sake, daydreaming. A sexual daydream! And if she’d had even another two minutes, she was sure she could have orgasmed imagining his touch alone. Another slow inhale and she released the sink, her insides still quivering and needy. She felt flushed from her cheeks to her knees, but with each breath, she trembled less with wanting.

Washing her hands as best as she could without seeing what she was doing, she blanked out the detailed pictures her imagination had kindly given her. She was only marginally successful.

Shaking the water off her hands, she carefully turned, reaching for the towel she knew was close by, and instead, bumped into a hard set of abs.

“Oh!” she squealed then stumbled a step, losing her balance at being taken by surprise, right into his arms. Warm and strong, he caught her. She swore she could feel herself melting from the surge of body heat between them. It went miles deeper than even his voice had gone the day before.

“Sorry. I wasn’t trying to sneak up on you. I heard you moving around and wanted to make sure you were okay.”

Her heart stuttered, and she fought to reset her equilibrium. Her brain was threatening to short circuit. She was pressed into the wall of his chest and stomach, her nose inhaling his scent of pure male and warmed cotton. A low purr formed in her throat. He felt so good. Without planning to, she rubbed her cheek against his chest, her arms winding around his waist naturally.

She’d never in her life reacted to a guy like she did to Rush. He made her feel absolutely wanton.

The weight of his fingers sweeping across her back sizzled against already sparking nerves, recreating the delicious desire she’d imagined only a few short minutes before. Molding herself against him, her blood raged. Good God! Was that his…? She licked her lips unconsciously. It wasn’t small by any means, long and thick and… She knew she was drooling, drowning as her imagination and body left her restraint in the dust.

“Kay?” Her name sounded strained. The racing of his heart thundered beneath her ear.

Solid muscled thighs brushed against hers and her body went liquid. The urge to climb him like a tree and hang on blazed like a living need within her center.

A low groan vibrated his ribs and his arms tightened, encircling her. “Kay, you’re killing me.” She felt him move as he bent practically in half to bury his face against her neck. “Sweet hell. You feel good.” 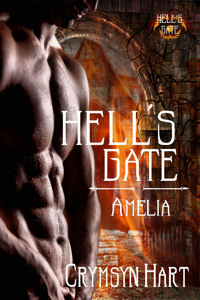