The Witch, the Hunter and the Bride

A witch ensnares a simple hunter in a web of desire with musical enchantment. The hunter battles guilt and weakness while trying to hold onto the love of his bride and save her life.

When Monteh the hunter becomes trapped by Nagoi the witch’s enchantingly lustful song, he finds he must battle the guilt that threatens to overcome him while hiding his unwanted adultery from the wife that loves and trusts him. When he does find the courage to sever his vile relationship with the witch, he finds the task isn’t as simple as he had hoped. A dark sorceress isn’t easily spurned. 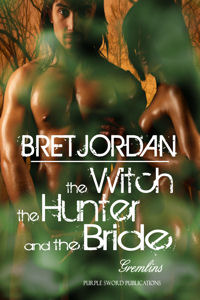 The Witch, the Hunter and the Bride

Monteh stepped into a leaf-covered bank next to a stream, leaning his bow against the white bark of a tree. He stretched his neck back and forth, working out some of the strain from his tired muscles. Nagoi hadn’t arrived yet. He wasn’t surprised, for she never showed up before he did.

He hated coming here, but he couldn’t help himself. The seductive witch had him under her spell, calling him to this place two, sometimes three times a week. At least now she showed some affection, no longer treating him with the cold embrace of a slave whore.

He had been hunting deer almost a year ago when she had captured him in her spell. He had his bow pointed at a huge buck, string pulled taut, when a mellow song struck his ears. The bow slowly pointed toward the ground, the string went slack, but his body had a different reaction. Beneath his buckskin breaches his member came awake, the sweet music enticing it, bringing it further to life with each seductive note.

The bow dropped from his hands, forgotten as he stumbled through the thick woods, searching for the source of the hypnotic sound. He didn’t walk far before seeing her. She sat on a stone that rose from the ground like the fin of some great earthen fish. Her hair fell down her back and over her shoulders, a glistening midnight waterfall. She wore a skintight black dress that hugged her curves and squeezed her ample breasts together. A mischievous smile teased the edge of her supple red lips. Monteh had to have her. Every fiber of his being wanted to grab her and hold her tight, to sink himself deep into her. His cock twitched and strained against its leather confines, a hunting dog with a fresh scent. It wanted release. He wanted to release it.

She didn’t speak as she slid off the lichen-covered stone, folding her legs beneath her, and summoned him with a wave of her hand.

Monteh didn’t remember walking toward her, but suddenly he stood over her, looking down into her almond-shaped eyes, the eyes of a cat and as black as the void. He knew he should be overcome with fear, running for his life to escape the evil creature, but desire overwhelmed him. He had to have her, the mysterious and seductive woman.