Crown Prince Jayce Cobmara has taken a lover—his bodyguard, Damian Scarpela. On a planet that oppresses women and persecutes any alternative lifestyle, the men steadfastly protect their secret relationship. When a woman stumbles across the lovers, they have no choice but to take her captive.

Law-enforcement agent Izzie Szabo must fight her attraction to her two handsome captors. Although she assures them that she’ll keep their important secret, they keep her at a desert hideaway that turns to paradise as the three explore their mutual attraction. The fiery-haired Izzie refuses to consider becoming a princess on a planet that treats women like second-class citizens.

When an assassination attempt is made on Jayce, Izzie and Damian work together to uncover a plot that will shake the prince’s faith in his homeland. Can the love the three of them share help Jayce find a way to fulfill his royal destiny? 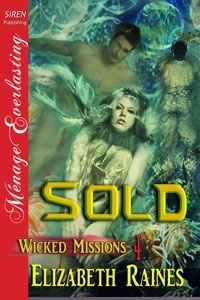 Easing the door open, Izzie stepped into a room that was obviously some kind of home. Drawn to the warmth of the place, she wandered around, taking in the native art, such beautiful paintings and sculptures. Silk pillows were scattered around the tile floor. Comfortable chairs spoke of the ease people could take in this place. An extraordinarily large viewscreen was mounted by the chairs. A grand piano sat to one side, covered in gold and silver frames with holopictures of smiling faces of men and veiled-covered women. When she recognized the king in several of the pictures, she gasped. Shit, but she’d stumbled across the home of someone royal.

Hurrying back to the door, Izzie heard male voices approaching on the other side. “Fuck.” If she was caught in the living areas of the palace, she was up proverbial shit creek. Not even her status as an I.D.E.A. agent would prevent the outrage of the royal family that their sanctity had been breached. Her stealth training kicked in as she quickly found a hiding place and set in to wait out whoever was arriving and hope they’d leave in a hurry.

“Are you sure no one’s here?” a rich baritone asked, the sound of the door closing following the words.

“Positive,” another deep voice replied. “The reception will be at least another hour, and my father told me he’s going to one of his wives tonight.”

“Then come here,” the first voice said. “I’ve dreamed of touching you all day.”

“I thought about you too—about fucking that sweet ass,” the second replied.

Peeking out just enough to see the faces of the men who’d come into the room, Izzie almost choked. Both were handsome. Muscular. Downright gorgeous.

The taller had blond hair that reached his earlobes, and the strands were straight and thick. She nibbled on her bottom lip when he raked his fingers through it, wondering if it was as silky as it looked. His blue eyes were the shade of an afternoon sky.

The second man was also blond, not surprising on Bromond, but he wore his hair much shorter, almost a military cut.

The taller man spoke. “Well, c’mere then. I need you to kiss me, Damian. Now.”

“Gladly, Jayce,” Damian replied. When he took the last few steps toward Jayce, his brown eyes scanned the wall, making Izzie fear she’d be seen from where she hid behind several large ceramic urns. Holding her breath, she ducked back out of sight, waiting and praying they were too involved with each other to notice her playing voyeur.

Since when had her fantasies taken on same-sex liaisons? When had the thought of two men making love to one another become part of what she craved so much she wanted to jam her hand down her shorts and rub her sensitized clitoris until she reached climax? When had she begun to imagine herself as a part of a triangle that included two men worshipping her as well as each other?

Duh. When one of her best friends, a man she’d trained with in the agency, had become a part of a three-way marriage. Every time she thought of Spencer with his husband and wife, Izzie felt a jealousy that bordered on pathetic. The notion of three people being that close, of two men loving one woman, became something she knew would haunt her the rest of her life.

“Suck my cock,” Jayce demanded in a sultry tone that made shivers race the length of Izzie’s body.

A needy whimper slipped out before she could stop it as she imagined the blond with the buzz cut unzipping Jayce’s pants. An enormous cock would spring forward, rising from a nest of flaxen curls. Clear fluid would drip from the slit as sensuous lips closed around the engorged head and—

Izzie couldn’t stand not seeing for another second. Peeking out of her hiding place, she greedily took in the vision before her. Jayce’s jeans were puddled around his ankles, and Damian knelt in front of him, his lips spread wide as Jayce pumped his cock into his mouth. Her womb flip-flopped in response, and she almost came on the spot.

Jayce regretted that she had to hide that beauty behind a veil just as she had to cover her shiny red hair. Her skin was smooth and clear. Firm, full breasts were crowned with rosy nipples that had hardened into tight pebbles and tasted as good as they looked. The curls covering her mound were the same flaming color as the tresses on her head. With a smile, he scooped her into his arms, nodded at Damian, and carried her to the bed.

Damian yanked back the cover, and Jayce set Izzie on the white silk sheets. While Damian crawled across the mattress to reach the far side, Jayce disrobed, flinging his clothes to the floor in his hurry to feel her skin pressed against his. As he knelt on the mattress, Izzie opened her slender arms wide, and he fell into her embrace. Settling his body over hers, he forced her thighs apart with his knee and let his swollen dick press against the moist heat of her pussy, groaning at how wonderful it felt to know the softness of a woman’s body. The musky smell of her arousal made him growl in need, and it took all his self-control to not thrust into her body, pounding into her sheath until he found the release he craved. But he’d die before he’d put his own needs before hers. In a way, he was losing his virginity again—this would be his first time with a woman.

Leaning in, Jayce pressed his lips to Izzie’s. She tasted so sweet, and when her tongue slid into his mouth, he grabbed it gently between his teeth. She retaliated by sliding her cool fingers down his back, leaving a trail of shivers in her wake. Her palms settled against his ass, pressing him harder against her cunt. Jayce tore his mouth away. “God, Izzie. I want you.”

Brushing kisses over her neck, he touched his lips to her collarbone and then moved lower, drawing the tip of a breast into his mouth. Izzie arched her back and drew up her knees. Her fingernails raked across his lower back. He loved how quickly she responded to him, but that wonderful response was making him burn to fuck her. Trying to focus on her pleasure, he kissed the smooth skin of her stomach, circling her navel with his tongue.

Izzie buried her fingers in his hair and tugged. “Fuck me, Jayce. Now.”

Sliding his hand over the soft hair on her mound, he slipped his fingers between her lips and found a hot, wet welcome. Her fluids were sticky and slick, and he drew his fingers back to his tongue to sample the flavor.

Izzie’s cheeks flamed, but she didn’t turn away. Her reactions were so real, so raw, that any memories he had of women from the harem were swept away. Their performance had never been heartfelt, but the feelings Izzie revealed in each honest touch or sincere moan hit him with the force of a lightning strike. He couldn’t wait another moment to be inside her.

As if reading his mind, Izzie wiggled her hand between them, grabbing his cock and leading it to her sheath. A few pushes later, and Jayce was finally able to thrust inside her body. 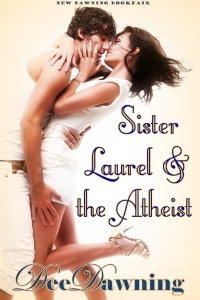 The Alphas Claim Their Mate (MFM)
Marla Monroe
In Shelf
$3.50
Tweets by
sirenbookstrand