Sno has been waiting for her chance to become a monitor, but it appears she is of more value as a medic. When a medical emergency renders a monitor unfit, Sno steps in and rigs herself up to plunge into his mind.

Once inside his mind, she meets the man who has caught her imagination and her heart without even speaking a word.

Kyron was not expecting the woman who crashed into his blizzard but warming her takes priority and his heart is not the only thing heating up when he takes her into his arms. 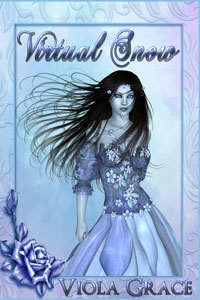 Once the first hour had gone by, Sno filed the readouts and continued her rounds. She managed one circuit of the monitor stations and was just returning to seven when the monitor began to convulse.

Sno hit the alarm and the other medics came running. “Call the backup.”

Teril looked at her in shock. “We sent the spare home.”

“Fine. Get him loose. I will step in.” Against protocol, she opened her helmet and unsealed her bio suit. She put the leads on her own temples the moment they were free, and she heard a crackling in the corners of her mind. She was a good fit.

“I have initial contact. Get me in that bed and hook me up. My patient is trying to wake.”

It was true; the Edinar was fighting to free himself from consciousness.

With the previous monitor taken to a nearby gurney, Sno grabbed new needles and jacked herself in. She set the drips and leaned back as the drugs took her into a deep sleep where the man near her was waiting.

A tight bodice, fluttery skirt and long black hair made her laugh. She wasn’t going to look like that when she woke up.

If her patient was being difficult, it was a good idea to use what she could. She unlaced her bodice and jacked her breasts up into an obvious position.

She went looking for the patient and found herself walking into a snowstorm. “Perfect.”

She sucked in a deep breath and waded into the storm hiding the man she was looking for. “Hello? Hello? I am lost.”

Playing the helpless female wasn’t really her style, but whatever it took to calm the patient and get him to relax. It was a long process and his being awake would make it agonizing.

She continued on through the snow, her skin turning white and then blue with cold. She was shaking wildly and continuing to make her way forward, running through the whiteout. She collided with a wall and bounced back to land on her butt.

Hands came out of the wall and lifted her up. She was wrapped against the chest that had been so immovable to her. Her body was shivering uncontrollably.

“Idiot.” She heard his voice, and it was deep and well-modulated for someone of his size.

He walked with her through the snow, covering her with the white fur that was draped around his shoulders.

He kicked open a door and they were suddenly inside a warm, cozy room. He closed the door behind them and carried her to a bed.

He stripped off his clothing quickly and did the same to her. So much for advertising the goods, he looked right past them and pulled her against him before yanking the covers over them both.

A Fresh Start for Tori (MFMM)
Becca Van
In Shelf
$3.99
Tweets by
sirenbookstrand