Owen has always been able to see the Witches.

Every year at Halloween, they appear for three days and then disappear. This year, however, is different. This year, something is hunting the Witches.

Jace, the only male Witch in existence, goes to Owen for help. Jace knows that there is a magic inside of Owen that can help them defeat the hunter.

He also knows that Owen has been hurt, that he must do what he can to heal Owen’s heart, even if it means losing him.

Will their love have a chance to grow or will they become the hunted? 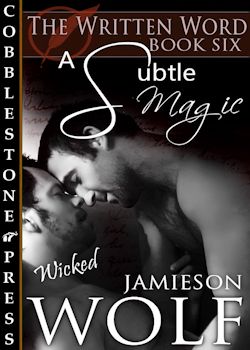 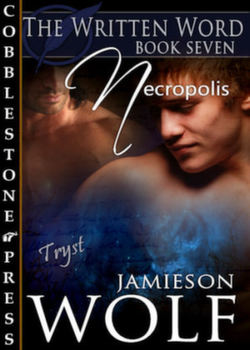 Owen Wolfe felt them before he saw them.

The street around him was dark; it was the moment between dusk and night when the streetlamps had yet to come on to welcome the night with their constant buzzing. He flicked his lighter, the momentary flash of light hurting his eyes.

Putting the flame to the end of a cigarette, he inhaled and blew out a puff of smoke that glided briefly on the air before disappearing. He inhaled again and waited, knowing they would show themselves soon.

He wasn’t disappointed. He saw a flicker of blackness out of the corner of his eye and watched as that flicker became a foot, a leg, and a torso. A pale-skinned person stood where there had been darkness only moments before.

She had long hair that fell past her shoulders. It was the same black as her dress and seemed to drink in all the light and shine with a brightness that only night could bring. Her pale skin glowed in the darkness of the street and her eyes shone like jewels.

She turned to face him and smiled in greeting. It was a smile of knowing, a smile of wisdom. Owen shivered slightly even though he knew she meant him no harm. Returning the smile, he bowed his head.

When he raised it again, she was gone.

With a muffled curse, Owen dropped his cigarette to the ground, sparks flaring briefly when the cherry hit the pavement. He lit another one and sighed.

He inhaled a mouthful of smoke and started walking towards his apartment as more shadows stepped out of the darkness around him.

The Witches had returned.

It was the same every year, Owen thought.

Two days before Halloween, the Witches would come. They would materialize out of the darkness, and they would roam the city, black specters that no one but him could see. Then, after All Hallows Eve, after they performed their magic, they would be gone.

He had seen the Witches each year since he had turned thirteen. At first he’d been frightened of them, terrified. He’d had nightmares about the Witches every night for months before they appeared. Gradually, however, his fear subsided into acceptance.

The Witches had never harmed him and treated him with respect when they passed him in the streets. The pale-skinned women had never spoken to him, but he didn’t expect them to. Something freed them for three days every year, and he wasn’t about to take up their time.

For Owen, it had become a normal occurrence. He watched for them on the morning of the 29th of October. One moment they weren’t there and the next, they were, but only to him, slowly moving out of the shadows.

At first, he thought they were vampires or beings that existed on the energy created by others. But that didn’t seem to be the case. He watched the Witches as they followed certain people, eyeing them with a soft kind of sadness. Owen wondered if they came back to this plain to watch after their loved ones.

It filled him with despair to see the Witches glide noiselessly through the streets for those three days and three nights. They seemed like such sad creatures. He wondered what they had seen in their lives to fill them with such sorrow.

He sighed and fished his keys out of his pocket. He opened his apartment door, stepped inside and closed the door behind him.

Owen took a beer out of the fridge and lit another cigarette.

He felt drained and tired. He’d waited for the Witches to show all day, and they had only showed themselves as dusk turned into night. Waiting for them to show again, to prove they weren’t a figment of his imagination was always tiring. However, if he was going to be honest with himself, Owen had to admit he looked forward to seeing them each year.

They were a part of him for some reason. He was the only one who could see them in all of Garden City, he was sure of that. But why him? And what could he do for them? What did he have inside him that others didn’t?

He fell onto the couch in his living room and closed his eyes. He could hear the city life outside of his apartment window: the irritated sound of horns, the pleasant murmur of people talking, the soft sound of classical music coming from someone’s apartment. It never failed to amaze him that even when the lights went out, when the darkness took over the day, life continued to thrive.

He should be writing.

He had a new short story to finish and a novel to work on. His publisher was patiently waiting for his next masterpiece. Owen was always more comfortable when he was writing, when he was creating worlds to play in. He had an article due for the Garden City Tribune as well. But all that could wait.

For now, his concentration was elsewhere. His head was full of Witches.

He opened his eyes and took a sip of beer. It felt cool in his throat, and he sat up to get a cigarette off of his coffee table when he stopped.

Sitting in front of him, in his armchair, was a Witch.

Only that wasn’t quite true. This Witch had the same dark hair, the same piercing eyes and pale skin. But this Witch was a man. All of the other Witches he’d seen had been women. He’d never seen a male Witch before.

Owen looked into the Witch’s eyes, felt those eyes looking right into him, right into his soul, and felt a flush begin to flame in his cheeks. He felt hot and short of breath. His heart beat faster.

The Witch stood, his pale skin glowing with its own soft light. He smiled at Owen, and Owen found himself smiling back. It was a predator’s smile, a smile of want. And right at that moment, Owen had never wanted another man more.

Owen stood, taking in all of the Witch. His robes were made of what looked like thin layers of black gauze, and Owen could see the Witch’s cock beneath the fabric. He felt his own cock grow harder in his jeans. Not trusting himself to speak louder than a whisper he asked, “What are you doing here?”

The Witch smiled at him, showing blinding white teeth. He had gorgeous blue eyes, and there was a dimple in his chin that Owen hadn’t noticed before. “I came to see you.” The Witch’s voice sounded like water bubbling over rocks, like the sweetest music Owen had ever heard. His cock jerked in his pants.

“Why did you come to see me?” Owen could barely get the words out. He watched as the front of the Witch’s robes twitched, as its cock grew harder.

“To find out if you were real,” it said.

It looked at Owen, smiling. Owen felt his cock grow firmer and grimaced slightly as it strained against the denim of his pants. “Now that I know you are real, I will have sweeter dreams.”

Owen watched as the Witch faded, as its body began to meld back into the darkness. It all seemed like a dream; one moment the Witch was there and then he was nothing but a soft glow. Then, as the glow gave itself to blackness, the Witch was no more and Owen was left with only his thoughts for company.