One night a year in Hunter’s hometown a strange seduction takes place. When his longtime friend asks him to return on the one night he has vowed never to return, Hunter reluctantly agrees. The little town is dark and eerily quiet as Hunter approaches. He parks his car and forces his way through thick vines and trees to a secret cave in the city park where the two men have agreed to meet. Hunter is quickly pulled inside and into a seduction like no other. Rumors of a man dressed in an extremely unique costume looking for an unsuspecting victim is less than believable to the level headed Hunter, but when the costume is found in a place very familiar to him, he fears that this year he may be one of the hunted. 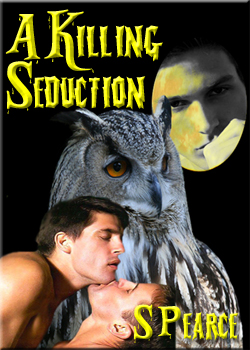 There was always a Halloween celebration in Hunter’s hometown, although he had never attended. His parents sent him the full account of the festivities that were proudly displayed in a book every year. It was an awful display really. Photographs were taken of everything and everyone including full frontal nudity and actual sexual acts, though faces were always discreetly covered. It seemed to Hunter that for the last few years the photographs had gone from bad taste to sickly grotesque. He could not be certain from the shaded faces, but it appeared as though every year in the photographs at least one of the bodies was lifeless.

Trey looked up at him. “You can’t get there, can you? You want it so bad, but it won’t happen.”

Hunter looked down at Trey. “Why is that?”

“I don’t know. It’s the same for everyone who comes in here, but once you leave the cave you will have the orgasm of your life.”