A Love That Defies Death

Aria Bastion is aging without the power of Keir’s love. Jace has become her keeper, but he can do nothing to offset the foreseeable death in her future.

When nineteen-year-old sorcerer Laniar Storm walks into their lives, he may be the key to give Aria and Jace a new future. Laniar’s young body holds a secret that Aria and Jace are the last to discover. Can he overcome his own insecurity to find a place in the lives of the two highest powers Jasta has ever known?

When the power again calls strife into their lives, can Jace and Laniar work together to save Aria’s body and mind, or will the dark claws of death sink their talons into her after all?

A Love That Defies Death

The passing years took an odd toll on Aria after Keir’s death. She began to age as no power before her had done. It was a casual passing of youth, slight wrinkles forming in her face as her hair began to sprout with gray. Jace took it in stride, knowing normal powers didn’t age. Their power failed and they were dead within five or six months. The simple fact she had survived meant that although she was aging, she was not in imminent danger of death.

As her hair grew out with long strands of silver white, Aria had completely taken herself off the healing roster. The fact her honey blonde tresses were changing bothered not only her, but the inhabitants she healed. She became more reclusive, more hesitant to go to festivals and out in public.
Jace stayed with her, taking calls to heal, but otherwise remaining at the castle.

They were sitting out on the porch, Jace brushing her hair, when he finally broached the subject with her. “Aria, I know you are cautious to discuss what is happening to you, but…well, your hair is almost totally gray. I see the slight lines in your face growing more pronounced and it scares me. Do you have any idea why you are aging?”

“I’m not really sure. I think it may be because the base of my power came from Keir. I have to believe now that he is gone, and I am fading because of it. I’m beginning to feel old. I have aches I never had before. I don’t see as clearly as I once did. It is odd, but I have been alive for almost two hundred and fifty years, and to suddenly see myself aging is creepy. You would think I would be tired of life, but I am not.”

“You are not the type to crave death. I think you did after Keir died, but you got better. Maybe you have just seen too much death to want it.”

“Maybe,” she replied, turning slightly to smile up at him. “I miss the days of being in the back of the woodshed. We never go there anymore.”

“I fear your body has grown slightly too fragile to engage in such violent sexual activity. It has become harder to heal you, and you break more easily. Is normal, gentle sex all that bad?”

“Of course not. You have always been a wonderful lover. Jace, will you find another woman after I die?”

“No, you won’t. My power will fail, and the energy won’t be there to pull you into death with me.”

Jace walked around and knelt down to face her. “I didn’t know that. I was assuming I would die with you. I don’t want to be here alone. I live to be with you. I came here to be with you. Other gifted have been birthed, and there is enough positive energy here to maintain the energy field of Jasta without the two of us. I won’t remain alive when you are gone.”

“Oh, Jace, I don’t want you to kill yourself. I want you to live and be the beginning of a new bloodline. Illusan and Fantam are both joined now, and you have grandchildren to look forward to. You are a great healer, you are beautiful, and you could have your pick of new mates. Don’t give all that up.”

“I don’t want another mate. I would compare her to you forever, and she would come up lacking. Illusan and Fantam can live without me. They know how I feel about you. They are okay with the idea I will die with you.”

“I don’t know what to say. I could argue with you all sun about this, but I know you. It would do no good. I just wish you would rethink this.”

“I love you, too. Hopefully I will live another fifteen or twenty years. By Earth years I was twenty-four when I came here. If you add the years since Keir died, in Earth years I am about thirty-nine. I shouldn’t be this gray, huh?”

“I think you look closer to fifty, but that is not bad. You are still beautiful. You will always be that way to me.”

Jace laughed and leaned in to kiss her before returning to brushing her hair. 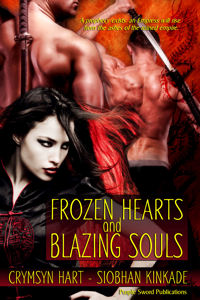