Lady Violetta is an eighteen year-old virgin about to become a wife. She once thought she would be content with an arranged match, even if her intended is an aging rake with a strange fascination for bottoms and something he calls a "trademan's entrance". But now she's having second thoughts. Perhaps the young lady is not yet ready to resign herself to a dull married life as a breeding vessel after all.

Dare she take a scandalous opportunity to experience something more when it comes her way?

On her last night as a single woman, Violetta is about to discover naughty adventure at the hands of two men - servants in her brother's household. Yes, their ménage a trois is a pleasant, unexpected treat indeed. But it is not the last surprise awaiting lusty Lady Violetta. 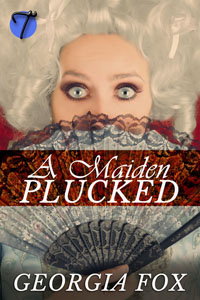 She felt his hand on her bared bottom.

Should she stop him?

Yes, of course. Although he was older, he was a servant in her brother's employ and would stop the moment she ordered it.

But why would she? She didn't want to. Again she thought of her rakish fiancé at play with his harlots. Women he had no intention of giving up once they were married.

Tulley's fingers were most agreeably caressing the cheeks of her bottom and then one hand slipped betwixt her thighs to her nether lips. The soft hair on his forearm brushed her skin, tickling with every motion.

No. She would not stop him. It felt too pleasant. And Violetta was cursed by a naughty, daring streak that had, in the past, led her to steal an entire platter of sweet pastries from the kitchen when no one was watching and take them down to the beggars at the gate, to put a frog in her great aunt's bed after a particularly harsh spanking, and to call one of her brother's distinguished guests a "brainless mule" because he said women did not have the capacity to make sound judgments on any matter, and that if they spoke up with an opinion they ought to be fed naught but water and gruel until they were cleansed of it.

Perhaps it was unavoidable— as that distinguished brainless mule had exclaimed— that Lady Violetta would get herself into very great trouble one day if her wayward streak were not sufficiently curbed. But spanking did not correct this miscreant. If anything it made her naughtier.

Yes indeed, she would not stop Tulley from touching her.

"Why, you're wet, my lady!" he whispered in her ear. "You've been enjoying your mischief this evening, eh?"

"Then don't let me stop you," he urged, pressing harder with his fingertips in a circular motion that heightened her excitement another few notches.

Before her young Gideon waited against the tree, his cock still arching proud and tall. So she took it into her mouth again and resumed sucking, while Tulley stroked her intimately with the work-roughened pads of his fingers.

"That's the way, my lady," he whispered again. "You took to that like a babe at the teat. The young lad's near to spending, I'd wager. Mind you don't get any on that pretty frock. Best swallow it down when it comes." His fingers moved faster, and heat built inside her until she could feel waves of it cascading down. "Such a juicy little pussy," he murmured. "You won't mind if I have a nibble down there when the lad's done?"

Violetta was seized by a wild spasm that shot through her body from the spot he teased. It was delightful, but left her quite incapable of sane thought for several seconds, during which she simply sucked harder at the other man's penis, nursing on it frantically until her jolting waves subsided. Then, suddenly, warm fluid spat forth from the gardener's rod and he began pumping his hips, groaning, gripping her head in his trembling hands.

As Tulley had advised, she swallowed the rush of seed rather than get any on her gown. Is that how women were got with child? By having it spill on their gowns?

Gideon emptied into her throat and then Tulley gave her a kerchief on which to wipe her lips. "Did you like that, my lady?"

"I suppose so." It had given her a small lightning flash of power to know she was pleasing the young man so much that he couldn't stop himself from misbehaving with her. But she had preferred whatever it was that Tulley did to her with his fingers. That blissful sensation was something she would like repeated. Often.

As if he read her mind, the older man said, "Lay back, my lady. And let me give you a bit of tongue."

"Tongue where?" she demanded.

"Under your petticoats. On your pink bud. Where I just touched you."

"Oh yes, " she agreed excitedly and did as he asked, falling back in the grass and spreading her legs. This must be what Lord Charles was doing under the harlots' skirts. Ha! He thought his three hussies were "fearless". She would show him that she too could be adventurous.