Sometimes finding your mate comes with a price.

And sometimes that price may be just a little too high.

Zander Laskaris has spent most of his life looking for his mate. Joining his brothers Zathan and Zavier, he joins the Tate Pack still hoping to one day find the man created to be his for eternity. The man who will be all he's ever hoped for and all he'll ever need.

Former soldier Devontae Robinson doesn't want his mate. He doesn't think he deserves him. After enlisting in the Army with his friends Derik and Lewis, Devontae returns home to the Tate Ranch under a medical discharge... and with the body of one of his friends in a coffin. He's haunted by war, by rumors, by the information that he's received about someone kidnapping paranormals and selling them on the slave market. He wants to curl up and die, not find the one man not only able to heal his heart and help him heal but to get him to fly again, but giving him the anchor he so desperately needs.

These two men will discover that Fate always knows best and that sometimes, in order to truly experience the freedom of flying, one must first give up control.

Zander walked closer to the group and noticed the mates all coming down the steps toward the stranger. As Ton took Tommy into his arms, Zander caught a glimpse of the most beautiful young man he’d ever seen in his life. His skin was the color of smooth milk chocolate, his lips full, his nose slim, and he was so short and thin that Zander knew that his own 6’8” frame would scare the younger man away. Pushing away the lust the suddenly overwhelmed him at the sight of the other man, Zander found himself still walking closer to the stranger.
When the wind blew the most delicious scent of apple pie, musk, and rainstorm his way, Zander felt his cock harden immediately and his hands shift.
Mate.
Blinking his shifted eyes, Zander stared at the beautiful black man. Devontae was his mate. His mate. He’d finally found his mate. His heart pounding in his chest and unable to hold back his exultation, he let loose a loud “MINE” and ran across the yard toward the man created just for him. He saw the looks of surprise and excitement on the faces of many of the pack members, but it was the look of pity on the faces of those closest to Devontae that almost gave him pause. Why would they pity him?
Coming to a stop in front of the young man, Zander looked into the smaller man’s eyes and felt himself falling for him instantly. Gods, Devontae was so heart-breakingly beautiful. Zander wanted to weep that Fate had given him someone as gorgeous as the man in front of him. It was only after he’d taken in Devontae’s gorgeous face that he took in the uniform that his mate wore. His mate was in the Army? Feeling his heart pound at his future lover’s sacrifice, Zander lowered his head down to the younger man’s neck and inhaled deeply. The intoxicating scent of the smaller man zapped its way through his system and wrapped around his cock.
Every part of him wanted to be inside of Devontae right then.
“Mine,” he growled softly into his mate’s ear, hearing the other man’s soft moan and feeling the sound suffuse his body.
He was so glad to know that the feeling wasn’t one-sided. His mate was just as affected by him as he was by the younger man. Gods, why did they have to be outside right now? Outside and in front of everyone. Zander wanted to do nothing more than to peel off every scrap of clothing on Devontae’s thin frame and make love to every inch of his gorgeous body.
“Gods, I want you,” he rasped out as he pulled Devontae closer to him.
“I want you too,” Devontae responded, his voice sounding small and hesitant. “But we can’t, mate. Not yet. Maybe not ever.”

Enslaved by a Rogue (MM)
Anitra Lynn McLeod
In Shelf
$0.99 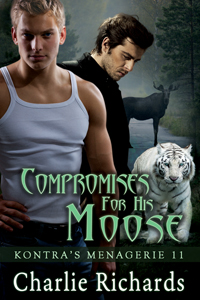