Kaya is whisked away from everything she knows after alien soldiers abduct her. She’s thrown into a luxurious prison and has to fight to keep the line between reality and fantasy visible, especially when her traitorous body wants to give in.

Besh abducts the woman without a second thought, knowing her to be his mate. He drops her off at the nearest planet in the realm, trying to give her time to come to terms with her fate but is barred from seeing her due to their cultural rules.

Lord Fatel is charged with tutoring Kaya in the ways of their society, yet is drawn to her like a moth to a flame. He faces death if he touches her, yet thinks of nothing else.

Kaya is given one month to choose if she’ll stay in their world or break free. Only the men aren’t willing to let her go. 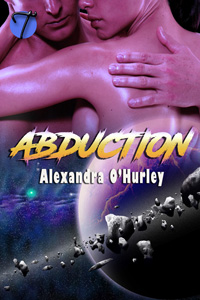 Lord Fatel returned to his rooms near those of Kaya, throwing open the elegantly carved doors and stalking down the short flight of stairs to his bedchamber. He fell backwards onto the top of the bed, replaying the scene he had just encountered with the beautiful Earthling.

Her scent still lingered and inflamed his senses, along with the feel of her fevered skin on his fingers. His dick was still painfully erect, as he was unable to forget the look of passion in her eyes. She had wanted him almost as much as he wanted her. How would he ever control his urges and not plant himself deep inside her sex, a place he craved even now?

He lowered his hand to stroke his hardness through the thin material, and his cock pulsed in his hand. He lifted his hand to his stomach and lowered it below the waistband of the soft pants. Not since he was an adolescent had he stroked his penis to find his pleasure, always able to find a beautiful woman fully able to sate his lust from the time he had entered manhood. He knew the only woman who would be able to sate this lust was but a few doors away, yet he knew it was impossible. He had to learn control around her.

He stroked his cock from base to tip, imagining Kaya’s fingers around him instead of his own, seeing her face in his mind’s eye. He gripped himself harder, pulling his passion from the engorged flesh, unable to control the emotions running through his body. Her scent still filled his nostrils as he continued to pump away at his flesh with his own hand, driving himself into a frenzy of lust and craving.

Thrusting his hand over the turgid flesh, he saw her naked form in his mind’s eye and imagined her mouth, her hands, and her cunt wrapped around his cock. The sights behind his lids brought him to the point of eruption. His seed spilled out over his hand, but once it was complete, his erection still swollen, he realized his lust would never be satisfied. His need for her was massive, and he knew he could not have her.