Animal Attraction by Lucy Felthouse When Rayne went out for her daily run, the last thing she expected was to find a naked guy in the woods, with no idea how he got there. Taking the guy home to get fed, watered and clothed, Rayne discovers that there’s much more to Claude than meets the eye. After a little digging, Rayne realises she can help solve his mystery – but she’ll have to divulge her darkest secrets in the process. Luckily, Claude takes it well and an emotionally charged moment turns erotic. Soon, Rayne is thanking her lucky stars that she ran through the woods that day.

Familiar by Sommer Marsden Sarah’s set to come into her witch powers at 25. Because as her mother once told her ‘… it’s 25 because you’re too stupid to have power before that. And 25 is still iffy.’ Since her parents are gone, Sarah’s inherited enough money to comfortably live on and her mother’s familiar, Cyrus, a red cat who’s been in her life for damn near ever. So when Sarah awakes to a handsome aroused man in her bed the night of her birthday – a birthday she sadly spends alone – she finds out why some witches resort to their familiars for damn near … everything.

Séance by Mary Borselino In their downtime between tours, a pair of musicians rent an old country house to get away from it all. It’s a chance for them to do nothing but eat toasted cheese sandwiches, have lazy afternoon sex, and explore the grounds of the house they’re staying in. The chance discovery of the planchette from an Ouija board makes them realise they’re not quite as alone as they thought.

Come With Us by Landon Dixon ‘Where have all the young men gone?’ That’s the troubling question facing Colonel K, who desperately needs new recruits for the war effort. Captain Yannsen provides the shocking answer, when he staggers into the Colonel’s office and gasps a bizarre tale of “vampeters” – women who crave the seminal bodily fluids of men, for all of eternity. Circle in the Sand by Elizabeth Coldwell Spending a week cruising the Hebrides is Amy’s idea of holiday hell, throwing into disarray all her dreams of lazy days sunbathing and hot nights making love. But her faltering relationship with Aidan is changed forever by the discovery of a bottle buried in the sand on a remote island and the powerful love spell it contains within it... 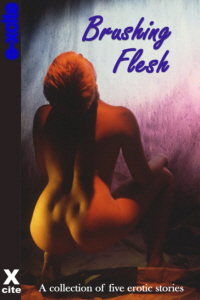