More From A Forever Home

“I’m coming,” Zane shouted. It was getting late and he didn’t know who’d be at his door at this hour.

“What the fuck, man!” Jackson said as he pushed his way into Zane’s apartment as he opened the door.

“Hello to you too, Jackson.” Zane shut the door. It didn’t take a genius to figure out why his friend was at his house.

“Zane, why do you keep doing this to yourself?” Jackson walked into Zane’s kitchen, opened the fridge, and grabbed a beer. He took a long pull, then walked back out to the living room to sit on the couch. “I just don’t get it.” Jackson shook his head.

“Oh well, hmm.” Zane put a finger to his chin as if he were thinking. “Maybe if someone would have kept his mouth shut Randy wouldn’t know about the whole apartment situation.” Zane sat down next to Jackson and took the beer from his hand to take a drink. The frothy, bitter taste soothed his dry throat.

“Are you suggesting this is my fault?”

“No, but I didn’t tell Randy because I didn’t want him to worry about me. I never thought he’d make the offer to live with him.” Zane sat up and rubbed a hand over his forehead. “Shit.”

Zane was in a tough spot. On one hand he knew living with Randy would be hard because, well, he was in love with the guy. But on the other hand he liked being around Randy and Cody. They’d become his family. All Zane had left of his family was his brother Cale and Cale lived in New York and they only saw each other maybe once a year. It got lonely not having family. But moving to Kearney had been the best decision he’d ever made. He made some great friends and even found the man of his dreams, even though said man was off-limits, life was going good.

“He’s straight, Zane,” Jackson said after a few moments of silence passed between them. “No matter how much you care about him, he’ll never be able to return those feelings in the way you need.”

“I know that.” Zane jerked to the side, narrowing his eyes at Jackson. “I’m not stupid.”

“Jackson—” Zane started to stand up, looking for a way to get away from his friend, but Jackson grabbed his wrist and yanked him back down to the couch.

“I don’t know, okay?” Zane shouted. He didn’t mean to, but it hurt knowing that to his friends he looked like a lovesick puppy chasing after something he’d never get.

“Zane, man, I’m not trying to upset you, but I worry about you.” Jackson rubbed his hand up and down Zane’s back. “I know you care about Randy, and I for one appreciate all you’ve done for him and Cody. For a while there you were the only one he wanted hanging around and I thank you for being there for him but you’ve got to think about yourself too.”

“Oh yeah? When? In between caring for Cody or spending time with Randy?” Jackson cocked an eyebrow. “Looks to me as if your time is pretty much eaten up.”

Zane wasn’t angry at Jackson because he was wrong. No, he was upset because his friend was right. Zane did spend all his time with Randy and Cody. It left little time for anything else, but Zane didn’t mind. There really was no one else he wanted to spend his time with.

“Jackson, you’re not telling me shit I don’t already know.” Zane sat back on the couch, letting his head rest on the very back ledge. “I know in here”—Zane tapped a finger to the side of his head—“Randy is only ever going to be my friend but in here?” Zane laid his hand over his chest. “It’s a little harder to accept. I know Randy’s straight and even if he wasn’t he’s still not over Liz. I have absolutely no shot with the man, but I still like his company. He needs me and I want to be there for him.”

“I can understand that.” Jackson finished off his beer. “But while taking care of him you can’t forget to take care of yourself, Zane.” Zane nodded. “I worry about you, Zaney-boy.” Jackson nudged his knee against Zane’s. “You’re like the younger brother I never had. Granted not as good-looking as me but…”

“You’re an ass.” Zane laughed as he shoved Jackson in the arm. “I don’t know how Joe puts up with you.”

“Me either, but I’m thankful every day that he’s in my life.” Jackson reached out and rested his large, warm hand on the back of Zane’s neck. His palm was dry and rough with calluses, but it comforted Zane knowing he had such a good friend in Jackson. “I’m not going to tell you what to do, Zane. You’re a big boy. Just please don’t let life pass you by because you’re waiting around for something that will never happen. You deserve to find someone who’s going to love you the way you ought to be loved. Don’t forget that.”

All Zane could do was nod his head at what Jackson said. His throat was tight and his mouth dry. He knew what Jackson said was true. He didn’t stand a chance with Randy, but knowing it and hearing it voiced aloud were two different things. And worse was that he just willingly agreed to live with the object of his desire. He must be a glutton for punishment.

“Okay, Rand, into bed you go,” Zane said softly as he lowered Randy to the bed. Zane went to his knees and unlaced Randy’s shoes, then pulled them off. He then took off Randy’s socks and rubbed the tops of his feet. It was wrong, but Zane couldn’t get enough of touching Randy’s body. Zane slowly worked his hands up Randy’s legs toward his knees. “Come on, big guy. Into bed you go.”

“Please, don’t leave me.” Randy’s voice was low and rough when he spoke. Zane looked up at him.

“That’s not what I meant,” Randy whispered as he leaned in close to Zane. Zane held still not knowing what to expect. Randy’s fingers dug into Zane’s shoulders, squeezing tight as he leaned even closer and pressed his lips to Zane’s. Randy let out a shuddering breath, then pressed forward again.

Zane gasped at the soft press of lips against his own. He’d dreamed of this for so long but not like this. This was all wrong. Randy was drunk and not in the right frame of mind to be doing something like this. No matter how much Zane wanted this he had to put a stop to it.

“Randy, we shouldn’t do this.” Zane tried to pull away, but Randy tightened his grip. “You’ll regret this in the morning.”

“There are a lot of things I regret.” Randy pulled back just enough to look in Zane’s eyes. “This won’t be one of them.” Randy lunged forward and covered Zane’s lips with his own. The kiss was rough and hard and it caused Zane’s cock to plump up to full mass. A loud moan filled the air and Zane wasn’t sure who that came from. “I need this.”

Zane knew it was wrong, but he could understand Randy’s need to feel loved and wanted almost as if it were a tangible thing he could hold on to. He wanted to make Randy feel good and if this was all it ever was, then he’d take it.

“It’s okay, Randy.” Zane stood up and pushed Randy back on the bed, then climbed on top of him, straddling his hips. “I’m not going anywhere.”

Randy fisted his hands in Zane’s hair and pulled him into another hard kiss. Their teeth clanked together and Randy nipped at Zane’s lips until he drew a little blood. Zane didn’t mind though. It was perfect. Randy’s aggression and desire fueled Zane’s that much more. Zane lowered his hips to rest over Randy’s and ground his hard cock into Randy’s.

“Oh God, that feels good,” Randy gasped. He scraped his fingernails down Zane’s back until he reached his ass, then fisted the hard muscle in his grip, pulling and kneading it.

Zane only had on an old pair of loose-fitting sweatpants. The tip of his cock was peeking out the waistband, head glistening with the first drops of his pre-cum. The more Randy groped at him and thrust his hips upward into his ass. Zane knew he had to have more. He broke the kiss and Randy whimpered from the loss. Zane kissed his way down Randy’s stubble covered jaw and neck. He tugged at Randy’s shirt until he got it over his head and off his body.

“So fucking beautiful,” Zane mumbled as he stared down at Randy’s solid chest covered in a smattering of black hair. Randy oozed masculinity and it turned Zane on.

Zane dove down and sucked at Randy’s right nipple while he plucked at the left one, getting it nice and hard. Randy groaned and thrust his stiff cock harder into Zane. Zane could feel the hard length and it was huge. He couldn’t wait to put it in his mouth. Zane worked his way lower, leaving a wet trail from his tongue in his wake. Randy’s skin tasted of salt and his soap and it was delicious.

“Is this okay?” Zane asked as he started to unbuckle Randy’s jeans.

“Fuck yeah.” Randy reached down to help him. Together they shoved his jeans and boxer briefs down his thighs. His long fat cock flopped up to smack him in the stomach. Randy reached down and curled his fingers around the hard length, stroking himself.

Zane’s mouth filled with drool as he watched Randy pleasure himself. His cock was red and thick and drops of his pleasure ran down the veiny shaft. It made Zane hungry for a taste. Zane leaned down and lightly flicked his tongue over the weeping tip. Randy’s body jerked and he released his hold on his cock and put them on the top of Zane’s head, guiding him gently toward his pulsing erection. Zane opened his mouth and sucked in the blunt tip and hummed at the sweet, salty goodness that cascaded over his taste buds.

Zane fed more of Randy’s cock into his mouth. He rubbed his tongue under the fat tip, then flicked upward to tease the small opening. Randy growled and his fingers tightened in Zane’s hair. Zane couldn’t believe this was happening. It only ever happened in his dreams. 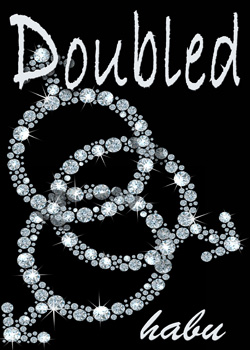 His Reality (MMMM)
Casper Graham
In Shelf
$3.50
Tweets by
sirenbookstrand